A Womb in the Shape of a Heart: My Story of Miscarriage and Motherhood 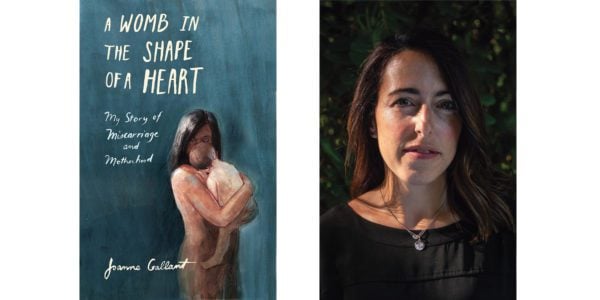 Being human means being made up of countless invisible, uncontrollable processes: muscles contracting, neurons firing, cells dividing. Each of these processes has the potential to go catastrophically wrong, and many of us carry in us something that might hasten that potential, a mutation or malformation that stays quiet until it doesn’t. Bodies are full of secrets, something that Joanne Gallant knows all too well.

Gallant details her discovery of these secrets in her debut memoir, A Womb in the Shape of a Heart. For many years, Gallant seemed to lead a charmed life: she married her university boyfriend, found a fulfilling career as a pediatric nurse, and bought a house by the water in her home province of Nova Scotia. When she and her husband first try to conceive, she is confident that there won’t be any major hurdles. But at age 30 her first pregnancy ends in a devastating loss, a loss that comes with a set of diagnoses: endometriosis, uterine fibroids, and a bicornuate uterus, also known as a heart-shaped uterus. In the following years, Gallant experiences several more pregnancy losses as well as the premature birth of a son. In clear, heartfelt prose, she tries to make sense of the broad spectrum of emotions that her reproductive journey has put her through: the grief, the joy, the fear, the hope, and everything in between.

The main questions when it comes to memoirs in general, and this one in particular, are: who is this story for and why is it being told? Sometimes the events described in a book are so bizarre and fascinating that the answer is obvious; with other books, readers might get the sense that the story is told more for the benefit of the writer than anyone else, a sort of cathartic testimony. Then there are books like Gallant’s: quiet, deeply personal stories whose themes echo far beyond the confines of the specific experiences they describe.

That representation in media matters has become a bit of a trope – it’s been hashed and rehashed many times, and there are valid critiques about using it as the single lens through which to view a work – but there remains something electrifying about seeing an aspect of yourself on the page or screen. Many, many people will see themselves in Gallant’s story. Her writing is particularly poignant and relatable when she talks about the sense of shame and failure she feels about her body, the way she blames herself for each loss, even though she knows those feelings aren’t rational. Hers is a welcome addition to the growing chorus of voices speaking about their struggles with reproductive health.

Gallant’s writing is unfussy and engaging, and her book deserves to find a broad audience. For all those living silently through infertility, multiple miscarriages, and other reproductive issues, A Womb in the Shape of a Heart will be a lifeline.