★Journey Around the Sun: The Story of Halley’s Comet 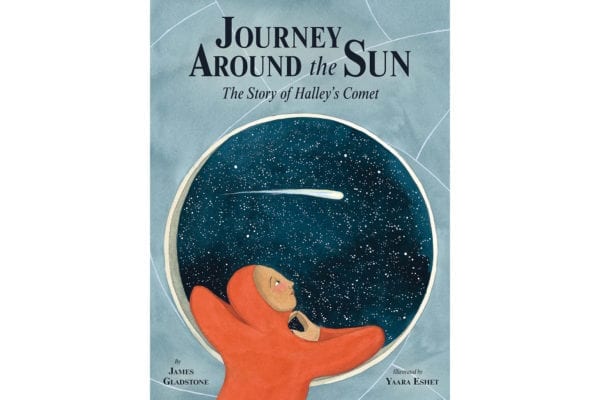 For the scientist, the artist, and the stargazer alike, the cosmos abounds with endless wonders. Chief among them is the once-in-a-lifetime event of seeing Halley’s comet.

In the STEM picture book Journey Around the Sun: The Story of Halley’s Comet, James Gladstone, winner of the Norma Fleck Award for Canadian Children’s Non-Fiction for Turtle Pond, joins forces with illustrator Yaara Eshet to take young readers on a voyage that begins centuries ago.

The tale is told by Halley’s comet itself, imbued with “sight, thought, and speech” to share what it has observed of us. From cave people to space people, Halley’s comet narrates how our understanding of it is “woven through human history in drawings, paintings, and words.” Halley’s comet has been believed to be many things: a fire burning in the sky, a planet with a glittering tail, even a harbinger of misfortune that elicited fear and superstition. That is, until Sir Edmund Halley – after whom the comet is named – suggested those previous sightings had all been a comet on its orbit around the Sun. He proved his theory by correctly predicting it would return in 1758.

Alongside the narration, in smaller font, is the historical record of the comet, beginning in Cairo in 989 C.E. and ending – at least for now – with 1986’s Halley Armada, a group of space probes launched by Russia, Japan, and the European Space Agency to gather data to be sent back to Earth.

Accompanying the text are Eshet’s gorgeous full-page watercolour and ink illustrations that capture the enchanting celestial blue of the night sky dotted with stars. As readers move across the globe and through millennia to visit long-ago civilizations, her rich palette shimmers with the introduction of pinks, peaches, and yellows. In one spread, Eshet makes use of panels to highlight pivotal depictions of Halley’s comet throughout history, including a portrait of 15th-century German astronomer Regiomontanus with an astrolabe, which was used to estimate distances between Earth and objects in space. Her whimsical paintings effortlessly demonstrate that though much has changed over the years, we continue to be utterly fascinated by Halley’s comet.

It’s rare to come across an informational picture book that offers the perfect mix of fact and wonder. But Journey Around the Sun: The Story of Halley’s Comet is one such gem: a cosmic road trip sure to delight any reader who has ever looked up toward the heavens in awe.