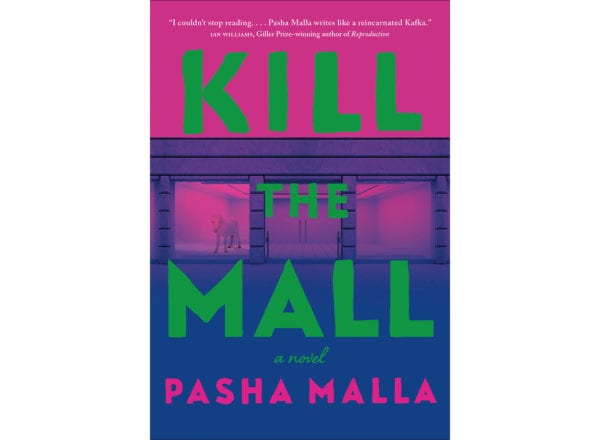 Pasha Malla’s third novel opens with a love letter in which the unnamed narrator expresses his undying affection for the “remarkable institution” that is the local mall. He is applying for a residency program at the commercial property. As the successful candidate, he lives in the mall, sleeping in a converted storefront that is locked each night and eating all his meals at the food court’s single open restaurant. He’s also expected to hand in weekly progress reports, although no details are ever given as to what kind of progress he should be making. In addition to this unusual arrangement, it becomes clear this particular mall hides a rash of peculiarities; one disturbing hint that something is off is the inordinate amount of hair in the hallways.

The mall is reminiscent of a haunted house, beautiful and mysterious at the outset, but beneath the grand exterior a malicious force lies in wait. Using concise descriptions, Malla focuses on light: the “green wash” of the parking garage, the “yellow drone” of the food court, and the “blue-tinged gloom” of the hallways. These subtle cues signal comfort or impending danger depending on which level of the mall the narrator is investigating. The building gradually mutates into a destructive antagonist, anthropomorphizing while the storyline devolves into a series of surreal events linked by regular appearances of hair as a kind of leitmotif.

The narrator’s inner dialogue is rich with imagination and wit. His snide remarks and misplaced bravery are welcome sources of humour, yet his conflicting reactions prompt the reader to suspect his observations are biased at best and delusional at worst. A snarky bundle of absurdity and horror, the narrative swings wildly between eerie explorations of Stephen King–like hallways to fond recollections of a completely fictitious marriage. The brief appearances of other characters in the story serve to break up a monotonous routine for the narrator but do little to move the plot along.

Despite the protagonist’s initial proclamations of love for the commercial outlet, his residency takes place in a mostly uninhabited commercial space with only a handful of open stores, so shopping is extremely limited. The closest he gets to a consumer experience are his weekly progress reports, which resemble infomercials: gratuitous musings on random things mentioned in previous chapters including cars, bathrooms, even horses. The frantic preparations for an upcoming blow-out sale and mall renovation crescendo into a surprisingly dream-like conclusion.

When an entire novel takes place inside a mall, one expects a grand message on the impact of commercialism or the evils of materialism. Instead, Malla shepherds readers through the dark recesses of one man’s psyche. Once the end has been reached a decision must be made: have we been privy to a well-intentioned hero trapped in an evil building or the product of one man’s fading sanity? Or both? No matter what one ultimately decides, Kill the Mall remains an imaginative romp through a familiar landmark and cultural touchstone.