Man at the Airport: How Social Media Saved My Life – One Syrian’s Story 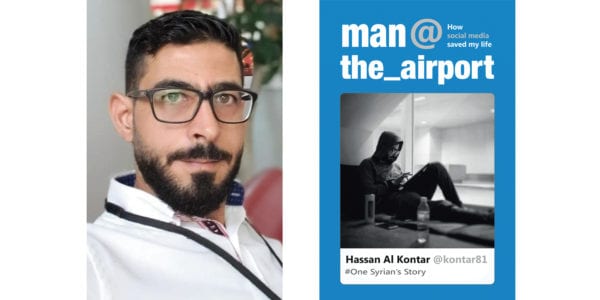 Man at the Airport is a testament to the power of one man’s quest for asylum, and how social media has the ability to harness that power – but this book is much more than that. It’s a window into Hassan Al Kontar’s ingenuity, resilience, and determination not to be drawn into the war in his homeland. A Syrian from the minority Druze community, Al Kontar begins his story by recognizing Indigenous Peoples’ struggle in his new home, Canada: “We also have been forced by circumstances to leave our land and the people we love behind.”

Throughout his harrowing journey to find refuge, Al Kontar provokes the reader into questioning the ways in which we choose to remember and what gets omitted from our stories. He recalls his hometown with palpable painterly detail: “If it’s true that the man is the son of his environment, then the people who live in Sweida are shaped by land that, despite the olive farms and some seasonal crops, is barren – an endless horizon of medium-sized black rock hills full of caves housing hyenas, wolves, snakes and scorpions, dotted with wild pistachio trees dating back to Roman times.”

Compelling and heartfelt, Man at the Airport reads as if told by a friend you would stay up all night listening to. Al Kontar reveals his moral fortitude in a multitude of ways – from his early days working legally and illegally in the United Arab Emirates, where he observed how the disenfranchised upheld the country’s reputation of wealth and success, to choosing a different career path despite his father’s best intentions for him.

After losing his work permit in the UAE, Al Kontar was deported to Malaysia but denied entry. The Kuala Lumpur airport became a purgatory Al Kontar was confined to for months. Despite his appeals, requests, and attempts to seek asylum elsewhere, officials were unfazed by the consequences of sending him back to war-torn Syria. Where is sanctuary to be found when there is no compassion? Email after email ignored, he turned to social media, his only hope of being heard. After a few unsuccessful starts, Al Kontar eventually found solidarity in an online community of well-wishers, journalists, and fellow refugees, leading him to find a home in Canada, settling in Vancouver. Al Kontar also bears witness to how social media can become a double-edged sword; his hope was to be met in his humanity, but “messages began to reach me on Twitter: coward, traitor, weak, fugitive, extremist, criminal, terrorist.” Standing on shaky ground, and hyperaware of even the smallest decisions, Al Kontar remained true to his convictions, despite others’ desires to claim him or shame him.

In his introduction, Al Kontar states that he does not think of himself as a writer: “They use big words that no one can understand, yet you feel the music in them.” Yet Man at the Airport has a musicality all of its own, sung to us with honesty, grace, and astonishing courage.