Nothing the Same, Everything Haunted: The Ballad of Motl the Cowboy 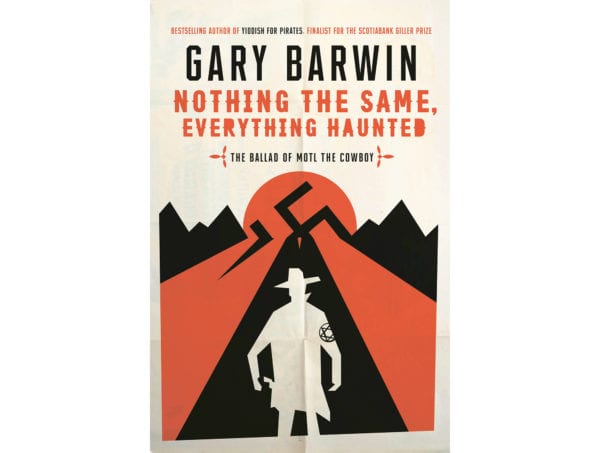 Can one write a humorous book that grapples with the Holocaust? Gary Barwin has the chutzpah to pull it off, for the most part, in his second novel. Readers who enjoyed the verbal pyrotechnics and exuberant scenarios in Barwin’s 2016 novel Yiddish for Pirates – shortlisted for both the Scotiabank Giller Prize and a Governor General’s Literary Award and longlisted for this year’s Canada Reads competition – will not be disappointed.

The story opens in 1941 and centres on the narrator’s grandfather Motl: a “Jewish cowpoke,” “Brisket boy,” and 45-year-old nebbish who lives with his mama. Motl fantasizes about being a macho cowboy, “riding the dusty range beside purple sage,” a gunslinger capable of taking on the Nazi threat.

He flees Vilnius, Lithuania, as friends and neighbours are murdered around him, and he is separated from his mother and sister, uncertain whether they are dead or alive. Motl launches a Don Quixote–like quest, accompanied by his horse, Theodor Herzl (named after the father of the State of Israel). Their mission: to rescue relatives and keep the Jewish family line alive through procreation. “In this time of murder and loss, to make new life would be to make life new.” However, there’s a catch: his testicles were cleanly shot off in the First World War, lost in a glacier in the Swiss Alps. As luck would have it, they froze, awaiting a seminal reunion.

He meets and falls in love with Esther, a Jewish woman who has lost her family, and the two travel across Europe and back to the Swiss Alps in a cascade of picaresque adventures and narrow escapes from Himmler, circus performers, double agents, and “Indians.”

Motl realizes that he identifies more with Indigenous Peoples than with the western cowboys he’s always idealized: he draws parallels between the genocide of the Jews and various Indigenous populations. At the conclusion of the story, when Motl, now in his mid-80s, comes to the Wandering Spirit Survival School in Toronto to talk about the Holocaust to Anishinaabe kids, he says, “Natives and Jews. We’re like a rash. … We refuse to die. So, you and me, we’re genocide buddies.” Yet conflating these two peoples and their struggles threatens to blur their individual identities and histories.

Barwin is a talented and prolific artist comfortable moving between vocations – poet, children’s book author, composer, and multimedia artist – and this novel showcases his signature style and strengths: acrobatic language bursting with puns, rhyme, alliteration and all manner of wordplay, madcap escapades, and a sprinkle of slapstick. However, the breakneck pace of the plot and the avalanche of jokes bury the opportunity for deeper character development. Some readers will be worn out. If Motl and Esther were given space to breathe and the depth they deserve, this novel would have greater emotional impact.

The Holocaust is a living trauma for many and Barwin’s novel may invoke controversy and raise questions. Does comedy ease the pain of atrocity? Is it necessary to diminish the horror of the Shoah in order to make humour possible? Does the novel make comedy out of the Holocaust?

To Barwin’s credit, scenes of atrocity are written in a sober style and short staccato sentences, which stand out in sharp relief to the humour: “The man raises his club and beats him. With each blow, the assembled crowd cheers. Assistants pile the fallen onto the heap of already dead Jews.”

Nothing the Same, Everything Haunted brings to mind the 1997 Italian film La vita è bella. In it, Guido, a Jewish waiter, shields his son from the horrors of a Nazi death camp by weaving stories; he uses his greatest gift – imagination – to comfort his child. Like Barwin’s novel, the film dared to find humour and tenderness in the Holocaust.

Barwin employs humour, hijinks, and wordplay in a sly commentary on the evils of racial persecution and colonialism. As the narrator muses, “How we find ourselves in a particular moment, a triangulation between tragedy, absurdity, and beauty … and it feels like we’ve stumbled on something built into the fabric of the universe.” This wildly inventive novel plays by its own rules. In Barwin’s world, imagination is freedom, and comedy, courage.