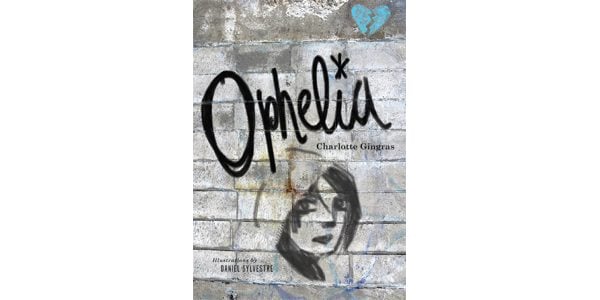 No one texts in the YA novel Ophelia, or Snapchats, plays video games, or watches YouTube. The characters still do teenager-y things – graffiti alleyways, have sex, gossip, bully, and body shame each other – they just do it in person instead of on social media. It could be that Montreal author Charlotte Gingras has set her work a couple decades in the past – the book never says – but more likely she eschews all the techy noise in order to quietly explore how painting, writing, and building things with your hands can be the outlet that helps a person get through the hell that is high school.

The main character calls herself Ophelia after seeing a production of Hamlet and finding beauty in the prince’s girlfriend after she drowns herself: “as though she were asleep on the riverbed.” The other students call Ophelia “rag girl” because she hides herself under layers of oversized clothes (think Ally Sheedy in The Breakfast Club).

Ophelia rarely speaks at school until one day an author visits her Grade 10 class and she’s engaged enough to ask, “Why do you write? What’s the point in writing?” Afterward, the speaker – named Jeanne D’Amour – gives Ophelia a blue notebook, with the author’s address written in it. From then on, the novel takes the form of Ophelia’s one-way conversations with Jeanne, which she composes journal-style in the notebook.

A classmate of Ophelia’s also breaks his sullen silence during Jeanne’s talk, telling her, “Last summer, I wrote postcards to myself on my holiday by the sea.” Despite being laughed at by his peers, he approaches Jeanne for an autograph. Later we learn he calls himself Ulysses. But Ophelia calls him “fatso.”

Early in the novel, these loner characters separately stumble upon an abandoned warehouse. Ophelia describes it as a “secret place … far from others and all the noise they make.” She takes to drawing on the interior walls of the building, expanding from the small graffiti hearts she draws around the city to a large-scale fresco of an upside-down girl floating in water. Ulysses has found an abandoned vehicle in the space and is taking apart its engine motor, hoping to get it working and use it to travel. But mostly they’re escaping life at home. Ulysses has a dysfunctional blended family and Ophelia is being raised by a single mom who has made some devastating mistakes. (Ophelia was sexually violated by one of her mother’s boyfriends at age 10, and also spent a year in a foster home.) They’re not keen on sharing this hideout, and Ulysses draws a line down the middle of the room. How they come to cross that line and fall in love is a slow, uncomfortable, and ultimately beautiful journey.

Gingras has published many well-received French novels for young people and twice won the Governor General’s Literary Award. In Ophelia, she succinctly captures adolescent agony – how those hurting the most can also be the cruellest, while the ones who seem the most scared can be pushed into grand heroics. The narration and dialogue are raw and moving – thanks to a deft translation by Christelle Morelli and Susan Ouriou (Louis Undercover) – and is sprinkled with poetic moments: “I’ve got nothing to say about my mom and me. Nothing. A total desert.”

Daniel Sylvestre’s black ink and collage-style illustrations, which are meant to be Ophelia’s doodles and sketches, add texture. Whether it’s depictions of robots, monsters, icebergs, female figures, or just abstract chaos, the drawings are exactly what you’d expect to find in a notebook toted around by a moody and artistic teenage outcast; there’s plenty of beauty alongside the mundane. It’s exhilarating to see Ophelia’s transformation from angry and traumatized to open and alive. Gingras has closely tied this journey to writing and art and the courage it takes to share those things with others.