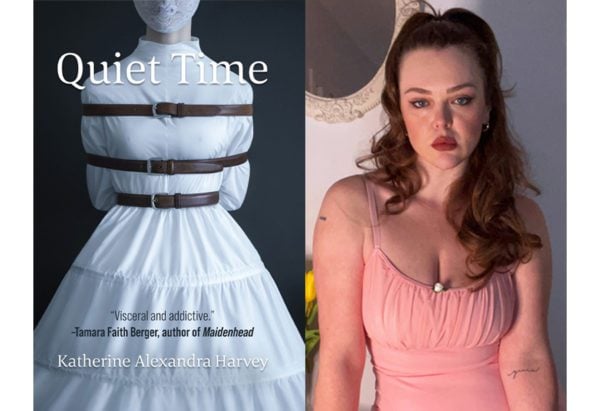 “Have you ever heard of kintsukuroi?” Grace’s therapist, Trevor, asks her near the end of Katherine Alexandra Harvey’s grim, piercing debut, Quiet Time. “It’s this amazing Japanese art form. … they repair vases that have been broken. They piece them back together, bit by bit, and use gold to fill in the cracks. … More beautiful for having been broken, they say.” Trevor offers this image to Grace as a metaphor for her life, but it also serves as a metaphor for the novel’s fragmented structure: its jagged pieces are held together first by trauma, then, more tenuously, by forgiveness.

The redemptive promise of the novel’s final sections is hard-won, both by Grace and by the reader. “What the fuck is wrong with you? Why do you want to be broken?” demands Grace’s lover, Jack, as their tempestuous relationship – around which much of the novel’s action turns – approaches its final dissolution. His angry words unfairly blame Grace for the damage done by her stern, unloving father and erratically absent mother, as well as the trusted teacher who sexually abused her. They also evade his own complicity in her self-destructive behaviour, especially the drug use that helps Grace escape from her pain. Though Jack, an artist, calls Grace his muse, there is no tenderness between them. Harvey’s depiction of their dope-addled exploits and conflicts is unsparing and ugly, as is her portrayal of their fraught and often rough sex life.

Harvey is also uncompromising in her depiction of Grace’s mental illness, which manifests in cutting (“I needed to see my blood to make sure I was real”), panic attacks, a psychotic break, and a suicide attempt. Some of these crises are triggered by events in her adult life, including the stillbirth of her baby and Jack’s discarding her for someone else. At the heart of her struggles, though, is an intrinsic “melancholy” she eventually recognizes as part of her mother’s story too. “I could feel her,” Grace says; “Panicked and small and young and trapped and not yet ready.” What was abandonment to Grace was escape to her mother. Grace’s identification with her mother’s suffering is a key step toward understanding her own.

In her chaotic despair, Grace sometimes feels as if she’s “cracking into smaller pieces, each morsel stringing, viscously adhered to my foundation.” It’s Trevor who proposes that she might have the means of her own restoration at hand. “You’re a writer,” he tells her; “That’s an incredible gift. You need to use it.” It helps – though the process of recovery is neither easy nor direct – and out of the pain does eventually come hope and the possibility of joy. This glimmer of light after so much gloom is welcome, even necessary; Quiet Time is difficult and often unpleasant to read, but Harvey adds just enough gold to make her harsh vision bearable, and maybe even something in which we can find traces of beauty.