★Tongues: On Longing and Belonging through Language 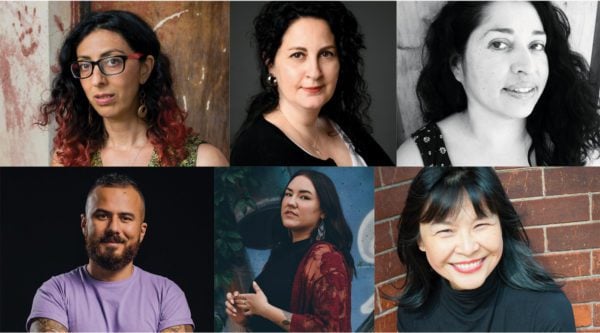 An anthology of painstakingly crafted essays, Tongues: On Longing and Belonging through Language explores the complexities of language and how it impacts identity, culture, and lived experience. The editors Leonarda Carranza, Eufemia Fantetti, and Ayelet Tsabari, who all in some way lost their mother tongues or ancestral languages, confess the irony of the essays being written in one language, acknowledging the colonial implications of using only English. However, this collection captures the intersections of language in its many manifestations.

The contributor list is a who’s who of the most brilliant new voices in CanLit – such as Téa Mutonji, Rowan McCandless, and Carrianne Leung – each adding to the kaleidoscope of the whole. The editors have actively resisted a tokenistic approach of “one voice speaks for one language” by including more than one contributor who experiences the same language or culture.

With this refreshing editorial approach, the anthology encourages reflection and engagement. The collection deepens in nuance with each piece, reminding the reader that language is not always limited to speech and writing; it can be an experience beyond both. Karen McBride writes of her childhood experience of conversing with frogs: “This is, perhaps, my first remembered experience with the visceral and deep connection we form with land language that isn’t taught but still learned. Every sound we let slip is foreign, filled with words that will remain unknown. And yet we glean some understanding, and there we take pride in a shared mysterious conversation with our amphibian counterparts.”

While language can connect, it can create a double exile, especially for immigrants, and some writers confront the shame of forgetting a language or how that loss is received by other native speakers. This shaming can lead to self-silencing. To reclaim language, writers attempt to revisit their homeland, only to realize that it doesn’t exist except within the mind, as Kai Cheng Thom writes, “A ghost limb reaching back through time, trying to hold on to a place I’ve never been.”

Many contributors, such as Danny Ramadan and Jenny Heijun Wills, come to terms with this separation in their own way. Kamal Al-Solaylee writes of returning to Arabic, but as a relic: “My comprehension has improved but my spoken Arabic remains frozen in time. Colloquial Egyptian has moved on. When I tried to speak it with my sister and her children, they laughed it off because I sounded like a matinee idol from the movies I used to restore my Arabic.”

Other essays reflect on how we exile ourselves through our choices in language, such as italicizing “foreignness” and the barriers that it creates, as Rebecca Fisseha explores in “Say Something in Your Language.” Ashley Hynd, in “The Seven Grandfathers and Translation,” reflects upon translating between languages, particularly in her own work between Ojibwe and English. For her, translation is a relationship: “the act of translating is not isolated in a moment. It is organic, in motion, alive in many moments. It can be a hard choice as a poet who writes in two tongues – how much to give and when.”

Across the anthology, there is a palpable sense of loss in the ability to communicate between generations. Taslim Jaffer, whose father lives with her young family, desires to keep Kutchi and Kiswahili alive on her children’s tongues. After bearing witness to the estrangement her own children felt on their first trip to Korea, Janet Hong spent quarantine teaching her eldest to read Korean – one step toward reinvigorating language and cultural understanding in her children’s lives. Jónína Kirton mourns the loss of both of her ancestral languages, reflecting on the intersections of privilege and trauma she experiences as a result.

As evidenced by the longing of many contributors, the language of loss cannot be fully translated. However, as Sahar Golshan reminds us, grief can open a pathway to the heart: “My body has inherited exile and I may never access Iranian soil, but the presence of these plants reminds me of my connection to here. … I kneel in a place that holds me firmly as I grieve.”

Some of the most fascinating and unexpected pieces in the collection are from Amanda Leduc, Logan Broeckaert, and Adam Pottle, who write of language as a barrier experienced in the body, with lived consequences. As Leduc puts it, “Ableism in language is different – sneaky, mundane, less apt to draw attention. Subtle.” In Pottle’s essay, “Newborn,” he notes the challenges of writing in sign language and the othering experienced between the words: “English does not translate directly into American Sign Language. Sign Language grammar is closer to Japanese than to English. To ask, ‘What is your name?’ in ASL, one says, ‘Name you,’ while lowering one’s eyebrows. Facial expressions are as much a part of grammar as the signs themselves, and I had to keep this in mind while writing.”

Astonishingly consistent in calibre, Tongues: On Longing and Belonging through Language poses questions that leap beyond the page: How is language received in the body? What is lost in the space between words? What cannot be recovered? What remains to be uncovered? It is one of the finest anthologies published in recent years and should be required reading on syllabuses across the country.