I’m talking specifically to all those white, cis-gender, non-disabled authors who wring their hands about publishing’s increased diversity, equity, and inclusion (DEI) efforts, believing that DEI will be the death of their careers. I mention this because it was one of the sections that jumped out at me while reading The Writers’ Union of Canada’s Diversity in Canadian Writing: A 2020–2021 Snapshot report published in June. Here’s one particularly telling quotation from an anonymous respondent:

“Caucasian writers are no longer valued in this industry ​​… I believe in ‘own voices,’ but it has been [taken too] far.”

First of all, #OwnVoices is dead. It was blown out of the sky like a clay plate in a skeet shooting session a few years after publishing adopted it. Why? Well, as I mentioned in my post-mortem for the movement, the publishing industry – largely run by privileged higher-ups in suits – decided it would be cute to turn people’s identities into cynical marketing categories that shoved human beings into boxes.

Speaking of boxes: “I feel that I received more professional supports much earlier in my career. I feel less supported now as a middle-aged, mid-career, white writer, and have actually been told in some cases that this is because I haven’t ‘ticked all the boxes,’” said another anonymous respondent.

As a Black children’s author and a member of the illustrious five per cent of BIPOC authors who published between 1950 and 2020 (because during those 70 years, 95 per cent of fiction published was written by white authors), allow me to roll my eyes. The truth is, despite the whining of the privileged, these spaces still largely benefit them. Looking at what she calls the Scarcity Myth in children’s publishing specifically, author Linda Sue Park crunched the numbers and found that although the number of books published by BIPOC authors increased between 2018 and 2019, so did the number of books by white authors. Not only was there no decrease in opportunities for white authors, but the number of white-authored books also had the greatest increase among all categories. It’s time we stop messing around. 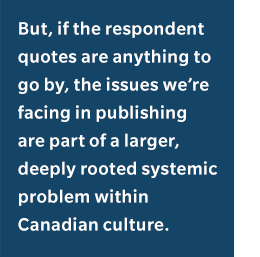 Diversity is not some bogeyman trying to pry opportunities from the withered hands of the privileged. It’s trying to even a playing field that has been stacked against some of us for centuries, and even then, progress happens at an excruciatingly slow pace, because the people in charge are still largely the people who’ve always been in charge.

As agent Léonicka Valcius mentioned in her 2017 keynote speech for Magazines West, publishing favours unpaid labour and inherited connections, and this isn’t conducive to those passionate-but-very-unconnected creatives in marginalized communities who can’t afford to labour long hours for unlivable wages. That’s why although I agree with The Writers’ Union of Canada’s recommendation to “ensure that gatekeepers and those in positions of power in the sector are more diverse both within publishing houses and in affiliated organizations,” there needs to be a greater effort in making sure publishing relies less on the underpaid labour of internships that shut the door in the faces of future agents and associate editors who actually need the money to pay their bills.

I think the recommendations listed in the report make sense: support writers and small presses through funding and residency opportunities, increase promotion for books and writers, and implement mandatory DEI training for staff. But, if the respondent quotes are anything to go by, the issues we’re facing in publishing are part of a larger, deeply rooted systemic problem within Canadian culture. Canada is a white-settler invader nation that has acted since initial colonization to protect its entrenched social, cultural, and economic hierarchies.

Publishing can do its part by reaching outside of its own bubble and into different spaces, for example: community outreach programs; partnerships with artistic activists; cross-country academic lecture series; and workshops and career mentorship opportunities in K–12 schools and for undergraduates. And along with the practical material support of funding and residency opportunities, there needs to be pedagogical support in changing minds and transforming ideologies. Publishing needs to take a leadership role in educating people from an early age as to why diversity initiatives matter. We need to teach people in our communities that diversity is not coming to eliminate opportunities. It is an acknowledgment of people who have historically been ignored, oppressed, brutalized, and even killed with impunity. It is an attempt to rectify systems that have normalized and sanctioned the disposability of certain lives. It is giving those lives a chance to live with dignity.

So good job, Writers’ Union of Canada, and all those taking DEI seriously. Let’s take it further.

Sarah Raughley is the Black Canadian author of The Effigies series and The Bones of Ruin. Her next book, The Song of Wrath, will publish in April 2023. She was nominated for an Aurora Award for Best 2019 YA Novel. As a freelance writer, she writes on books, pop culture, politics, and social justice. And hey, she has a PhD in English too.

Tagged with: #ownvoices, BIPOC, diversity equity and inclusion, Diversity in Canadian Writing: A 2020–2021 Snapshot, The Writers Union of Canada