Kaie Kellough may be the first person in the history of Canadian literature to be nominated for the Griffin Poetry Prize and the Scotiabank Giller Prize in the same year, but that doesn’t mean he’s had it easy. In fact, if it hadn’t been for Dionne Brand, Kellough’s third book of poetry, Magnetic Equator (McClelland & Stewart), which won the 2020 Griffin Prize in June, might never have been published.

In 2017, Kellough was participating in the Festival of Readers in St. Catharines, Ontario, which overlapped with the Queer Canada Conference, where Brand was giving a closing keynote. It was there that Brand asked Kellough if he was still writing poetry and to reach out to her if he had any material.

Though Kellough has received acclaim for his fiction – most recently, his collection of stories, Dominoes at the Crossroads (Véhicule Press), was longlisted for this year’s Giller, nominated for the Grand Prix du livre de Montréal, and shortlisted for the Paragraphe Hugh MacLennan Prize for Fiction – he had almost given up on publishing his poetry before Brand inquired about it.

“I had spent a number of years thinking I wasn’t going to be writing much poetry. I had been writing a poem a year for a few years – my practice was mostly performance and sound at that point,” says Kellough over the phone. “I didn’t think I was going to go back to written poetry, to the page, to publishing, but then I got home and I was like, man, Dionne just asked you if you’ve got something – of course you have something – find something, write it tonight!” 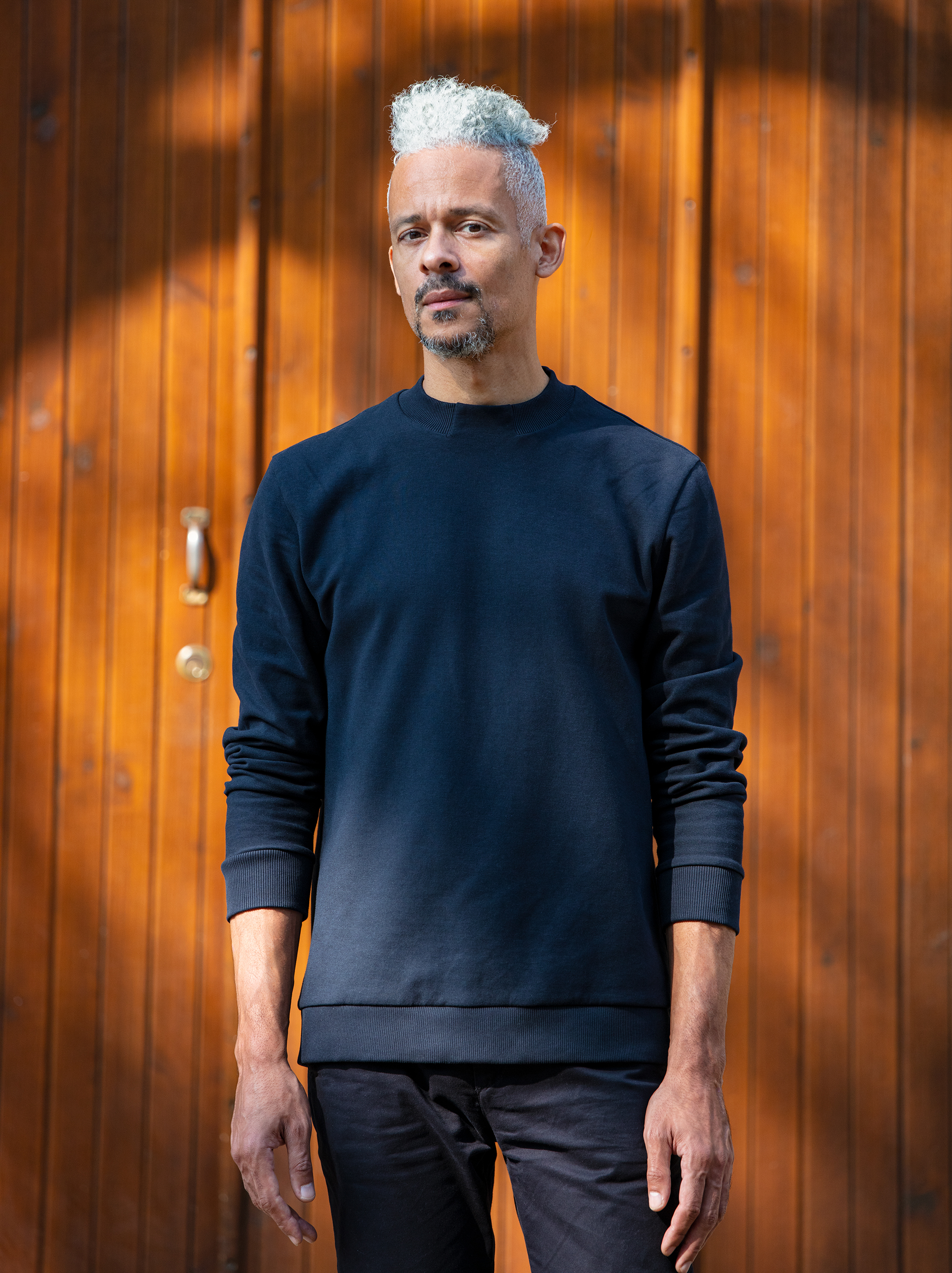 The Montreal-based poet, novelist, and performer had been writing long poems for several years. He began to shape what he found on his hard drive and noticed there was a north-south movement occurring in the poems that would later become the Magnetic Equator collection.

“I realized the poems were preoccupied with two things. They were thinking about Guyana in South America and my relationship to my Guyanese family, and to growing up in Calgary,” he says. “One of the things I’ve learned from some very interesting young Québécois authors is that sometimes a really clean and simple narrative device can provide direction in the work, so that the alternation between one section thinking through South America and the other section about North America became an organizing device sustained throughout the work.”

The term “magnetic equator” refers to an imaginary line around the Earth where the magnetic field is parallel to the Earth’s surface. But instead of encircling the Earth like the geographic equator, it meanders north and south.

This conceptual north-south framework mirrors Kellough’s upbringing. Born in Vancouver to a Guyanese family of readers, Kellough moved to Calgary when he was seven years old. He later attended the University of Calgary, where his colleague, the conceptual and sound poet Derek Beaulieu, encouraged his writing and performance pursuits.

Kellough’s poetry, like his fiction, is genre-bending, intertextual, and experimental. In one of his first introductions to the scene in Calgary, a friend invited him to give a reading.

“I was pretty young, so I wasn’t familiar with the oral tradition and terms like spoken word or dub poetry. I thought that if you’re a poet you perform and there are musicians on stage,” he says. “It’s funny how your early experiences shape your perspective. Suddenly you realize oh, this is not a universal perspective – everybody who’s a poet doesn’t think that it’s totally logical the moment the poem is written to start shouting it into a microphone next to a saxophone player!”

In Calgary, he noticed there was a distinction between poets of the page and those on stage.

“Versus might be a strong word, but there was definitely a division between poets who performed and poets who published, and I remember that really strongly. It marked me in a way because I’d never thought of there being a distinction between the two. But that distinction indicated a hierarchy where the poets of the page were in a more privileged position.” Kellough says he is often surprised that poets who write and publish don’t cultivate a performance practice.

Kellough admits he’s had to come to terms with the fact that as a writer of colour it’s not always easy to get published. Although the Canadian publishing landscape has changed dramatically in the last few years, he found it difficult to have his work taken seriously. Kellough gravitated toward the oral tradition, where he found support among Black writers and artists.

“I felt literary circles to be really difficult,” he says. “So many more opportunities were coming to me from the world of performance: opportunities to collaborate, to record, to travel. Print seemed to have dried up, and publishing always involved knocking on someone else’s door and waiting on their decision, always wondering whether I met someone else’s standard. In many cases that standard was limited and might not even value what I was attempting. It felt disempowering.”

This spring and summer, Kellough was set to perform in Hong Kong and Berlin. He was also a faculty member at the Banff Centre for Arts and Creativity, where he would have mentored emerging poets. Though all travel and programs have been cancelled due to COVID-19, Kellough’s steady stream of international and Canadian performances speak to long-deserved recognition for his work as a writer, which began more earnestly in his early twenties, when he left Calgary for Montreal in 1998.

“As a young Black person in Western Canada, I felt that in order to develop into a full human being, I would have to go to a place where there was a bit more diversity, basically where there were more Black people, more people of colour. I thought that if I stayed in Calgary, I would be permanently stunted and it wouldn’t be good for my mental health.”

Kellough acknowledges that the move to Montreal was a regional move – more than for the city itself. Cultural traffic from proximity to places like Toronto, New York, Detroit, Philadelphia, and Halifax, where there are substantial Black communities, provided the belonging he was seeking. Within a month of first moving to Montreal, Kellough saw posters for a concert by the iconic Gil Scott-Heron and the Toronto rapper Wendy Motion Brathwaite.

“Suddenly there was a scene where I could go and see Black poets performing and reading, Black musicians playing in a variety of musical genres, and I could legitimately take up some place within that conversation, I could participate. I could become part of the tradition in a way, where I didn’t feel that would’ve been possible in Calgary at the time.”

Dominoes at the Crossroads is described by its publisher, Véhicule Press, as a book that “maps an alternate Canada – one criss-crossed by a Caribbean diaspora seeking music, futures, and portals to their past.” Kellough says it emerged from “a narrative scarcity in Canadian popular culture,” one in which his voice was not represented in the dominant narrative. On making the cut for the Grand Prix du livre de Montréal, which will be announced in November, he says that it’s rare for a book by a writer of colour to be nominated. Kellough repeats this over the phone twice for emphasis. “That nod comes with a mixed feeling,” he admits. “On the one hand, it’s really nice, and on the other hand … it brings up a lot of questions that are rude and impolite to ask publicly.”

After some urging, he shares his questions in a composed but passionate manner: “Why? Where are the other names? Why hasn’t there been recognition? And what do you propose to do about that? Is there any way that other books can be recognized retroactively?”

Kellough is always trying to make room for more voices. He finds one of the most frustrating things about writing fiction to be the idea of having one narrator, and of having the story told from one perspective. He is a “big fan” of the Caribbean writer Maryse Condé and leaves our conversation briefly to pull up a Bomb magazine interview in which she discusses the Caribbean novel. In a voice that is louder than his speaking voice, Kellough reads the passage in which Condé says, “You have to find the Caribbean technique of telling a story, a polyphonous technique.”

“Essentially,” Kellough says, “my existence as a writer is a result of what Maryse Condé is trying to do – trying to multiply the voices that are able to engage the narrative. I am one of those voices, from the outside, from the margins, and so in my books I want to try to do the same thing, to multiply and open up that vocal presence.”

Dominoes at the Crossroads succeeds in seeing Condé’s layered, polyphonic vision. “In fiction, I like those unusual coincidences that could easily be dismissed but that could also say something about the way that someone’s experience in a particular moment is greater than just them,” he says. “In Dominoes at the Crossroads I think there are a lot of those, where in a very mundane moment, in the present, history peeks through.”

Although Kellough has made history for being the first person to be nominated for two of Canada’s major fiction and poetry prizes in the same year, he didn’t think it was possible. He admitted that he had been oblivious to prize culture until he was in his early forties, when his debut, Accordéon (ARP Books), was shortlisted for the Amazon First Novel Award.

“These things are impossible to predict … Having had experience with different juries – juries are political, the literary landscape is political – it’s swayed by all sorts of concerns that may or may not prioritize your work, and you don’t know how your writing will resonate with a jury of five people. It may land on each of them with unequal weight. I liken it to threading a needle, but if you had to thread three needles in a row perfectly, like in one shot. It’s so uncertain.”