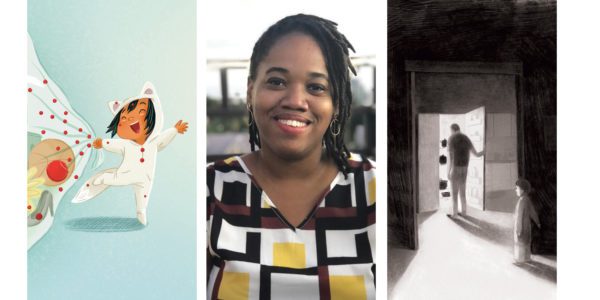 From Governor General’s Literary Award–winning author King comes the story of Lala, who decides she owns everything. From her bear to her blankie to her boots, each item gets a shiny red dot. And when Lala learns she can create her own red dots, nothing can stand in the way of this rambunctious young girl. –Inderjit Deogun

Ukpik, an Inuk girl, is eager to sew with the beautiful new beads Anaana, her mother, traded for with the Captain. But Anaana knows Ukpik needs to learn the basics of making clothing that withstands the Arctic climate first. Though the beads must wait, an unexpected surprise brings its own enjoyment. –ID

The poetic wordplay of Governor General’s Literary Award nominee Emil Sher – paired with the dazzling, incomparable modelling clay artwork of Barbara Reid – makes for a highly anticipated, lovely picture book from a dream team. Inspired by a game played with his now-grown daughters, Sher offers many creative ways to say “I love you.” –Linda Ludke

Under the tutelage of her grandmother, a child learns how to build a beehive and care for the colony in this debut picture book by Catherine Dempsey, past president of the Newfoundland and Labrador Beekeeping Association. Award-winning Newfoundland artist Veselina Tomova (The Wall and the Wind) provides the gorgeous illustrations. –LL

A breakfast table conversation between a girl and her mother encompasses big concepts like energy, plant life cycles, and photosynthesis in a child-friendly manner. Toronto author Laura Alary’s poetic rumination about how the sun nourishes us all offers food for thought. The sunny and bright mixed-media illustrations from Andrea Blinick are inviting. –LL

Muinji’j Asks Why: The Story of the Mi’kmaq and the Shubenacadie Residential School
Muinji’j and Shanika MacEachern; Zeta Paul, ill.
Nimbus Publishing, Jan.

Muinji’j has always known about residential schools, but what she doesn’t understand is why they needed to exist. This poignant story follows her Nana and Papa as they tell Muinji’j about her people, the Mi’kmaq, before all they held dear – their beliefs, their words, and their children – were taken away from them. –ID

Grieving the death of her mother, a young girl is comforted by her community. Toronto author Erin Silver explains the Jewish tradition of shiva, a seven-day period of mourning when the bereaved remain at home, receiving solace from friends and family. Edmonton artist Michelle Theodore brings emotionally resonant illustrations to this moving, heartfelt picture book. –LL

Lizzy and the Cloud
Eric Fan and Terry Fan
Simon and Schuster, May

Two of the Governor General’s Literary Award–winning brothers behind The Barnabus Project return with their next picture book collaboration, which follows Lizzy as she cares for her pet cloud, Milo, as it grows. But when Milo gets too big, Lizzy is faced with a difficult decision. –ID

As Glenn as Can Be
Sarah Ellis and Nancy Vo, ill.
Groundwood Books, April

Glenn Gould knew precisely what he did and didn’t like – he didn’t like fishing, but he loved playing the piano and had a professional career by the age of 15. Eventually, concerts became another dislike and Glenn opted to play and record in an empty concert hall, which is where he felt his most authentic self. –ID

In this middle-grade debut by Danielle Daniel (Sometimes I Feel Like a Fox), Wolf learns that she is the great-granddaughter of a tree talker – a connection her mother simply doesn’t understand. When Birchwood, her tree-house hideaway, is slated to be cut down, Wolf and her friends must find a way to band together and save their secret refuge. –ID

Expect more fast-paced ancient Egyptian action and adventure – with a hint of magic – in this conclusion to the Secrets of the Sands trilogy by Toronto’s Alisha Sevigny. A missing oracle and a mysterious priestess sect await the young scribe and healer Sesha and her friends as they arrive in the capital city of the Hyksos to find answers to a pair of prophecies and try to stop a war from breaking out. –LL

In this heartfelt examination of what death with dignity means for a family, a young child counts the seconds of their Gran’s last week of life and must find a way to say goodbye. Black and white illustrations beautifully capture the range of emotions felt by each member of the family. –ID

Montreal author and journalist Monique Polak’s latest contemporary novel is a thoughtful exploration of complex family dynamics. Twelve-year-old Justine is caught in the messy fallout from her parents’ acrimonious divorce and is used as a pawn in a custody battle. Back matter includes resources for readers who are experiencing parental alienation. –LL

Debut Toronto author Salma Hussain introduces readers to a Muslim tween growing up in Dubai, United Arab Emirates, during the 1991 Gulf War. Mona has a year full of momentous coming-of-age changes and challenges, from falling in love to immigrating with her family to Canada to pursuing her ambition to be a feminist and poet. –LL

Set in 1980s Brooklyn, Zetta Elliott’s latest follows two boys as they become friends for a single season. Themes of class and interracial friendship are explored in this novel-in-verse. –ID 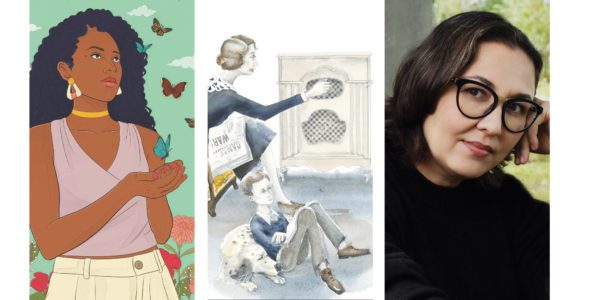 The Signs and Wonders of Tuna Rashad, As Glenn as Can Be (Nancy Vo, illustration), Danielle Daniel (photo by Gerry Kingsley)

In Hur’s latest novel, set in the 18th century, palace nurse Hyeon teams up with Eojin, a young police inspector, to investigate the murder of four women and clear the name of the one person she holds most dear. When the crown prince may be involved, the duo must discover the truth about the palace and its residents. –ID

An aspiring screenwriter tries to win over her crush before leaving for college in the latest YA novel from Natasha Deen. Tuna keeps a lookout for omens and messages from her Caribbean ancestors who have passed on, convinced they can help put Tristan Dangerfield into her arms and get Robby, her loving but overbearing brother, out of her hair. –LL

When popular debater TJ Powar and her cousin Simran become a meme – with TJ representing the “expectation” and her Sikh cousin, who does not remove her body hair, the “reality” of dating an Indian girl – TJ takes a stand. But TJ soon realizes she’s facing her greatest opponent in this debate: herself. –ID

Ever is a teen trying to cope with her father’s sudden death and her mother’s stroke. Struggling, she reaches out to other high schoolers who have also suffered trauma and forms a support group. When Ever’s peers learn the true source of her pain, they help her heal. –LL

Beginning with the trauma of a “corrective” rape, Funny Gyal chronicles Jackson’s quest to challenge both gender violence and rape culture in the Christian Jamaican society where she resides. –ID

This inclusive guide to sexuality introduces teen readers to a wide range of ideas, from arousal to body positivity and sex. From A to Z, it answers those questions teens may be too afraid or too shy to ask. –ID

The 5 Animals series is known for its eye-catching full-colour photographs and informative text. The latest entry offers a naturalist’s guide to the life cycles of monarch butterflies, eastern black swallowtails, American ladies, question marks, and cecropia moths, and also explores insect conservation, butterflies in captivity, and butterfly symbolism around the world. –LL

I Can’t Do What?: Strange Laws and Rules from Around the World
Heather Camlot and Mike Deas, ill.
Red Deer Press, March

Head-scratching edicts are explored by Toronto author, journalist, and Q&Q contributor Heather Camlot (What If Soldiers Fought with Pillows?), with spot illustrations by B.C. graphic novelist Mike Deas. How did these rules and laws come to be? How can they be changed? Sidebars, quizzes, and discussion starters encourage and facilitate critical thinking. –LL