Titles that inform, provoke, and inspire new ways of looking at the world 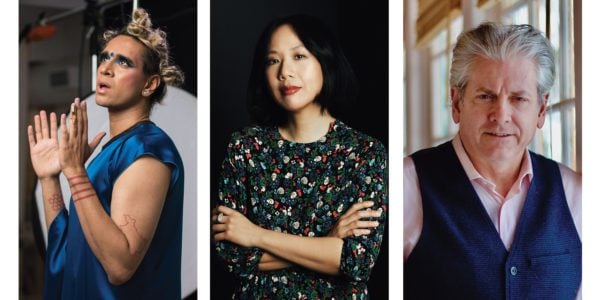 MP and author Charlie Angus looks at the history of the Northern Ontario town of Cobalt and its mining booms – first in the early 20th century, for silver, and again now, for its eponymous element. In the process, he uncovers the dark side of an industry – including its impact on Indigenous peoples – in which Canada is a leading world player. –Attila Berki

In early 2020, Robyn Maynard and Leanne Betasamosake Simpson started exchanging letters to stay connected during the pandemic lockdowns. As that year of extraordinary resistance to colonial and carceral oppressions unfolded, their correspondence reflected on the bold shifts in public consciousness around Black and Indigenous liberation. The resulting book brims with sharp analysis of our present moment and looks toward happier, freer futures. –Andrew Woodrow-Butcher

Winner of the 2020 Indigenous Voices Award for unpublished work, literary agent and poet Cody Caetano’s prose debut has already generated plenty of buzz. This memoir, completed with the mentorship of the late prolific Stó:lō writer Lee Maracle, revisits the uncertainty of the author’s childhood, teasing out the grander narratives of small moments or overlooked lives. –AWB

Have You Eaten Yet? Stories from Chinese Restaurants Around the World
Cheuk Kwan
Douglas & McIntyre, Jan.

Hong Kong–born publisher and filmmaker Cheuk Kwan explores the Chinese diaspora through one of its most salient hallmarks: food. Around the world, restaurants have served as a foothold, a place of community, and sometimes even a bulwark against cultural assimilation. Personal stories of chefs, servers, and labourers come together in this delicious tour of a truly global yet uniquely Chinese institution. –AWB

From the chaos of a queer youth to the academy, from private thoughts to public platforms, writer and educator Sina Queyras reflects on a literary life. With Virginia Woolf’s Room of One’s Own as their reference point, Rooms unfolds in multiple genres and modes to ponder what we should do in that room if we get there. –AWB

Matthieu Aikins has reported from Afghanistan and the Middle East since 2008. Leaving behind his identity and passport in 2016, he travelled with his friend Omar, a translator, as a refugee from Afghanistan into Europe. Their harrowing trek and attempts to help Omar’s family escape provide insight into the ongoing refugee crisis. –AB

Beginning with a group of Northern Californian tree poachers who head into the woods of the Pacific Northwest looking for old growth, Lyndsie Bourgon examines the histories of inequality and conservation that have fuelled North America’s billion-dollar old-growth tree–poaching industry. –Cassandra Drudi

In this illustrated road-trip memoir, artist Jon Claytor tells the story of a cross-country trip from the Maritimes to an artist’s residency in Prince Rupert, B.C., in 2019. In prose vignettes and his trademark expressive line work, Claytor explores alcoholism, love, and family as he seeks to reconcile his memories of the past with the realities of the present. –CD

Merilyn Simonds combines interests in birding and her elderly neighbour in this biography of a Swedish aristocrat turned nurse to the Dionne quintuplets and, later, a noted ornithologist and author. Studying birds near her home in Northern Ontario, de Kiriline Lawrence was among the first to recognize the decline of the world’s songbird populations. –AB

The CBC personality and indie musician charmed and entertained readers with his 2010 memoir, Adventures in Solitude, about his time spent on B.C.’s Sunshine Coast as a child. A decade on, with his family in tow, Grant Lawrence revisits the coast and the personalities of what is no longer such an isolated paradise. –AB

As you emerge, bleary-eyed, from months of various stages of lockdown, allow these spring releases to rekindle your interest in the joys and complexities that persist in the world around us.

Starting with the realization that the night sky he grew up with is not the sky marred by light pollution his children know now, academic and writer Kit Dobson explores the distances contemporary life has wedged between people and nature, what we’ve lost in the process, and how some of those strained connections might be restored. –AWB

The Hidden Kingdom of Fungi: Exploring the Microscopic World in Our Forests, Homes, and Bodies
Keith Seifert
Greystone Books, May

Canadian mycologist and executive editor of the journal Mycologia, Keith Seifert takes us through the fascinating world of mushrooms and other fungi – from the microscopic to the humongous – and their relation to our bodies and biomes. –AWB

Far more than a list of activities to keep the kids busy on long cottage weekends – though it is that too – The Big Book of Nature Connection is an invitation from the executive director of Camp Kawartha for everyone to take time to be in the place where they are. –AWB

The Ecological Buffalo: On the Trail of a Keystone Species
Wes Olson and Johane Janelle, photog.
University of Regina Press, May

Through deep research and evocative photography, Wes Olson and Johane Janelle explore the proliferation of the buffalo, their precipitous decline under colonialism, and their recent resurgence from historical, political, and environmental perspectives. The story of these beasts intertwines with the story of humanity on Turtle Island as an object lesson in ecological healing. –AWB

In this highly anticipated follow-up to his bestselling The Hidden Life of Trees, Peter Wohlleben and Canadian editor and writer Jane Billinghurst offer anecdotes of forest trekking that show us how to read all types of woodlands with expert eyes. –AWB

The Longbow, the Schooner, and the Violin: Wood and Human Achievement
Marq de Villiers
Sutherland House, May

Marq de Villiers, who won a Governor General’s Award for his 1999 deep dive into our most precious resource with Water, once again takes on a topic so fundamental to human existence we may barely think about it at all. With the three titular technologies as a trunk, this book branches out to show how wood, everywhere and for millennia, has shaped the way humans make, learn, and live. –AWB

The image of women working in the war effort as welders or munitions-makers is a classic. But when Halifax’s population ballooned during the Second World War, the women of Halifax also created a city of hearty meals, entertainment, and real community for the enlisted. This is a story of the labour women did outside their wartime jobs to build a home for the thousands who were so far away from theirs. –AWB

Women’s contributions to photography were largely omitted from early histories of the art form. In a well-illustrated volume, Colleen Skidmore explores the lives, range of work, and impact of 80 Canadian women – including Lucy Maud Montgomery – who were photojournalists, portraitists, hobbyists, artists, and printers. –AB

From teasing out the complicated relationship between mothering and creativity to taking an unflinching look at what happens when the expected path to conception goes awry, these spring books promise fresh perspectives on motherhood.

Good Mom on Paper: Writers on Creativity and Motherhood
Jen Sookfong Lee and Stacey May Fowles, eds.
Book*hug Press, May

The 20 essays in Good Mom on Paper grapple with the complicated relationship that exists between craft and kin for writers who are mothers. Edited by Jen Sookfong Lee and Stacey May Fowles, the collection includes essays by Lee Maracle, Heather O’Neill, and Jael Richardson. –CD

In Send Me into the Woods Alone, Erin Pepler examines the highs and lows of motherhood, from the physical intensity of childbirth to the emotional intensity of lying about the tooth fairy. –CD

With equal parts sarcasm and vulnerability, Morwenna Trevenen charts the roller-coaster ride she found herself on after discovering that becoming a mother wasn’t going to be a straightforward process. –CD

Not every parent’s path to motherhood is simple. Tarah Schwartz, a former TV reporter, turns her journalist’s eye inward to tell the story of her unexpected journey to motherhood and the many challenges she encountered along the way. –CD

As COVID arrived in Montreal, “post-underground” cartoonist Rick Trembles worried about the risks he faced as a person with asthma and took his self-isolation very seriously. Chronicling his solitary pandemic life in comics, he was faced with a new anxiety as the transmission numbers improved: how could he return to a world populated by hand-shakers, close-talkers, and bare-faced coughers? –AWB

While some folks relished the freedoms of isolation, artist and writer Vivek Shraya’s experience of the COVID-19 pandemic was largely anxiety-ridden. Starting with the question “Had I done the lockdown wrong?” this essay considers how a focus on caring and allowing herself to do nothing might have made 2020 look different, and what that might tell us about living in the years to come. –AWB

TEAR DOWN THE  IVORY TOWERS

From the protests of the land defenders in Wet’suwet’en Territory to the Great Resignation, entrenched power structures and old authorities are being questioned. Shake up your world with these books that point toward positive – and necessary – change.

On Class
Deborah Dundas
Biblioasis, May

From the Toronto Star’s books editor comes this reflection on growing up poor and the insights we miss when we fail to talk about class. What stories do we tell ourselves about poverty, and who gets to tell them? –AWB

In an age when expertise is in question and anti-intellectualism is on the rise, feminist scholar and zinester Alex D. Ketchum looks at how we can free critical scholarship from the academy and disseminate it in a way that serves the wider public. –AWB

Lenape-Potawatomi scholar and educator Susan Dion looks at how Indigenous ways of knowing are central to making sense of our world in its present moment. Braided Learning shows how art and story can serve as a bridge to greater understanding for Indigenous and non-Indigenous people alike. –AWB

This Has Always Been a War: The Radicalization of a Working Class Queer
Lori Fox
Arsenal Pulp Press, March

In this debut collection of essays, nonbinary journalist and writer Lori Fox considers the ways in which capitalism and patriarchy structure every aspect of contemporary life. Moving from the intimate to the broadly political, they draw from their experience as a worker (bartender, farmhand, labourer) to suggest new ways we might live and work together. –AWB

For all the references to structural racism in headlines these days, we’ve made remarkably few tangible efforts to eliminate it. In these incisive essays, actor, editor, and cultural critic Tajja Isen confronts the gulf between the huge popularity of good intentions and the urgent need for real change in the world today. –AWB

IN THEIR OWN WORDS: Memoirs from notable Canadians

Filmmaker and actor Sarah Polley confronts her past through prose in Run Towards the Danger: Confrontations with a Body of Memory (Penguin, March). –CD

Singer–songwriter Martha Wainwright, the daughter of Canadian folk-music legends Kate McGarrigle and Loudon Wainwright III, looks to make peace with the past in Stories I Might Regret Telling You (Random House Canada, March). –CD

Every superhero has an origin story, and Shang-Chi star Simu Liu tells his in We Were Dreamers: An Immigrant Superhero Origin Story (HarperCollins, May). –CD

Maude Barlow shares the wisdom she’s acquired over decades as an activist in Still Hopeful: Lessons from a Lifetime of Activism (ECW Press, March). –CD