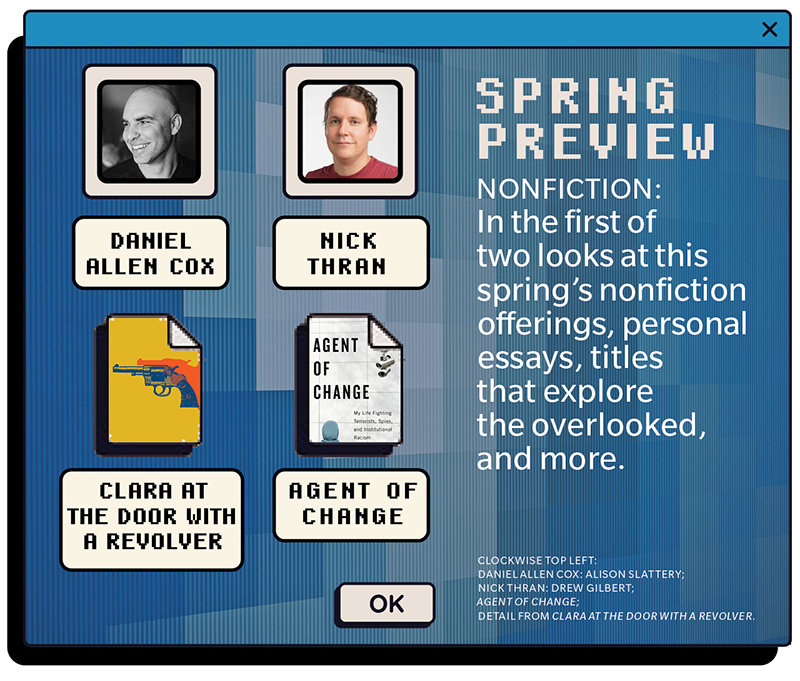 The End of This World: Climate Justice in So-Called Canada
Angele Alook, Emily Eaton, David Gray-Donald, Joël Laforest, Crystal Lameman, and Bronwen Tucker
Between the Lines, Jan.
Based on their work in Indigenous activism, the labour movement, youth climate campaigns, community-engaged scholarship, and independent journalism, the authors critique the current process of transitioning away from fossil fuels in order to provide strategies to help achieve climate justice, Indigenous sovereignty, and a livable, just society. –Attila Berki

Making History: Visual Arts and Blackness in Canada
Julie Crooks, Dominique Fontaine, and Silvia Forni, eds.
On Point Press/UBC Press, Feb.
The poems, artist statements, and portfolios in this collection serve as a reflection of the larger issue of the positioning of Black art within Canadian art and institutions. The book explores alternate ways to approach the relationships between artists, audiences, and institutions. –CD

Clara at the Door with a Revolver: The Scandalous Black Suspect, the Exemplary White Son, and the Murder That Shocked Toronto
Carolyn Whitzman
On Point Press/UBC Press, Feb.
Writer and researcher Carolyn Whitzman tells the story of Clara Ford, a tailor, single mother, and Black woman known for wearing men’s clothes, who was arrested and charged with the murder of Frank Westwood, a member of Toronto’s elite who was shot dead in his doorway in 1894. Ford was the first woman and only the second person to testify on her own behalf in a trial in Canada. Beyond simply piecing together the specifics of Ford’s life and Westwood’s murder, Whitzman exposes the hypocrisy around gender and race in 19th-century Toronto. –CD

Halal Sex: The Intimate Lives of Muslim Women in North America
Sheima Benembarek
Viking, March
Six intimate, personal stories are highlighted by Toronto Life senior editor Sheima Benembarek to openly explore the lives of female and gender-expansive Muslims in North America, and what it means for immigrants and the children of immigrants to pursue an active sex life outside of marriage in a more sexually open society. –AB

Redemption Ground: Essays and Adventures
Lorna Goodison
Véhicule Press, March
In her first essay collection, poet and novelist Lorna Goodison explores the wide-ranging themes of her working life, from her love of poetry and the arts to the legacy of colonialism, from social justice to the power of friendship. –CD 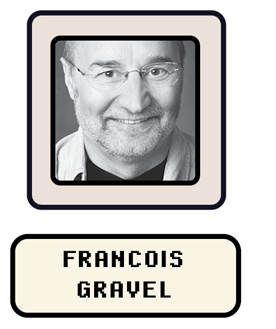 Colonel Parkinson in Charge: A Wry Reflection on My Incurable Illness
François Gravel; Shelley Pomerance, trans.
House of Anansi Press, March
Diagnosed at 65 with Parkinson’s disease, prolific Quebec author François Gravel turned to research, and to writing, to understand the disease that had set up camp in his brain, resulting in a memoir – and a guide to the illness – that is both moving and witty. –AB

Ring of Fire: High-Stakes Mining in a Lowlands Wilderness
Virginia Heffernan
ECW Press, March
In 2007, a mining rush began on the traditional land of the Cree and Ojibway around James Bay. The failure of government and private business to reach consensus with Indigenous communities on development provides a window on the complexity of developing resources in balance with Indigenous rights and environmental stewardship. –AB 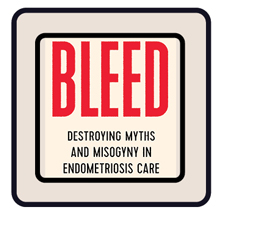 Bleed: Destroying Myths and Misogyny in Endometriosis Care
Tracey Lindeman
ECW Press, March
Part memoir and part journalistic investigation, Bleed is journalist Tracey Lindeman’s interrogation of the medical system that routinely fails those who suffer from endometriosis, a disease that affects one in 10 people who have a uterus, and is routinely misunderstood and improperly treated. –CD 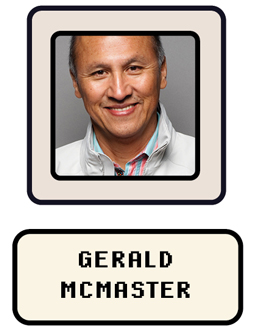 Arctic/Amazon: Networks of Global Indigeneity
Gerald McMaster and Nina Vincent, ed.
Goose Lane Editions, March
This conversation between the Indigenous Peoples of the Far North and the equator includes essays by 12 artists, curators, and knowledge-keepers (as well as more than 100 pieces of art) about traditional knowledge, artistic practice, and geopolitical challenges in two regions of the Americas under environmental threat. – AB 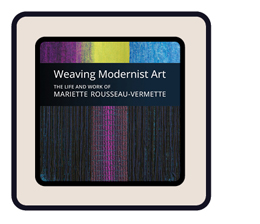 Weaving Modernist Art: The Life and Work of Mariette Rousseau-Vermette
Anne Newlands
Firefly Books, March
French-Canadian artist-weaver Mariette Rousseau-Vermette was a trailblazer of modernist tapestry whose works were exhibited around the world. She received both private and public commissions, including from the Kennedy Center. Yet three years after her death in 2006, there were no books about her life and work. Anne Newlands has rectified that omission with this biography that draws on interviews with Rousseau-Vermette’s family, colleagues, and friends.  –CD

Between Good and Evil: The Stolen Girls of Boko Haram
Mellissa Fung
HarperCollins April
Over four years, journalist and author of Under an Afghan Sky, Mellissa Fung interviewed girls who had escaped the captivity of the Boko Haram terrorists in Nigeria, and their families. She shares their stories of abduction and captivity, escape, and the often difficult circumstances of returning home, as well the brave work of women combatting the terrorists. –AB

Driving in Palestine التحرّك في فلسطين
Rehab Nazzal
Fernwood Publishing, April
All 160 photographs in this collection were shot from moving vehicles, driving the many road systems – each with their own set of laws – of a fragmented Palestine. Interspersed with essays in English and Arabic, Driving in Palestine التحرّك في فلسطين captures this place through the lens of movement, and how movement is shaped by permissions, barriers, restrictions, and surveillance. –Andrew Woodrow-Butcher

Ordinary Notes
Christina Sharpe
Knopf, April
Unfolding in a series of 248 brief notes, academic Christina Sharpe deploys “beauty as a method” in this inventive, multimedia meditation on Black life over many generations. Beginning with memories of her mother and grandmother, the short pieces of Ordinary Notes explore literature, terror, history, language, silence, pain, and art. –AWB

The North Star: Canada and the Civil War Plots Against Lincoln
Julian Sher
Knopf Canada, April
Journalist Julian Sher chronicles the largely unknown history of Canadian involvement in the American Civil War – from individuals who joined the Union cause, to gunrunners, spies, and those who financially supported the Confederacy and even sheltered the accomplices of Lincoln’s assassin in Quebec. –AB

Crack-Up Capitalism: Market Radicals and the Dream of a World Without Democracy
Quinn Slobodian
Henry Holt/RAI, April
Wellesley College professor Quinn Slobodian’s economic and intellectual history issues a warning call regarding a global threat to democracy. He traces the decades-long efforts of radical libertarians to undermine democratic governments and states in order to create an environment of unfettered and dangerous free markets. –AB

The Big Exit: The Surprisingly Urgent Challenge of Handling the Remains of a Billion Boomers
Ian Sutton
Sutherland House, April
In the circle of life, a boom in births will ultimately be followed by a boom in deaths. With cemeteries full and no new ones on the horizon, journalist Ian Sutton looks at what to expect when the death boom hits the baby boomer generation, and how we should best plan to handle their remains. –CD

If It Gets Quiet Later On, I Will Make a Display
Nick Thran
Nightwood Editions, April
New Brunswick poet and bookseller Nick Thran has penned a love letter to bookstores. This collection of essays, stories, and poems is both an ode and an examination of the life of bookstores within their communities. –AB

I Felt the End Before It Came: Memoirs of a Queer Ex-Jehovah’s Witness
Daniel Allen Cox
Penguin, May
Raised in a faith that denied his queerness, it took novelist Daniel Allen Cox 18 years to finally extricate himself from his congregation. This memoir in essays reflects not only on his fraught religious upbringing, but also on the ways in which it frames his adult life. –AWB 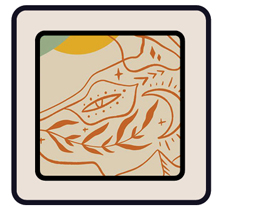 Archives of Joy: Reflections on Animals and the Nature of Being
Jean-François Beauchemin, David Warriner, trans.
Greystone Books, May
In this collection of essays, French-Canadian novelist and poet Jean-François Beauchemin creates a contemplative memoir through accounts of his lifelong encounters with animals both domestic and wild. –AB

Agent of Change: My Life Fighting Terrorists, Spies, and Institutional Racism
Huda Mukbil
McGill-Queen’s University Press, May
Huda Mukbil was the first Black Arab-Canadian Muslim woman to join Canada’s spy agency – a counterterrorism expert in the wake of 9/11 – but found herself within a hostile workplace. This book is a personal account of her experience that also lifts the veil on how racism, misogyny, and Islamophobia in CSIS undermines individuals, institutions, and Canada’s national interests. –AB 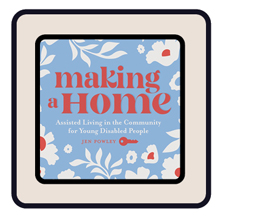 Making a Home: Assisted Living in the Community for Young Disabled People
Jen Powley
Roseway, May
Jen Powley, who lives with multiple sclerosis, tells her story of developing a group home for adults with severe physical disabilities that allows young disabled people like herself to reside outside of the nursing homes they are often relegated to, and shows how lives can be lived with dignity in the community. –AB

I Got a Name: The Murder of Krystal Senyk
Eliza Robertson with Myles Dolphin
Hamish Hamilton, May
Krystal Senyk was 29 when she was shot and killed at her Yukon home in March 1992, not long after she’d helped a close friend leave her abusive marriage. The crime was no mystery: the friend’s ex-husband had threatened Senyk and left town immediately after she was killed. In revisiting the details of Senyk’s life and death, Eliza Robertson and former journalist Myles Dolphin look at the broken system that fails to protect the most vulnerable among us. –CD

Conspirituality: How New Age Conspiracy Theories Became a Public Health Threat
Julian Walker, Matthew Remski, and Derek Beres
Random House Canada, June
Building on their podcast of the same name that exposed wellness gurus for their links to far-right conspiracy trolls, Julian Walker, Matthew Remski, and Derek Beres offer readers a guide to the signs of cult dynamics so they can both recognize wellness grifts for what they are and engage positively with friends and family members who have fallen under the influence of charlatans and pseudo-doctors. –CD

Out to Defend Ourselves: A History of Montreal’s First Haitian Street Gang
Ted Rutland and Maxime Aurélien
Fernwood Publishing, June
The culmination of a four-year project between academic Ted Rutland and Maxime Aurélien, a child of Haitian immigrants and leader of the gang les Bélangers, this is the story of a group of friends coming together in the face of racial violence and policing in Montreal in the 1970s and ’80s. Through stories of the daily lives of les Bélangers, the authors trace the change from petty crimes of subsistence to greater violence and criminality in the face of mounting police actions. Out to Defend Ourselves is a story of young Haitians making a life for themselves in a rapidly changing Montreal. –AWB

Pageboy
Elliot Page
HarperCollins, June
Even as Elliot Page was encountering success with an Oscar nomination for the film Juno, he was struggling with his own identity. Now an important trans advocate, Page tackles gender, love, trauma, mental health, and Hollywood in a memoir about becoming his true self. –AB