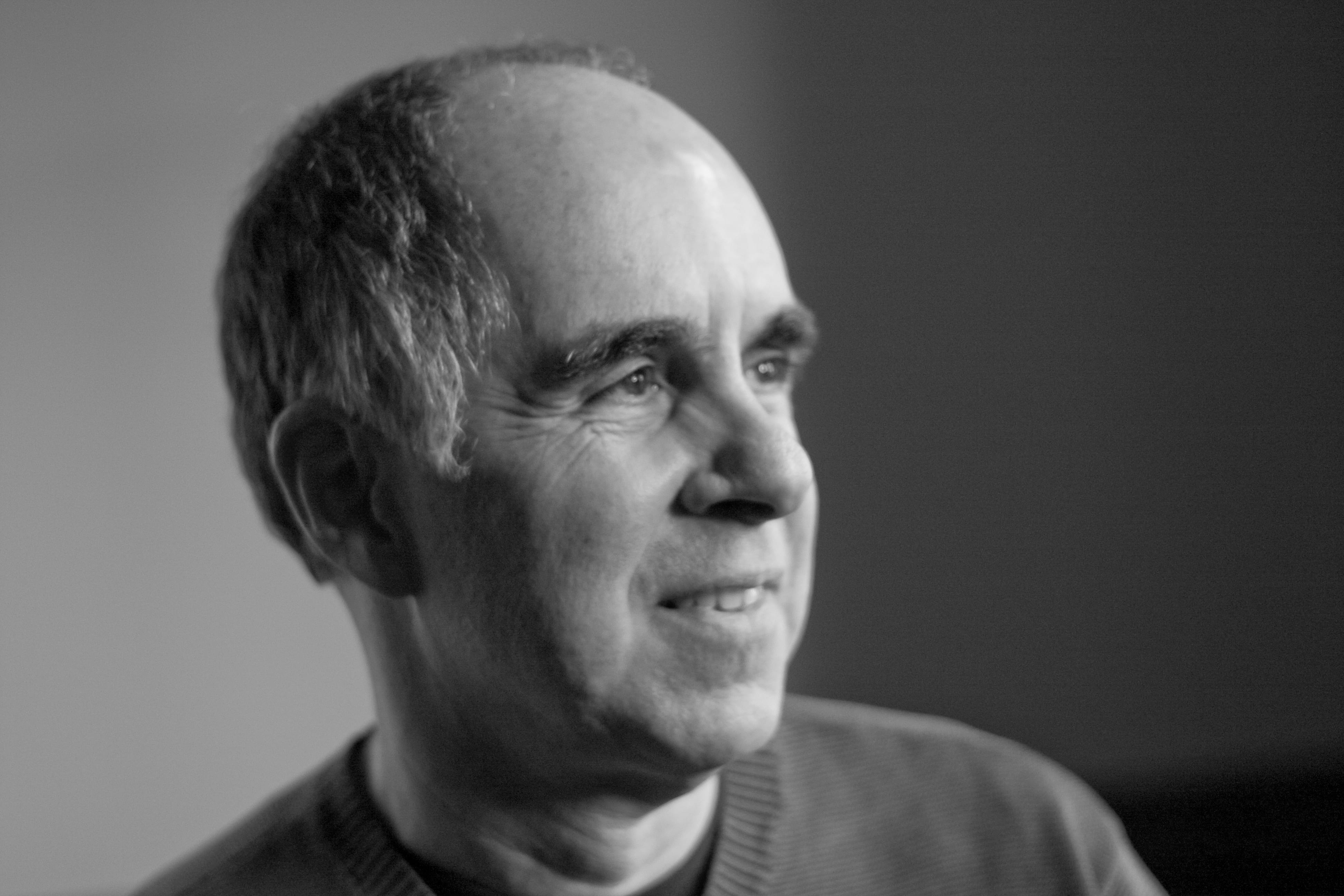 A.F. Moritz is not enamoured with our ersatz condo culture.

The poet and professor is sitting in an apartment in Toronto, looking out the window at a new development going up across the street. “The imagination and the automatic tendency of capitalism and technology do not give us anything except stacks of boxes to live in,” he says, envisioning the various people who will eventually inhabit those spaces going about their daily lives and, if they are lucky, somehow transforming their prefab surroundings into individual, or even creative, environments. “The dominant society takes credit for that but what it deserves for that is shame. It hasn’t got anything to do with what people manage to make out of inhuman circumstances.”

This may seem like a radical stance for someone who just last month was named Toronto’s sixth poet laureate (Toronto being nothing if not a condominium-besotted metropolis). But in fact it is perfectly in line with the philosophy that emerges throughout Moritz’s work, which has always tilted toward the essentially human in opposition to external societal forces that seem insistent on degrading that essence. For his part, Moritz is fully cognizant that his approach to poetry within the context of a postmodern consumerist society is bound to be confrontational. “The attitude that the dominant culture takes toward poetry is 99.9 per cent to ignore it totally and .1 per cent to mock it. But this really, I think, expresses a fear, a wish to put it outside the city gates,” Moritz says. “Somebody who devotes themselves to poetry or gets very interested in poetry is suddenly not going to be spending all of their time making their pile according to the values of the dominant society. Those two things are really, really at war.”

Moritz has joined this war over the course of a lauded career that has won him accolades, a devoted following among poetry readers, and the Griffin Poetry Prize (for the 2008 collection, The Sentinel). And though his poetry has always veered toward concerns that might best be described as metaphysical – he calls himself a hermit and characterizes his own work using words like “mystical” and “inward” – Moritz is more than happy to take a more public-facing approach to his new role as poet laureate. “I’ve always had an interest in the social and, you might even say, political side of poetry,” he says. “I’ve been always open to participating in the more public aspects of poetry. I’ve been increasingly interested in it.”

As he contemplates how to go about his official duties, he expresses a desire to build on the social participation enacted by previous poets laureate, who include George Elliott Clarke, Dionne Brand, and Anne Michaels. For Moritz, this kind of social engagement takes the form of using his new platform to advance and amplify new and previously marginalized voices. He is emphatic that what he wants is not so much to bring “poetry to the people,” a stance he describes as a bit arrogant. Rather, his intention is to go out into communities to discover the poetry that historically has been neglected. Moritz conceives of his role not in any self-aggrandizing sense, instead viewing himself as an emissary embarking into neighbourhoods and urban enclaves where poetry might be circulating and spotlighting it with the intention of introducing overlooked voices to a larger audience. “Going out and discovering, and helping to highlight, poetry that is already there – in identity communities, ethnic communities, religious communities, national background communities, and in local communities in the far-flung parts of the city, places where you don’t expect poetry. Not in the central core where the poets and hipsters tend to congregate.”

To realize this vision, Moritz is working with the city to enact an irregular series of public readings in various venues, an initiative he is calling “The Poet Laureate Presents.” The first of these happened on April 24, at The Poet Condominiums sales centre in the east-end Leslieville neighbourhood – a location that testifies to Moritz’s practical willingness to exploit for his own ends the capitalist machine he derides and to bring poetry into spaces that might appear counterintuitive or even openly adversarial. That event, which was held in conjunction with the non-profit organization East End Arts, featured readings by Toronto poets mercedes killeen, Peter Norman, and Lily Wang. As this series progresses, Moritz wants to make good on his notion of bringing poetry to every corner of the city – he mentions Scarborough, Markham, and Pearson International Airport – as kind of a reclamation of urban space for poetry. 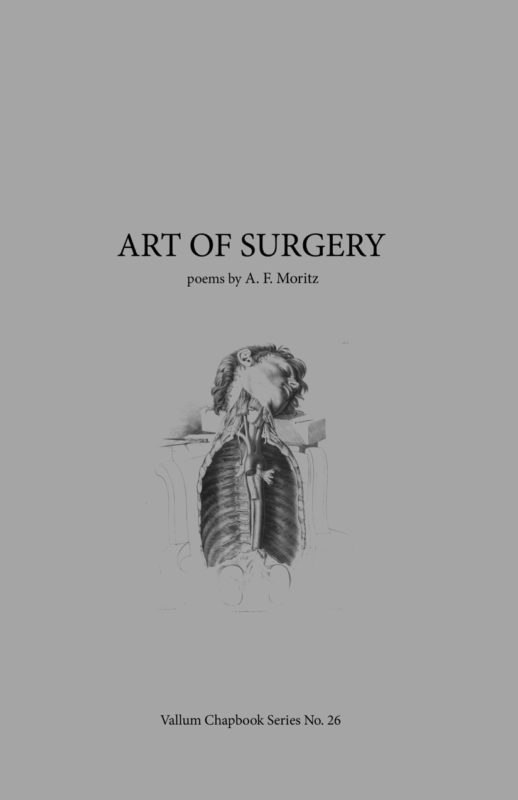 In the meantime, Moritz is set to launch his own latest work: a chapbook called Art of Surgery, published in a limited edition as part of Vallum’s chapbook series. The book launches on April 26 at the Tranzac Club in Toronto’s Annex neighbourhood. The poems in the chapbook deal with subjects of grief and mortality; they are typically introspective and spiritual, but in this instance the material had a very personal genesis.

Art of Surgery, which comprises one section of an unpublished collection called As Far as You Know, arose in part from heart surgery Moritz underwent in 2014 to deal with a congenital condition called aortic stenosis. His experience in hospital began a period of rumination on the confluence of technology and human intervention in medicine, something Moritz writes about in an essay that was considered as an introduction to the chapbook, but in the end left out. “If poetry as Wordsworth teaches is an action of creative response, of activity springing from passivity, action springing and serving and openness and returning to it, then for me this experience in hospital was poetry and the germ of poetry,” Moritz writes. “It was like a fresh revelation of my permanent sense of the heroism of people struggling simply to be people, fully, within the situations given to them, situations that often are so needlessly tyrannical and restrictive and impoverishing but which still have to be used and have to be praised, because they let us live, they are our life, and life is good, we want to live.”

The struggle to be human under inhuman conditions may finally be considered Moritz’s great subject and gives insight into what draws him to poetry in the first place. “Poetry is the least manufactured of the arts,” Moritz says, riffing off a comment by Hannah Arendt. “It’s the one that is closest to the thought that produces it.”

Because poetry speaks to what is essentially human in us, Moritz avers, all serious poetry is – in the context of a technological and consumerist society ruled by the dehumanizing logic of consumption – revolutionary. Though, as always with Moritz, the particular contours that revolution adopts are more nuanced than they might at first appear. “Often, a poem about the misery of a child that has lost its mother to a disease is going to be more revolutionary than a propagandistic poem protesting consumerism. You don’t have to have a political content to be existing in a completely other and better world of human endeavour and demonstrating something that is free, something that fully feels both the glory and the tragedy of being human.”

Correction, May 5, 2019: An earlier version of this post misstated the Vallum Chapbook Series as “Vellum.” Q&Q regrets the error.