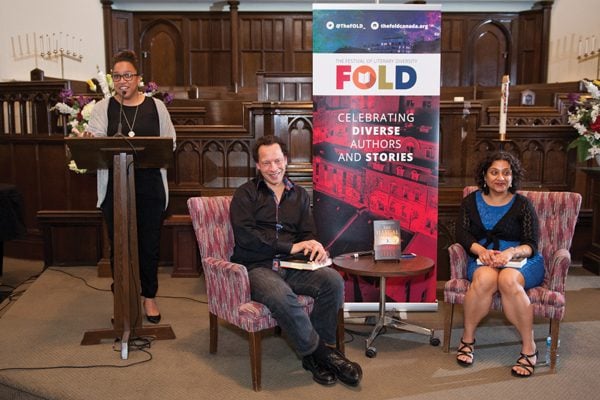 The year-round sponsorship represents a three-year commitment from the Amazon-owned audiobook service, which announced its sponsorship of the Scotiabank Giller Prize and the launch of its Canadian e-store in September 2017. “This commitment from Audible Canada is a game changer,” FOLD artistic director Jael Richardson said in a statement, noting its support will provide “critical stability” for the festival.

“FOLD celebrates diverse voices and Audible is proud to bring those voices to listeners across Canada,” Jon Fleming, manager of Audible Canada, said in a statement. Books by FOLD alumni such as Eden Robinson, Kim Thúy, and Lawrence Hill are currently available on Audible with Canadian actors of diverse backgrounds frequently employed as narrators.

Audible’s sponsorship will allow FOLD to create a full-time staff position and to continue running and promoting its annual Reading Challenge, which encourages readers to discover authors who represent marginalized perspectives including a diversity of cultures, abilities, sexual orientations, and religions.

Amanda Leduc, communications and development coordinator for FOLD, notes Audible’s support is a natural partnership for a festival that strives for accessibility, providing another format in which people can experience books. Improvements to accessibility will begin at this year’s festival, which takes place in Brampton from May 3–6. Audible will be onsite to record live panels, with recordings made available to the public. More details of the sponsorship will be made available at a later date.

Information about the 2018 festival – including a complete schedule of panels and speakers – is available at TheFOLDCanada.org.