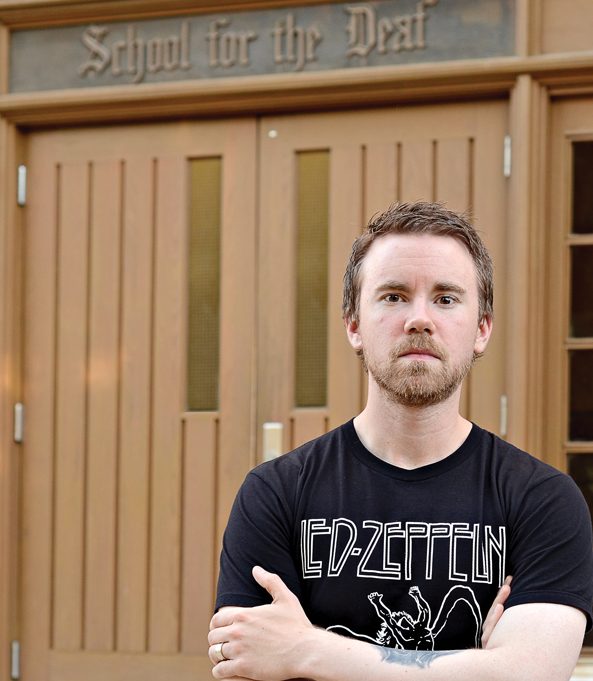 When Saskatoon author Adam Pottle appears at literary festivals and events across the country, he occasionally has a tough time understanding his fellow panelists. Pottle was born partially deaf in both ears – a condition that has informed all his writing, from poetry to novels to last year’s theatre production, Ultrasound. It also means that he cannot always easily engage with other authors or audience members in live appearances.

“I didn’t have accessibility measures, but I didn’t ask,” says Pottle. “Only in the past year or so have I realized that I had a right to ask, because before, I felt that if I was doing that, I would be imposing.”

So when Word on the Street Saskatoon invited him to appear at this year’s festival, in September, Pottle asked for real-time speech-to-text captioning and an American Sign Language interpreter for the audience. When WOTS’s board of directors determined they couldn’t afford the services, Pottle offered to waive his author’s fee, but after that request was turned down, he found himself off the lineup. Frustrated, he turned to Twitter, where he found support. “A number of people started getting into the conversation, and we realized just how much of an issue this is. Not just here, in Saskatchewan, but across Canada,” Pottle says.

Soon after, WOTS reversed its decision, and Pottle was back on the roster, with the requested accessibility measures in place. But the situation brought to light, from Pottle’s perspective, “just how deeply embedded privilege is in Canada, and how important it is that we need to challenge those privileges.”

Sarah Simison, executive director of the Saskatchewan Festival of Words, was one of the first to reach out to Pottle, offering him a spot at next year’s event. “Adam was already on our radar, and I thought, ‘Well, here is an opportunity to make it right for this person,’” she says. “I am familiar with his work, and I know he’s a quality author that we want to come to our festival. I sent the invitation knowing I have no idea where to start with ASL and captioning, but I’ll figure it out. It’s my job to figure it out.”

It’s Simison’s goal for the festival to provide ASL and captioning for all its events, regardless of whether there is a deaf author in attendance. But as a festival director working on a tight budget, Simison knows all too well the financial constraints faced by non-profit organizations. When a new cost comes up, it means funds will have to either be cut from elsewhere, or other grants or sponsorships need to be pursued. She hopes that the major funding agencies — in particular those that stress accessibility as part of their own mandates — will recognize the added costs and offer more financial support in the way of either operational or special project grants.

Financial support for accessibility services and programs differ across the country, from province to province and city to city. The Yukon provincial government has an accredited interpreter on staff for community and cultural events – a service that publishers such as B.C.’s Harbour Publishing have used in the past, but many events that offer on-demand ASL services, such as the Vancouver Writers Fest, the International Festival of Authors, and the Surrey International Writers’ Conference, do not receive government support. Pottle’s situation led WOTS Saskatoon to discover that the city provides money to offset the costs of accessibility measures for public events. “I didn’t know that existed. But now that I do, and now that Word on the Street does, we can make sure it’s a part of the festival going forward,” says Pottle.

When Jael Richardson, executive director of the Festival of Literary Diversity, decided to launch a new series of workshops for unpublished marginalized writers this fall, she took it as an opportunity to reach out to the deaf community by offering ASL interpreters and closed captioning. In the future, she hopes to add real-time speech-to-text captioning to both the workshops and the festival to accommodate those who are hard of hearing and don’t know ASL, although an early trial of the technology proved its inaccuracies, particularly in a session involving Indigenous languages. Ideally, says Richardson, all FOLD events would be accompanied by screens running text from a person who can accurately type the transcripts in real time, similar to a court stenographer. Although FOLD hasn’t been successful in receiving grant money for such services to date, Richardson continues to investigate and apply for aid to cover the expenditure, as she sees the inclusion of deaf authors – and audiences – as key to a healthier, more diverse publishing industry.

“It’s a big problem in raising up and growing up a mature, deeper, more abundant disabled community of writers. I think there’s a sense of shame in identifying that way,” says Richardson. “Also, you never even want to talk about the finances in front of an author because you don’t want them to feel like this burden is theirs, their cost.”