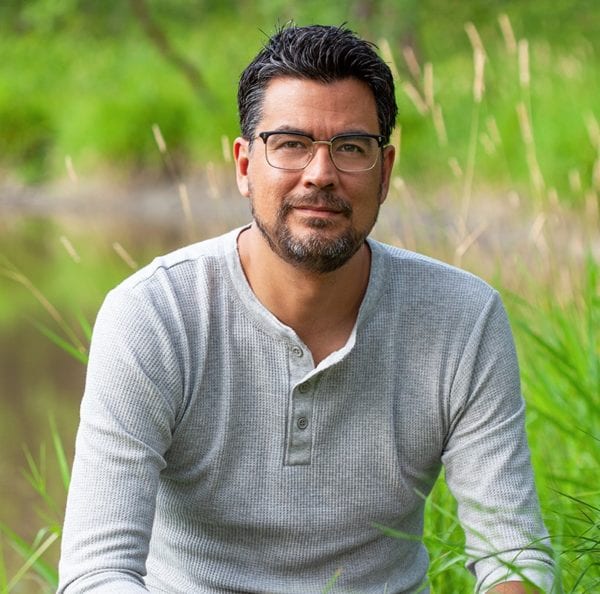 It’s not unusual to spot David A. Robertson’s name on the bestsellers charts.

The prolific author and two-time Governor General’s Award winner has had multiple bestselling titles over the past year, including The Barren Grounds (Tundra Books, 2020), the first book in his middle-grade Misewa Saga trilogy. Follow-up title The Great Bear joined it on the list when it was released in September 2021.

Robertson spoke to Q&Q about the unexpected success of The Barren Grounds and the strangeness of being a bestselling author.

How does it feel to be a reliable bestseller presence?

I don’t know if I ever really think of it that way. For the goals that I have for my literature – to reach as many people as possible, because I have things to say in my books that I think will move us forward to reconciliation or educate kids about important issues – the more people that are reading them, the better. I think the goals I have are somewhat being accomplished because of what I’m seeing on the bestsellers list. It’s gratifying in that way.

You’ve just won a second Governor General’s Award with illustrator Julie Flett, this time for On the Trapline. How important is the award attention?

You don’t really ever expect to get any awards attention. It’s nice to be nominated, and then to win is another level of, like, holy crap. On the Trapline (Tundra Books, 2021) is such a special book to me. It’s about my dad, and he passed away just before it came out. Getting a GG nomination for it was probably the most I’ve appreciated an award nomination because of how much the book means to me. I think my dad would have been really happy.

Why do you think When We Were Alone keeps appearing on the bestsellers list years after it was first published?

One of the things I’ve said lately is that it’s not really my book anymore. It’s a book that belongs to survivors and families and communities. It has taken on a life of its own, and I think you’ll see it pop onto the bestsellers list from time to time because people need to know. Books are a good way for people to learn, and there still aren’t a lot of books to teach really young learners about residential schools. I think When We Were Alone (HighWater Press, 2016) will always be a book that people go to to support their learning when they want to teach young kids a history that’s really difficult to teach.

Is there anything you’d like to add about your continued bestseller status?

I just don’t know, sometimes, what to think about it. There are so many amazing books that are published in a year; it is a real privilege to see your book on this list when you know there are so many other amazing books that aren’t. With The Barren Grounds, I think people are just  connecting with it in some really strong way. It’s really cool, but it’s also weird. It’s been on there for over a year straight, and I never would have expected that. It’s so surreal.

Nov. 28 – Dec. 4 Data based on reports from 230 independent Canadian bookstores, as collected by Bookmanager

4. It Fell from the Sky, Terry Fan and Eric Fan (Simon & Schuster)

5. On the Trapline, David A. Robertson, Julie Flett (Tundra Books/PRHC)