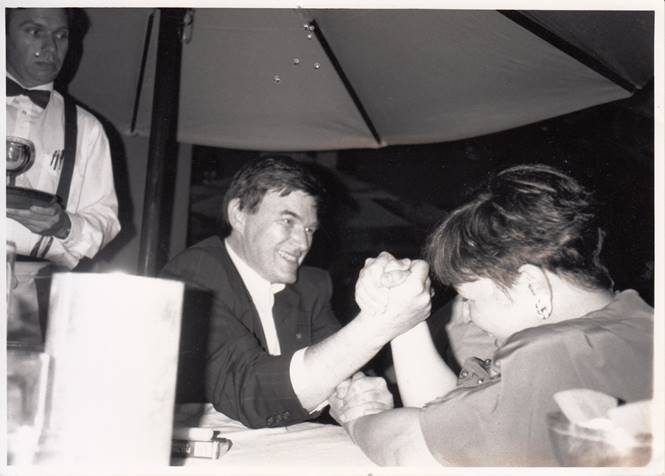 Bill Hushion, the legendary Canadian publishing sales and marketing executive, once staked a promise of a discount on an arm wrestle. Donna Brendon, formerly a bookstore coordinator for the West Coast chain Save-On-Foods, found herself at an American Booksellers Association conference dinner with Avie Bennett, then publisher of McClelland & Stewart, and Hushion, his vice-president of sales and marketing. “I think it was 1987 or ’88,” Brendon says. “[It was] a really high-end restaurant.”

Loblaws grocery chain had partnered with M&S on a book that Brendon wanted for her stores. Problem being, the deal with Loblaws stipulated the book was not to be sold at a discount; Save-On-Foods’s entire sales strategy was based on providing books to consumers at 15 per cent off the regular price. “Bill, being the impish guy he is, threw it out in the middle of the table. In front of his boss, he said, ‘You can’t discount that book.’”

Not one to be cowed, Brendon suggested they arm wrestle for it.

“Here we are in this fabulous restaurant, this dusty guy from England is in between us,” Brendon says. “Bill just kind of whispered to me, ‘It’s going to be a draw, right?’” And it was – but Brendon got her discount.

The anecdote illustrates the kind of man people remember Hushion as being: insouciant, sardonic, caustic, and good natured, but surpassingly tough when it came to his job. Hushion died on April 8, a little more than one week shy of his 80th birthday.

“Bill was the heart and soul of the Canadian publishing industry,” says John Neale, former chairman at Random House of Canada. “He treated it as his family and was very supportive of all who were a part of it.”

“He knew everyone in the business of sales and marketing in books, and a few on the editorial side,” says Linda McKnight, an agent with Westwood Creative Artists. “Lunch with Hushion was great fun and very useful for a sense of what was happening in the trade.”

It is perhaps unsurprising to hear that Hushion was so well connected, given his broad industry experiences, which included stints at Gage (under renowned publisher Ron Besse), Methuen, Nelson, and M&S, before charting his own path with the distribution outfit Hushion House Publishing. Launched in 1996, Hushion House was a victim of the General Distribution Services bankruptcy in 2002; at the time, Hushion was owed $587,000 (GDS handled warehousing and fulfillment for Hushion House). Hushion cited the GDS collapse as a contributing factor to Hushion House’s own bankruptcy in 2006. Following the demise of his eponymous distributor, Hushion got involved with Promotional Book Company selling remainders, something he continued to do until as recently as four weeks ago.

“Bill believed in books, and Bill always said you sell with samples,” says Michael Reynolds, a former B.C. and Alberta sales rep who worked under Hushion at Gage and Methuen. “Here’s a guy in his mid to late 70s who’s showing up at Book City and BMV in Toronto and [he’d] pull up to the back door and open the trunk and there would be boxes and boxes of book samples.” In his later years, Hushion walked with a shuffle, so he had younger employees at the stores cart the boxes inside where he would take orders. “Then he’d go back to Promotional and write the order up and they’d pick it and pack it and throw it back into his Ford Focus and he’d drive them over and drop them off.”

Remembered as much for his salty irreverence and tough negotiating style as his ebullient good humour, Hushion was ravenously devoted to the sales and marketing of books in Canada, an aspect of the publishing industry that often flies under the radar of public perception. “So many people talk about the Canadian book business from the point of view of publishers, editors, and authors, but Bill was primarily interested in sales,” says Ben McNally, owner of Toronto’s Ben McNally Books. “His main interest was selling the damn books.”

Ian Elliot, proprietor of the Burlington, Ontario, bookstore A Different Drummer, agrees. “To put it kind of crudely, he enjoyed the hustle,” Elliot says. “He still had great energy, right up until the last time I saw him. He loved books and, from what I could see, he loved booksellers, too.”

Another category of people Hushion paid close attention to was librarians. Once he began selling remainders, he had the insight to pitch to libraries, which would often jump at the chance to acquire stock for their shelves at a relatively cheap price. “The libraries were an important market and you should always be calling on the big-city library,” Reynolds says of Hushion’s philosophy. “What does a librarian do when they want to open a new branch? They need books to fill it and where’s a great place to find them? Promotional Book Company, where they can get an awful lot out of $100.”

Hushion’s other great insight, according to Christopher Keen – who worked at Britnell’s Book Shop in Toronto in the 1970s, and was later hired on as director of sales and marketing at M&S – was the idea that a Canadian publishing house needed British and American titles to underwrite their domestic publishing programs. “Bill actively sought out distribution agreements with American and British publishers – Macmillan and Gollancz in the U.K. and St. Martin’s Press and Dutton in the U.S. were the largest,” Keen says. “These paid off for M&S. The relationship with Macmillan allowed M&S to publish profitable Canadian editions of several of Minette Walters’s mysteries and Wilbur Smith’s adventure novels, for example.”

“He knew what to publish and import; how and where to place the books in the marketplace; and how to maintain those relationships that allowed you to do that season after season,” says Neal, who also testifies to Hushion’s grandiosity. “One of his nicknames was ‘Boxcar Bill,’ referring to some rather large print runs and agency orders.”

In person, Hushion was a plainspoken straight shooter who peppered his speech with salty language and maintained what Keen calls “a finely tuned bullshit meter.” He would call out what he perceived to be shoddy business projects, which he labelled “turkeys.” Though he had a strong sense of what worked from a sales and marketing perspective, he was not immune to the occasional turkey of his own. “He had the idea to re-jacket M&S overstocks in yellow and black, like a ‘No Frills’ product, and sell them at drastically reduced prices in Loblaws,” Keen says. “Not one of his better marketing ideas, as I recall.”

The occasional misfire notwithstanding, Hushion is remembered by all who knew him as someone who was aggressive in his sales endeavours and fiercely loyal to those who worked with and for him. “The one thing I really appreciated about him was that he always had your back,” says Reynolds. “Here’s a guy who really felt for his people and engendered that feeling of loyalty.”

Former M&S publisher Douglas Gibson recalls Hushion as a “charming troublemaker” with a vast experience and an unorthodox approach to Canadian publishing and sales. And he is remembered fondly as a gentleman from an era of publishing that no longer exists in quite the same way. “Bill was perhaps the last of the ‘old school’ book reps,” says Keen. “He knew what his customers would buy, and how many copies, before they did. His customers were his friends, not just numbers on a spreadsheet.”

“He was the one who really taught me that this is an industry in which everyone depends on everyone else,” says McNally. “His death is a reminder of how much fun the book business used to be.”

To illustrate the nature of Hushion’s affection for the people he worked with in the industry, Brendon recalls a letter he sent her in 1991 after she was involved in a serious car accident. “If it had to happen – I’m glad it wasn’t a broken arm – otherwise our coast to coast tournament couldn’t carry on,” Hushion wrote. “That was one of the nicest things I received,” Brendon says.