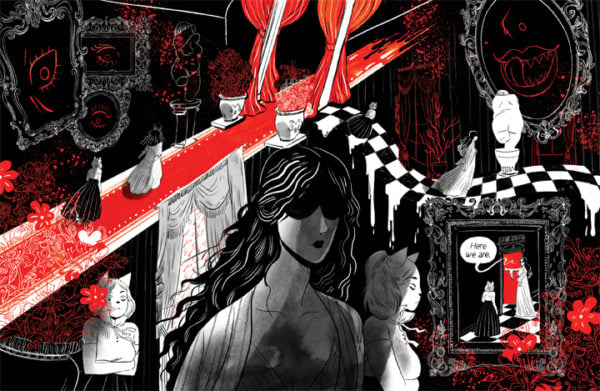 Emily Carroll’s body of work has enthralled all kinds of readers: horror fans, comic artists, and adolescents with a penchant for the creepy. She made her name with the 2010 horror webcomic His Face All Red and with her illustrations in two graphic novels aimed at younger readers: Marika McCoola’s Baba Yaga’s Assistant (Candlewick Press) and the adaptation of Laurie Halse Anderson’s Speak (Farrar, Straus and Giroux).

Carroll, who lives in Stratford, Ontario, won an Eisner Award in 2015 for her debut graphic novel, Through the Woods (Simon & Schuster), which saw the artist delving deeper into psychological horror. With her new graphic novel, When I Arrived at the Castle – her first with Toronto’s Koyama Press – Carroll steps into sexier terrain with a unique take on the gothic vampire tale.

What is When I Arrived at the Castle about?
On its surface, the book is about a would-be vampire hunter infiltrating the castle of a vampire, only to become lost and beguiled in her serpentine lair. What it’s really about is my own creative process and a rough period of burnout I was going through at the time the book was written. It was drawn intuitively, without knowing exactly what it was or where it was going, plot-wise. I drew each page of this book entirely on its own, without knowing what the next one would be.

Ultimately, the book is about feeling lost and wrestling with demons both internal and external – about finding yourself in a place where you didn’t think you would ever end up, and desperately needing to escape.

What distinguishes this book from some of your other horror work?
This book is a lot “weirder” than some of my other stories – a lot more abstract, artistically and narratively. I always play with a little bit of dreaminess in all my work, but in this one I really went full force.

This work feels much more sexual than your other books. Was that something you’d planned from the outset?
When I sat down to draw this book, the only goal I had was to start drawing things that gave me pleasure – and it just so happens that what I find most satisfying to draw is gore, blood spatters, baroque detail work, and women in various states of undress giving each other heavy-lidded looks.

That said, at the back of my mind was the idea that, even though I’m gay myself and adore romance and sexual elements in the storytelling I consume, I have never explored it much in my own work. Part of it is that I’ve been shy, or at least a little insecure, in sharing that sort of vulnerability on the page.

The story-within-a-story trope often appears in your work. What does the concept mean to you in the context of horror writing?
Part of it is that narrative appeal of never being able to quite trust reality, whether it is coming from the narrator of a story or the hand of the artist who is drawing it. In horror, it’s important to me that the reader never quite feels on steady ground.

In this book, the story-within-a-story elements relate to my mindset at the time, which was very troubled by depression and substance abuse. Reality and the blurring thereof was a daily struggle. Looking back at those sequences now, in a healthier place, I can see that I was struggling with feeling untethered in more ways than one.

Your work has increasingly featured animals with human forms. What do the animal characters signify to you?
Growing up I always drew animal people, for the simple reason that drawing actual people is a lot more difficult. And that remains true to this day.

When I began drawing this book, I chose the cat-like face for the narrator simply because I couldn’t decide on a style for an otherwise human character. I wanted something simple and pleasing to draw and look at, and ended up with what I think is probably one of my most iconic leading characters.

This seems like a really interesting moment for contemporary horror writing. How do you feel about the work that’s coming out?
I’m always excited about horror. I love all sorts of different work within the genre, from the schlocky to the sublime. Right now I’m reading an advance copy of Paul Tremblay’s new story collection, Growing Things, and I love the way he plays with ambiguity.

I also recently began reading Carmen Maria Machado’s story collection Her Body and Other Parties because all my queer horror friends were recommending it. Seeing other queer women putting out horror work really inspires me to do more of the same. I’m hoping with When I Arrived at the Castle, I’m contributing to that wave of inspiration.

This interview has been edited for length.