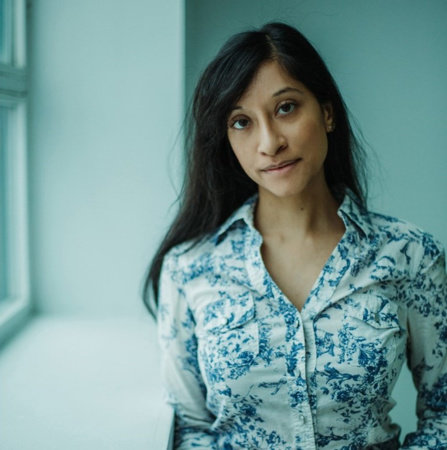 Toronto poet Doyali Islam’s second collection, heft, is among three Canadian titles in the running for the 2020 Griffin Poetry Prize. Islam’s publisher, McClelland & Stewart, and its poetry editor, Dionne Brand, were responsible for two-thirds of this year’s Canadian shortlist: also nominated is Montreal poet Kaie Kellough for his third collection, Magnetic Equator. The final Canadian nominee is Vancouver’s Chantal Gibson, who was nominated for her collection, How She Read (Caitlin Press).

Scott Griffin announced the shortlist in a press release this morning. The titles were selected by a jury consisting of Irish poet Paula Meehan, Jamaican/U.K. poet Kei Miller, and Canadian poet Hoa Nguyen.

Of Islam’s book, the jury wrote, “What is beautiful and successful here is the way Doyali Islam takes small moments and gives to them an incredible, sometimes aching, heft: the ephemera left in a pocket become a map leading us back to love; an ant observed on the floor finds its way onto a white page – a black mark effectively writing its own poem, ‘struggling to interpret its situation.’”

The jury praised Kellough’s work for “[t]aking on influence, place, and racialized diasporic experience as it draws language into geographic drifts and historic collisions” in a text that “negotiates survival and revolt as it moves with the surety and complexity of improvisation and collaboration.”

And Gibson’s book, the jury wrote, “invites scrutiny of where language maps, or fails to map, the quiddity of the world.” Gibson’s “interanimation of the visual and the verbal energizes a private mark-making, a resistance poetry to the coded, at times subliminal, oppressions of history.”

The three-member jury also selected a quartet of international works for a separate shortlist. Those nominees include Pulitzer Prize–winning U.S. poet Sharon Olds, shortlisted for her latest collection, Arias. The other international nominees are Abigail Chabitnoy for How to Dress a Fish; Sarah Riggs for Time, translated by Etel Adnan; and Natalie Scenters-Zapico for Lima::Limón.

In total, the jury read 572 books (of which 37 were translations) hailing from 14 different countries. The Canadian and international winners will each receive a cash prize of $65,000. Each of the other finalists in both categories will receive $10,000.

Due to the current restrictions surrounding COVID-19, the Griffin Trust for Excellence in Poetry, which administers the prize, has announced that this year’s public readings and gala award dinner have been cancelled. The winners of each of the two prizes will be announced online, via the Griffin Poetry Prize’s online channels (the Griffin website, along with its Facebook, Twitter, and Instagram accounts) on May 19.