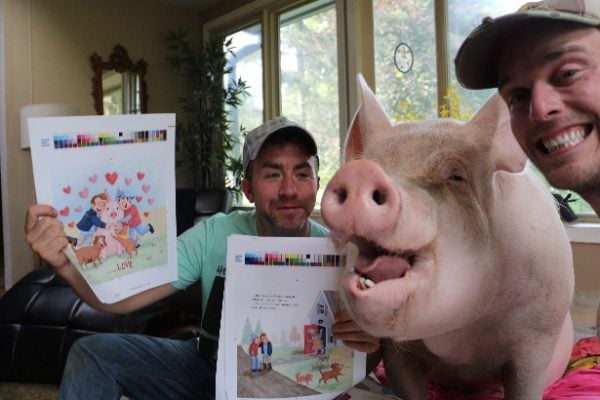 Just four years ago Steve Jenkins was a real estate agent and his partner Derek Walter was a professional magician. But their lives were turned upside down after they adopted what they thought was a mini pig named Esther. Their cute pet grew into 650-lb commercial pig, which was living in their small city apartment. Their newfound love for Esther led them to stop eating meat, start a wildly popular social media account for their pig, and move to Campbellville, Ont. – where they opened the Happily Esther After animal farm sanctuary. Next came the New York Times non-fiction bestseller Esther the Wonder Pig, a funny and touching memoir of their experiences with Esther. On March 6, they’ll release a picture book, The True Adventures of Esther the Wonder Pig (Little, Brown Books for Young Readers), which also tells the story of how they fell in love with Esther, how she became part of their family, and the mischief she got into as a baby for a younger audience. Jenkins and Walter hope it’ll be the start of a long-running children’s series.

QQ: How did it feel when you first saw the finished children’s book?
SJ: The illustrator [Cori Doerrfeld] went through social media pictures and paid so much attention to details, she got the barn and the house right, Esther’s smile, my hat. She nailed all the characters.
DW: It feels like a fairy tale that’s come true.

QQ: How did Esther’s story become the subject of two books?
SJ: That’s been one of the strange things about all of this. When a publisher first contacted us we were expecting them to ask us for a children’s book. That’s what the story lends itself to, this big pig living in the house, a Clifford the Big Red Dog kind of thing. When they asked about non-fiction it took us both back, that someone wanted to hear our story – and to have to put that into 50,000 or 60,000 words was a mind-boggling idea. You think of essays in high school and college and to actually have to write a book was horrifying.

QQ: Both the nonfiction and children’s book were done with the same co-author, Caprice Crane (a screenwriter and novelist, who happens to be the daughter of Ginger from Gilligan’s Island). How has she helped tell the story?
SJ: We met Caprice as an Esther fan originally, and then she got us in touch with her agent. At one point, Caprice was helping us interview authors, and we kept hitting walls. One day I said, “Caprice, why am I interviewing all these authors? You’re a writer, would you consider doing it?” But it was out of her genre, she’s not a ghostwriter. And here we are three books later. [The co-authors are also working on a follow-up to the non-fiction title, which will detail how Esther and her two dads adjusted to life on the farm.] With the first book, Clarice did a lot of the writing, but we learned enough that for this second non-fiction we did a lot more of the writing.

QQ: Basically your life makes excellent material for children’s books – you could probably write one a day.
DW: Everyday’s a holiday. Every experience we just sit back and say we can’t believe this is our life.
SJ: Right now, I’ve got a turkey sitting in front of me, wandering around and requesting attention. You never know what’s going to happen when you get up in the morning.
DW: Our best friends are non-human animals. 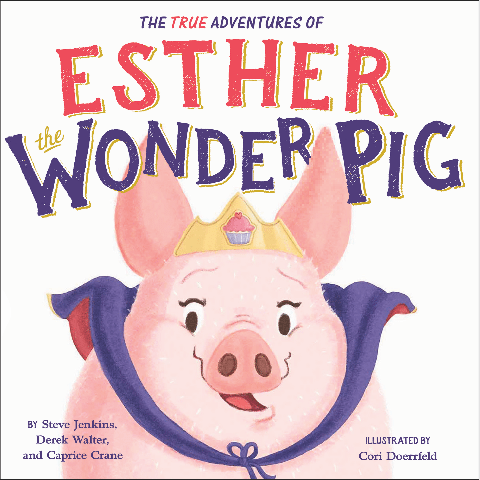 QQ: What excites you about the children’s book series?
SJ: It’s a chance to put a story out there for kids about our family – which is, in general, a picture of how it’s okay to be different. Compassion and kindness is such an important thing for kids to learn and we have a really unique way to teach it to them and show it to them.

QQ: How will you approach the messaging, be it about gay rights and/or veganism?
SJ: We have to be very cognizant and careful about the messages. These are kids books, they need to be fun, adventurous, and relatable.
DW: While teaching the adults.
SJ: Yes, we’re kind of hoping to be the Pixar of kids books. What we’re hoping is that the adults really get the underlying messages while the kids, at first glance, just see the story and just have fun with it and fall in love with Esther as a character.

QQ: What will happen in the other True Adventures of Esther books?
We are just trying to work that out, it’s very early stages. But there’s so many possibilities: the first time Esther meets another pig; Esther goes to the hospital; Esther goes to the ocean; Esther goes to the grocery store. Also her best friend really is Cornelius the Turkey, and I know publishers want to get Cornelius involved in the books somehow. Cornelius really needs a book agent.

QQ: It’s hard to imagine what you’ve had to learn to do in just a few years, from how to take care of a pig, to how run a popular social media site, not to mention how to operate a farm.
DW: [Laughing] You can’t make this shit up.
SJ: It’s been incredible and terrifying and amazing all at the same time. It’s hard to explain how quickly and drastically our opinions and lifestyles and even careers changed all within a couple of years. It just happened and continued to grow. We’ve been in high gear for four years, we do as much as we can, the best we can to get the message out there the right way. We know it’s a touchy subject, but the underlying message of the Esther the Wonder Pig [books and social media] is to stop eating animals. It’s a very challenging and tricky message to get across in a relatable way to the people we want to get it across to. We’re not a vegan page for vegans, we’re a vegan page for people like us before we met Esther. All it took for us was to see her that little bit differently. To move her from that category of they’re born and bred for that to she’s no different than my dog or my cat so why do I think of her so differently? It’s amazing to see how quickly people respond and get it.