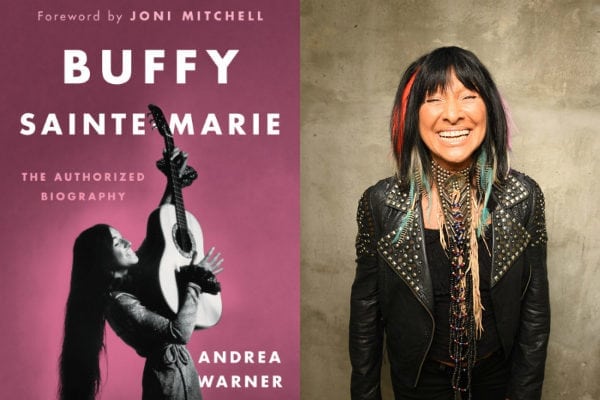 For Andrea Warner’s upcoming Buffy Sainte-Marie: The Authorized Biography, she booked the perfect opening act: Joni Mitchell. The 74-year-old, who, like Sainte-Marie, hails from Saskatchewan, has largely retreated from public life, especially in the wake of a 2015 brain aneurysm. Warner had tried­ – and failed – to book Mitchell for an interview for the book.

However, when Warner’s editor Jennifer Croll approached Mitchell’s manager about writing a foreword for the book, she was surprised at how quickly she confirmed Mitchell’s interest. Croll was connected with Mitchell’s medical conservator and friend.

“Three months after I first wrote to Joni’s manager, I opened my email to find an approved foreword from Joni,” Croll says. “It was well worth the wait – we were so happy. It’s a testament to how much Joni wanted to help Buffy that this happened at all; I really think it was a gift from her.”

In the brief foreword, Mitchell recalls her early enchantment with Sainte-Marie’s music and, later, how the singer championed her own music when record executives couldn’t have cared less. “I’ve watched Buffy’s long career with admiration, and I’m honoured to write this foreword to her authorized biography,” she writes in conclusion. “Buffy Sainte-Marie is one of folk music’s unsung heroes, and her inspirational life is a story that deserves to be read.”

Buffy Sainte-Marie: The Authorized Biography will be published Sept. 25.