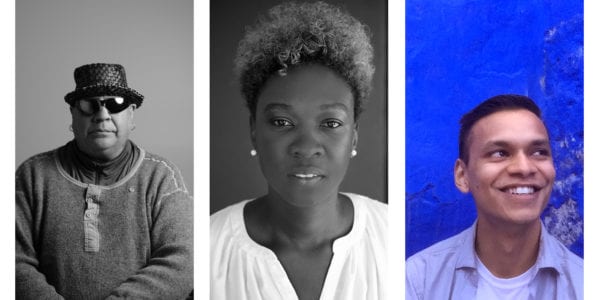 Poets Joseph Dandurand, Canisia Lubrin, and Yusuf Saadi have been shortlisted for the $65,000 Canadian Griffin Poetry Prize. The Griffin is the largest prize for English-language poetry in the world.

The shortlists for the Canadian and international prizes were announced Wednesday. The winner in each category will be awarded $65,000, while finalists will receive $10,000. The winners will be announced on June 23.

Dandurand was nominated for The East Side of It All (Nightwood Editions), his fourth poetry collection. In their citation, the judges wrote that his portrayals of the prostitutes, heroin addicts, alcoholics, and abused of Vancouver’s Downtown Eastside “are deeply moving spiritual invocations, extricated from poisoned air by a fallen angel.”

Lubrin was nominated for her second poetry collection, The Dyzgraphxst (McClelland & Stewart). The judges described the book as “Lubrin’s spectacular feat of architecture called a poem.”

Saadi was nominated for his debut collection, Pluviophile (Nightwood Editions). The judges described the poems as “search[ing] everywhere for mystery, for magic, for beauty” and called the book “a beautiful, refreshing debut.”