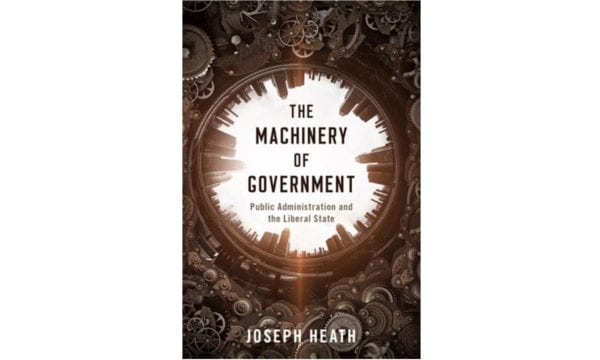 Joseph Heath is the winner of the 2020 Donner Prize for his book, The Machinery of Government: Public Administration and the Liberal State (Oxford University Press). The $50,000 prize celebrates Canadian public policy writing.

In a virtual event hosted by Global News anchor Farah Nasser on May 19, Heath said winning the prize was “an enormous honour.”

Heath praised the Donner Prize for the work it does to highlight books that “would have otherwise been overlooked,” and said that unlike the book for which he was shortlisted for the 2014-2015 Donner Prize, The Machinery of Government fits that description.

Heath was one of five finalists for the prize. The other four finalists – Maurice Cusson, Ronald J. Deibert, Mark Jaccard, and Brodie Ramin – will receive $7,500. The winners were chosen by a jury chaired by Canadian economist David Dodge and composed of Mark S. Dockstator, Jean-Marie Dufour, Brenda Eaton, Peter Nicholson, and Glenda Yeates.