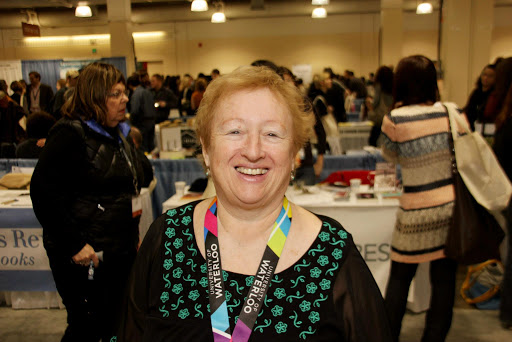 A major force in the world of Canadian poetry is stepping down from publishing. On Oct. 22, an online retirement party was held to honour Kitty Lewis, who is leaving her role as general manager of Brick Books after close to 30 years with the press. The party was one of the fall’s hot tickets: so many people wanted to tune in that many had to join a waiting list once the Zoom chat room attendance maxed out at 100 participants. “Doing it virtually really was an advantage because people could tune in from everywhere,” Lewis said.

Launched in 1975 by poets Stan Dragland and Don McKay, Brick is entirely dedicated to poetry. Lewis, who is McKay’s younger sister, was brought on as general manager, a position she has held for almost three decades.

“I landed into a situation that worked for me,” says Lewis, in typically modest fashion. “We were never going to be a place where there were going to be blockbuster books. The way I worked – and the way Don and Stan worked – no matter who it was, a beginning writer [or a veteran], everybody got the same treatment. That’s kind of the way I live my life.”

In the years before McKay and Dragland retired in January 2018, they approached Alayna Munce, production manager and a member of Brick’s editorial collective, to talk about succession plans for the house. This year, with the news that Lewis was stepping down, ownership transferred to Munce, poet and editorial collective member Sue Sinclair, and co-manager Brenda Leifso. The change in ownership will allow for continuity while also keeping the house in the family, so to speak. “Brick Books has changed hands in the spirit of a gift, and we have formal agreements in place so that at the end of our tenure it will be passed on again in a similar spirit,” Munce says.

Because plans for succession had been in the works, ideas about the ongoing editorial vision for the house are relatively well established. “The vision that we all have as a collective is to really take seriously the incredible legacy of this press that’s been around for 45 years and that has published only poetry the whole time,” Munce says. She suggests that Brick’s legacy positions it well to continue as a house with a reputation for publishing quality work to exacting editorial and production standards, while also making it an attractive house for new voices.

“We’ve been focusing in the last several years on expanding the range of voices and the kinds of poetries that we publish,” Munce says. “We were pretty much known as a lyric press, but that’s expanding.” This expansion includes a concerted push to include more diverse poets, a push that Munce feels is evidenced in the next few seasons’ lists.

Broadening the diversity and inclusivity of Brick’s publishing involves an explicit request for submissions from underrepresented authors, something Brick has implemented already, but it also comprises an increased diversity of voices on the acquisitions side. “One of the best ways to do that is to make sure that my editorial collective has a wide representation of people on it,” says Munce.

Notwithstanding McKay and Dragland’s voracious reading and willingness to consider a wide variety of poetic forms – Brick published Phil Hall in its early days – the press has become known as a publisher of lyric poetry, which Munce says makes it tricky when trying to court other writers in other forms. “I think part of what happens is that a press becomes known for a certain thing and then people self-select,” she says. “Counteracting that and trying to signal to the public that we’re actually really interested in a wider variety of forms becomes a challenge.”

The outward focus in recent years also includes Brickyard, the press’s spoken-word project that has focused exclusively on audio recordings to date, though Munce says that plans are in the works to transition to video as well. “I like to think of the press as holding space for poetry in Canada,” Munce says.

As Munce keeps one eye on the future, she is also aware of the past and the reputation Lewis secured in the industry as one of its most tireless and generous personalities. “Kitty is such a unique and incredible figure,” Munce says. “She was really a force of nature with massive shoes to fill.”

For her part, Lewis expresses pride in having been able to showcase the work of Brick’s authors by bringing them to the attention of the larger public. “I used all the resources that were out there and used them to the advantage of the authors and Brick Books,” Lewis says. “By the time the writers got to me, the hard work was done with the editors. Then they’d come to me and we’d talk about where they want to travel to promote their books.”

Now poised to take a much-deserved rest, Lewis expresses complete confidence in the future of the house she has done so much for. “I’m not worried about Brick Books continuing at all,” Lewis says, underlining her faith in Munce, who has learned about the press “from the ground up,” and her positive attitude toward the Canadian industry in general. “Publishing is full of really wonderful people.”

A live-streamed 45th anniversary celebration of Brick Books is happening today at 5:00 p.m. as part of the 41st annual Toronto International Festival of Authors.