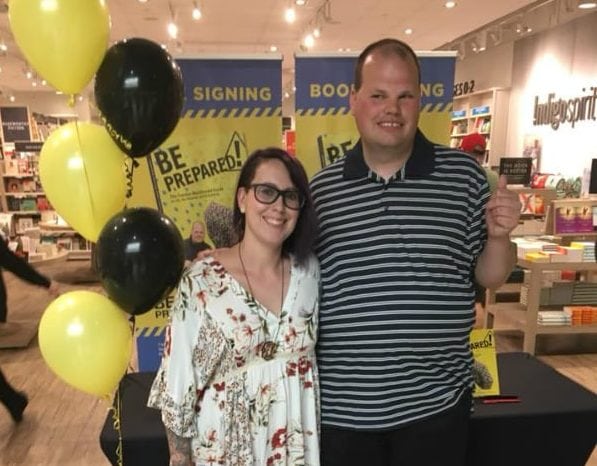 “This is Frankie MacDonald, from my own TV station, live from Sydney, Nova Scotia. It’s going to be extremely hot and humid temperatures all across North America on Sunday, July 1, 2018…. I recommend people drink a ton of water, drink a lot of fluids to keep you hydrated!”

That’s how YouTube personality Frankie MacDonald, 34, launches into one of his recent videos, and it’s pretty standard fare for his channel, dogsandwolves, which has attracted more than 170,000 subscribers – enough to earn him YouTube’s Silver Play Button. His fans are supportive; a recent petition titled “Help Frankie MacDonald Achieve His Dream of Being on Ellen” now has more than 31,000 signatures. His efforts have even been recognized in the House of Commons.

One of the hallmarks of Frankie’s videos is his catchphrase, “Be Prepared.” It’s this catchphrase that inspired Be Prepared: The Frankie MacDonald Guide to Life, the Weather, and Everything, the book Frankie and I co-authored.

The truth is when I started working on the book, I was not prepared at all. When Nimbus Publishing asked me to co-author the book with Frankie, we had no idea what the book would look like. We only knew it would have sections on meteorology, and it would be aimed at children in Grade 3 (because in Nova Scotia, that’s when they study the weather). Our jumping-off point was a 1,000-word essay Frankie had submitted, which featured the highlights of his life so far.

Shortly after accepting the project, a friend asked me if I was concerned about writing the book with MacDonald, who is on the autism spectrum. I’ve been asked this question by journalists, and my answer is always the same: No, I wasn’t. I was concerned about accurately representing Frankie and his views, and I did everything I could to make sure that happened, consulting with Autism Nova Scotia and spending a lot of time talking over small details with Frankie and other sources. But in terms of working with Frankie, I wanted to get to know him as an individual, to adopt his way of working, and to toss out my own pre-conceived ideas of how the process should go. Essentially, I went in unprepared, I did it on purpose, and it was the best approach I could have taken.

I first met Frankie on Aug. 6, 2017. I know the exact date because Frankie knows the exact date – just like he knows when Hurricane Joaquin struck Bermuda or how many centimetres of snow accumulated in Nova Scotia during a 2013 blizzard. We met at his house in Whitney Pier, where I spent time with Frankie and his grandparents. He showed me his action-figure prototype, and he explained the layout of his childhood playground. Basically, Frankie and I just got to know each other.

Later, I interviewed Frankie’s dad, Frank MacDonald, who shared a lot of great stories about Frankie’s childhood. Frankie also gave me the name of a couple of his former educators, and together, we figured out how to reach them. 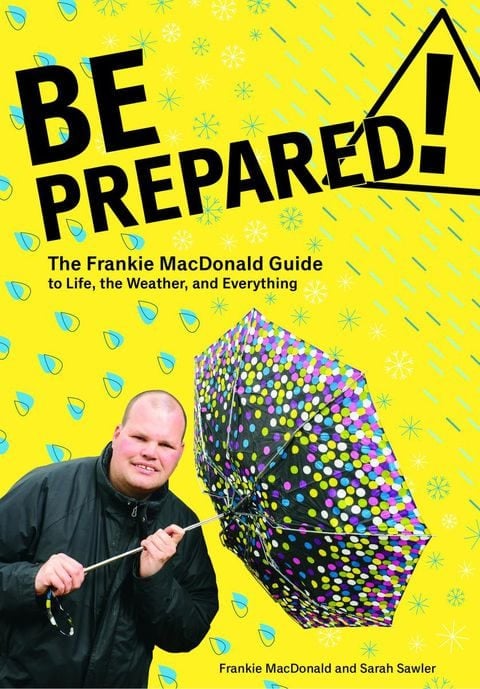 If writing this book was a quest, Frankie and I found the Holy Grail in the possession of a retired teacher’s aide named Pauline Simms. She was Frankie’s teacher’s aide at two different schools. For the first couple of years, she had to keep a daily journal while completing her practicum, which turned out to be an invaluable first-hand account of Frankie’s elementary school years.

Once all this information was collected, I started sorting the raw material by theme. We had info on bullying, on technology, and, of course, the weather. Then I started writing. I continuously checked in with Frankie on the facts and experiences in the book, and these check-ins usually happened over Twitter DM. It was unconventional, but it turned out to be a perfect collaborative tool for us – I could send him a quick note whenever I had a question, and he could reply whenever he had a chance.

When it came time to incorporate the weather facts, I emailed Frankie a list of questions I thought kids would be interested in, and he wrote out the answers for me. I used those answers as a jumping-off point and did the research I needed to do to add context. I couldn’t have hoped for a smoother process.

There was no way to prepare for the experience of writing this book, and looking back, I think that was a good thing. By being unprepared, Frankie and I were able to stumble into all the lucky breaks that allowed Be Prepared to become exactly what it was meant to be: a true collaborative effort that celebrates Frankie and everything he has achieved.