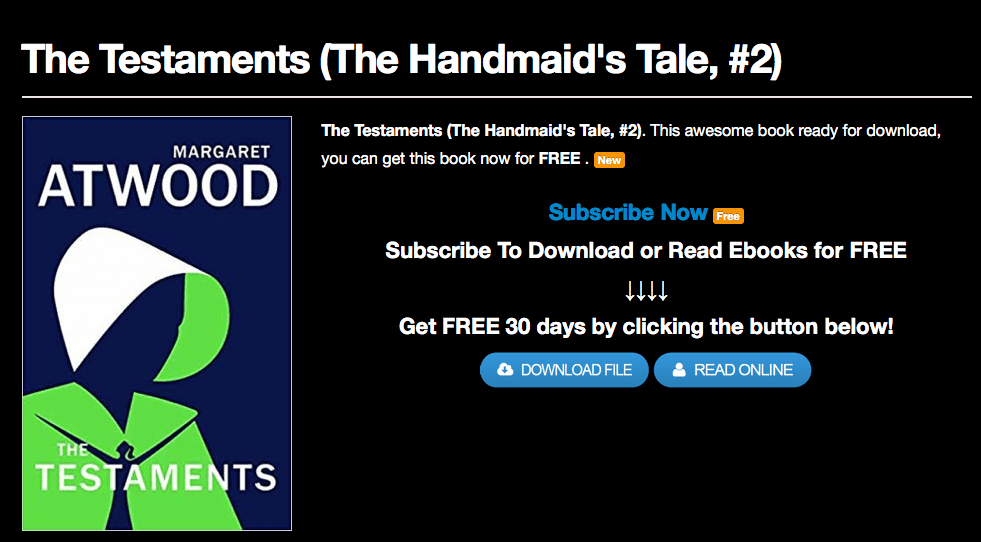 Well, that didn’t take long. It seems that dozens of pirated copies of Margaret Atwood’s wildly anticipated novel, The Testaments, published in Canada by McClelland & Stewart, are already available on LinkedIn’s Slideshare program. (Update: these links are part of a phishing scheme and should never be clicked. Wait and buy the book when it comes out on September 10!)

In a statement to Q&Q, a LinkedIn spokesperson said, “LinkedIn respects the intellectual property rights of others and requires that information posted by members be accurate, lawful and not in violation of the rights of third parties. That is why we have a robust process for submission of complaints concerning content posted by our members, outlined in more detail here. Anyone that has any copyright issues can report here.”

Considered to be the biggest title of the fall season, The Testaments’ pre-release has not been a completely blessed event. On Sept. 3, several U.S. media outlets broke the strict review embargo a week before the book’s official launch. (Editor’s note: Q&Q received an advance copy for reviewing only today.) The worldwide campaign starts with a midnight launch on July 9 at Waterstones Piccadilly in London, featuring celebrity-author panels, placard crafts, and a reading by Atwood. On July 10, an event in the city’s National Theatre will be broadcast live to more than 1,000 theatres around the world.

News that Amazon broke its distribution embargo with Penguin Random House, Atwood’s U.S. publisher, by shipping out hundreds of early copies has angered indie booksellers who were told to keep The Testaments off shelves until Sept. 10. Amazon apologized in a statement over its “technical error,” which was little comfort to retailers worried that they will lose customers hoping to be among the first to own an early copy by ordering through the online mega-retailer.

The American Booksellers Association released its own statement expressing “strong disappointment regarding this flagrant violation of the agreed protocol in releasing this book to the public,” and that the organization had recently been in touch with the U.S. Department of Justice and the Federal Trade Commission to discuss “the negative impact of Amazon’s market dominance in the book industry and U.S. retail overall.”

While pre-release embargoes are fairly common in the publishing industry, the amount of public attention this one is receiving has not been seen on such an international scale since 2007 when J.K. Rowling and her crew of publishers unsuccessfully tried to shut down early access to Harry Potter and the Deathly Hallows, the final book in the series.

In 2005, Vancouver’s Raincoast Books – Rowling’s then Canadian publisher – was granted an injunction from the B.C. Supreme Court to stop fans and the media from discussing the contents of Harry Potter and the Half-Blood Prince before it was released, or for possessing a copy without the publisher’s authorization. The order came about after a Real Canadian Superstore in Coquitlam sold a handful of copies prior to the July 16 launch. In an attempt to stop the leaks, Raincoast set up a 1-800 number through which customers who had purchased early copies could have them collected up by the publisher and then returned back to them on the official release date.