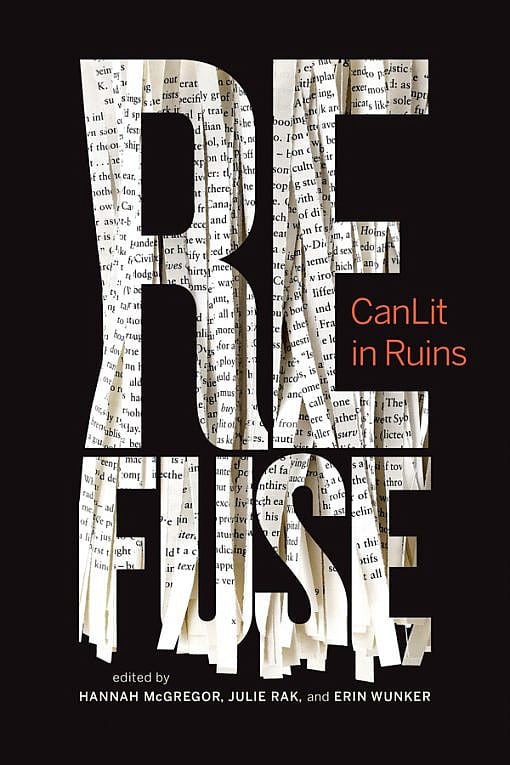 In 2017, Hannah McGregor, Julie Rak and Erin Wunker appeared on a panel in Toronto called #UBCAccountable: Feminist Past, Present and Futures in CanLit, at the conference of the Association for Canadian and Quebec Literatures. They found themselves in a room full of people who wanted to talk about what was happening in CanLit, and decided to further the discussion with a collection, Refuse: CanLit in Ruins, published by Book*hug.

The book features essays and poetry by 23 writers, including Alicia Elliott, Gwen Benaway, Kai Cheng Thom, and Joshua Whitehead. The writers question the existing framework, star system, privilege, and hierarchies in CanLit, speak to their own experiences, insist on accountability, and champion change. Editors McGregor, Rak, and Wunker spoke about their collection, and opening the CanLit conversation up to new voices.

What do you hope the impact of this book will be on CanLit?

McGregor: My main hope is that it opens out these vital conversations about systemic forms of exclusion, cultural appropriation, rape culture, ableism, colonialism, and so much more for a wider audience of people who care about writing in Canada. I hope it will facilitate more cross-sector conversations among writers and publishers and academics.

I’m also hopeful that it will bring greater attention to the work of our contributors, many of whom are early career writers working hard to open up spaces for new kinds of writing. We see a lot of the usual suspects in CanLit, but there’s so much more vibrant writing and thinking, building, and reimagining going on out there. I want people to know what’s at stake and what’s possible.

The book opens with a quote from Katherena Vermette in which she says she has “a lot of sad feelings about CanLit.” How do you feel about CanLit?

Rak: I’ve been waiting for CanLit to have a discussion about ongoing racism, sexism, and other issues for 20 years. I feel interested in what could happen. I think we have potential to blow open the way it has always worked and make it different.

I don’t know if that will be realized because we’re talking about an industry with some big players. But I’d really love to see some opening, and I feel hopeful about that. Having said that, I feel that the “dumpster-fire” events that have happened are absolutely lamentable.

As you were editing the book, what were some of the possible solutions that struck you as the most viable or potentially constructive?

Wunker: Careful listening and generous thinking. The ability to imagine lives and experiences that are not your own. A better understanding of the effects of settler colonialism and literary history.

You mention English professor Lauren Berlant’s concept of “cruel optimism,” which you describe as “a vague hope that things get better, without the political action needed to actually change what is wrong.” Why does that happen in CanLit?

McGregor: Canadian identity crystallized around a lot of “we are what the U.S. is not” – so the mosaic versus the melting pot, the peacekeepers versus the war mongers, the nice guys versus the bullies. For the most part those identities weren’t earned, they were invented and promoted through culture.

That sense of optimism about Canada’s goodness without substantial work to make Canada, well, good is in the DNA of a particular version of CanLit. Canadians like to tell a national story about being pleasant and tolerant much more than we like to implement the kinds of structural changes that would make this place livable for everyone.

How much action toward change do you think must be taken at an institutional level versus what authors, writers, and poets should be doing?

Wunker: I think about the struggle small presses have done and always have to do; of the work that institutions are slow to do; and the ways in which it is so easy to critique attempts rather than offer constructive advice. I think it is clear that institutions are run by people, and that people need to take responsibility for their engagement, their listening, and their willingness to respond to constructive advice and, when it’s needed, the firm demand for timely change.

Did you have a sense of urgency around the publication of the book, and if so, why?

Rak: We didn’t want the activist contribution to be left behind and forgotten. We’ve seen a lot of media coverage that did not, in our view, represent events in their fullness, and we wanted to have a discussion about what has happened to CanLit, what keeps happening, and what could be done about it. This is timely. We don’t want to have a discussion in the way that happens within colonialism a lot, where white people think that everything happened in the past and everything’s okay now.