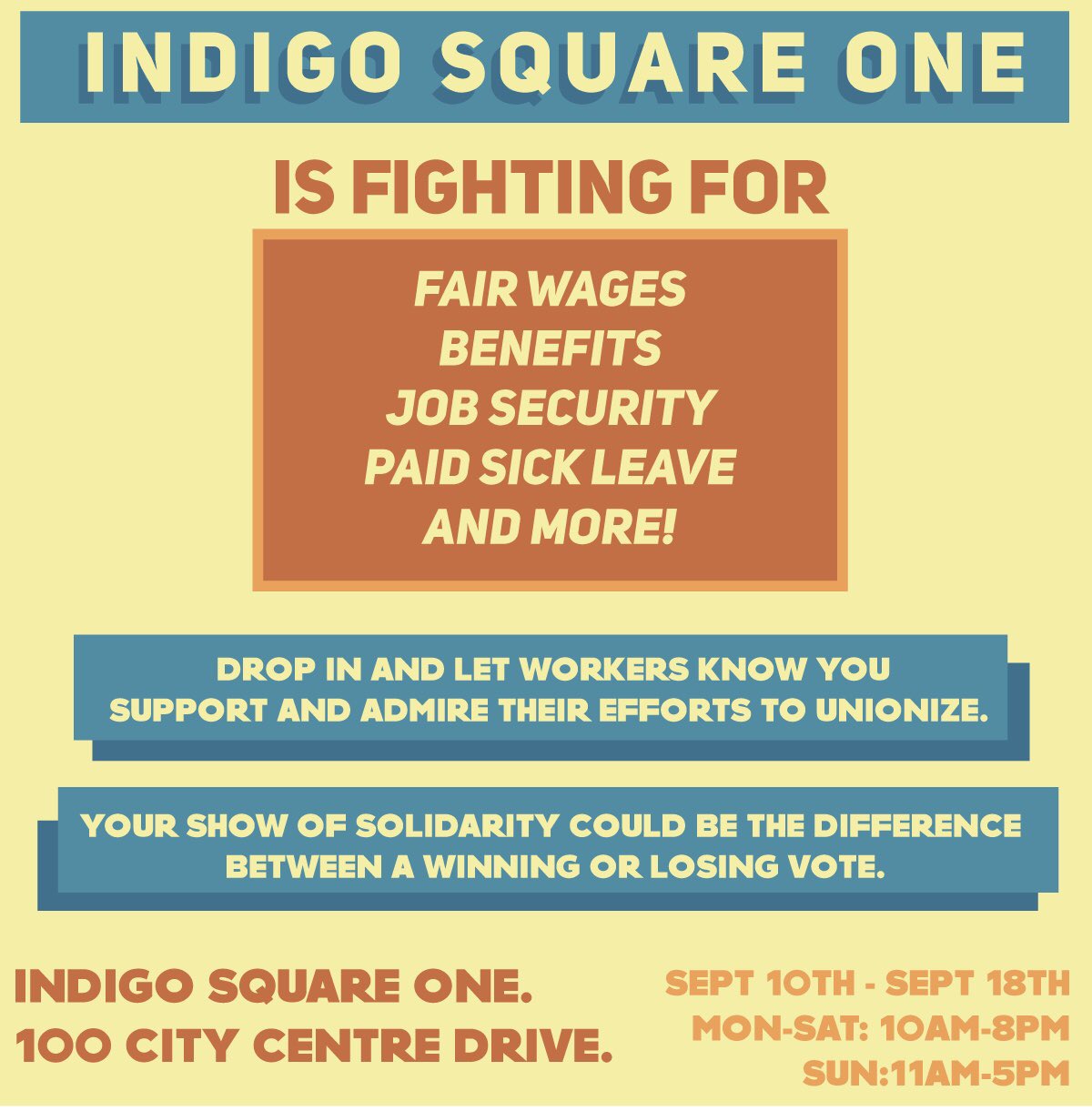 On Sept. 18, workers at the Indigo Books & Music location in Mississauga, Ontario, announced that they had filed an application to join the United Food and Commercial Workers union.

Voting for the store workers to join UFCW Local 1006A opened today at noon and will close in 24 hours. Kevin Shimmin, a national representative for UFCW Canada, spoke with Q&Q about the process leading up to this campaign and the potential outcomes of this groundbreaking decision.

The social-media campaign launched fully formed with graphics and videos of support from people such as Toronto-St.Paul’s MPP Jill Andrew and former MP Olivia Chow. Is that something that you would normally see in a campaign?
The workers were amazing. They have to take most of the credit for the online presence. It is very unique because it is Indigo and it’s a high-profile campaign. We’ve never had all those messages of support before.

How did the application process work?
Basically, one of the workers contacted us directly. Pretty much all the workers in the store had signed a petition because they were having to – or they were being forced to – clean the customer washrooms. And especially because of COVID, they were quite upset about that and concerned about health and safety. The petition didn’t really get anywhere. So then one of the workers from that petition contacted us.

What I always ask workers to do is to start an inside committee of like-minded individuals who want to unionize and who know the workforce well. I met with that committee a couple of times, and then gave them the link for electronic union cards – because of the pandemic we’ve gone to confidential electronic cards so people can sign with their phone or their computer. We needed at least 40 per cent of the employees signing cards to go ahead but we always aim for a lot more because really, the goal is to win the vote.

Once they had enough cards, we talked to the employees and then we made the application on Sept. 10.

The workers held a digital rally yesterday on Twitter and Instagram to increase public awareness. Was the intention to garner internal support?
That’s a golden rule in any kind of organizing campaign. In Ontario to win the vote, there has to be open support among the employees by the time you get to the vote to give everyone enough courage to vote yes. We realize that a lot of times, many people are going to sign the card and then prefer to stay quiet. But we definitely need things like rallies.

This is quite unique now during the pandemic because usually we would have a physical rally at the mall the night before the vote. But especially with restrictions on social gatherings, we have to be really careful about what we do. So the workers thought of this online rally.

There were also small groups of us at the mall yesterday and we encouraged the public to go into the store and just say good luck to the workers with “we’re proud of you” messages.

The goal is to make anybody who’s feeling really nervous, or not sure what to do, feel strong enough to vote yes.

If the vote goes through, what happens after that?
What happens immediately is there are two things that are protected by law. As long as we win the vote, then the employer first has to keep everything the same, and they can’t make any changes without the consent of the employees. They’re legally obligated to negotiate in good faith with us. Then we’ll have a series of meetings soon after the vote where we’ll ask the employees for all their proposals for negotiations. And then we’ll ask them to elect a few people from amongst themselves to be on the negotiating committee. The negotiations could take a few months.

We anticipate that, although Indigo is known as quite an anti-union company, that as long as we win the vote they will sit down and bargain in good faith.

In past dealings with retail chains with multiple locations, do you often see subsequent stores or locations forming their own unions as a result?
We’ve seen, for example, an individual Sirens clothing store in Brampton where the issues seem to be very particular to that store, and that didn’t really grow into any other Sirens unionizing. But then another case would be with Mountain Equipment Co-op. Last year we unionized one location in Vancouver and then another location in Victoria came along soon after that. We were also signing cards here in Ontario.

Sometimes we’ll see that ripple effect, and we’re definitely hoping that’s the case with Indigo, because we have heard from a number of workers from other locations who are expressing the same concerns. Because the social-media presence has been so huge around this vote, it has helped them get in contact with us.

It’s interesting that there might have been talk about organizing before, but really it’s COVID that’s brought at least this specific issue to the forefront.
That’s what I’ve been finding with organizing in general. In retail and food-processing plants, cannabis production, there were a lot of serious issues there already. And then because of the urgency of the health and safety concerns, it’s motivated people very quickly to contact us.

Indigo is a publicly traded company. How does that impact this type of movement?
It helps because, first of all, it’s against the law for a company to say they would close their doors simply because their staff unionizes. But I think also when it’s a corporate-owned store – and it is quite a high-profile store at Square One – that gives even more weight, more confidence that this store is going to remain open whether it’s unionized or not for the foreseeable future.

Solidarity with Square One Indigo workers fighting to form a union so that they can collectively bargain for higher wages, benefits, paid sick leave, and job security. Follow @indigo976union on Insta for more, and show these young workers your support before their vote on Monday! pic.twitter.com/2j09wORm9i