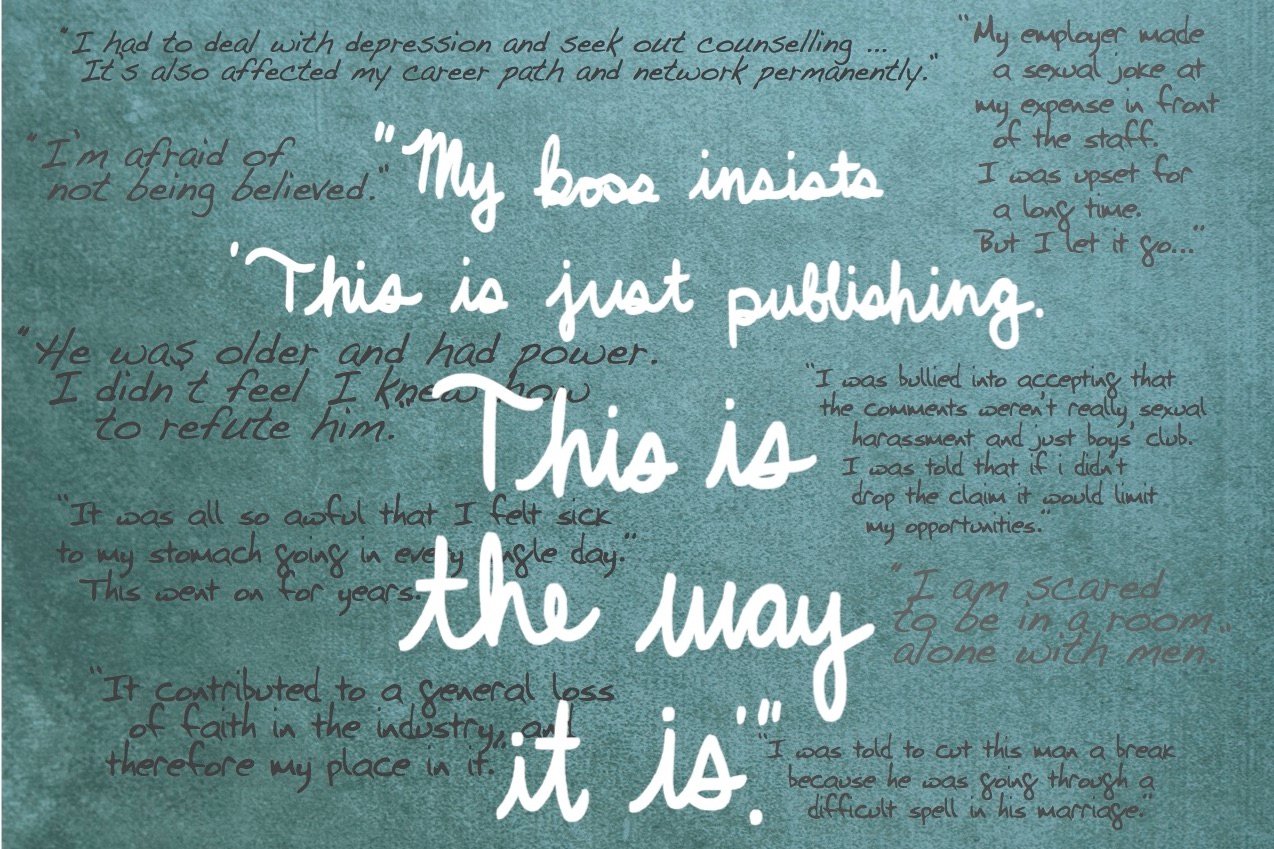 This story appeared in Q&Q’s sexual-harassment survey feature in the May 2019 print edition.

Q&Q’s sexual-harassment survey called upon respondents to offer suggestions as to how the industry can improve itself.

One of the most popular proposed solutions was a shift in hiring practices that would see many of the older men in top positions of power retire, allowing for an increased number of women leading sales and executive teams – particularly, Black, Indigenous, and other women of colour.

There were calls for a cross-Canada code of conduct similar to the U.K.’s Industry Commitment to Professional Behaviour in Bookselling and Publishing, which was established in 2018 following a harassment survey from the trade magazine The Bookseller.

Some suggested unionization as the only way to protect employees, while many others suggested that the industry should investigate offering a centralized reporting service and tribunal arm, and subsidize counselling for those who have been harassed.

In addition to those major industry initiatives, there were several suggestions that employers and individuals can act on quickly, and with little cost:

This is an issue particularly at smaller independent publishers and companies without human-resources departments. Many respondents stress the importance of having clear guidelines as to what constitutes harassment as well as sexist, racist, homophobic, and ableist behaviour. Those guidelines and the repercussions for inappropriate behaviour should be communicated not just to staff but to all their authors as well. This could be enforced through signed codes of conducts. In particular, there were numerous comments about inappropriate incidents by male authors toward their female publicists and the need for well-articulated boundaries in that professional relationship.

“The majority of the harassment and inappropriate behaviour I have experienced in this industry has come from white heterosexual men of a certain generation. It’s hard not to enter into new work relationships with straight male writers (which is required of me in this job) without some trepidation,” wrote one respondent. Another publicist suggested that author expectations need to be better managed from day one: “I would like to see publishers be clear with their authors early in the process about what they can expect from publicity and what it really means to work with a publicist. I would like publishers to be very clear with their staff that they will take their side and back them up if an author becomes inappropriate or makes sexual remarks.”

2. Rethink alcohol policies
From award ceremonies to festival parties, the publishing industry, it seems, always has a drink in hand. Several respondents expressed concern about the culture of alcohol that exists within the industry, and the fact that at book launches, physical expressions such as hugging and kissing can become more inappropriate as more wine is consumed. A few respondents suggested that behaviour guidelines should be posted at venues, along with a zero-tolerance policy that would be enforced by event organizers.

Companies are also being asked to rethink their internal policies around alcohol. One respondent spoke of an incident that took place in a hotel lobby at a conference during which employees at their company were allowed to expense back alcohol purchases. “I do not believe the employee would have drunk as much if they had to pay out of pocket,” they wrote. “I believe allowing unlimited expensing of alcohol created an unsafe environment.”

3. Create new support systems
Managers need to be more aware of and sensitive to the situations they place their staff in. Many woman in junior positions admitted they are nervous about attending book launches, conferences, trade shows, or other events on their own, but are afraid to say so for fear of “looking weak” or not fulfilling their job duties. Some young women spoke of feeling vulnerable while being approached by men at events, and the pressure to remain friendly – regardless of the man’s behaviour – so as not to negatively affect their company’s reputation.
Several respondents suggested that anyone attending events should keep an eye out for younger people who may be involved in a vulnerable situation, and step in without being asked: “I will scan the room at parties and insert myself into conversations if I observe someone looking uncomfortable in a conversation with someone who is powerful/an industry influencer. I hope others do the same. Look out for each other.”