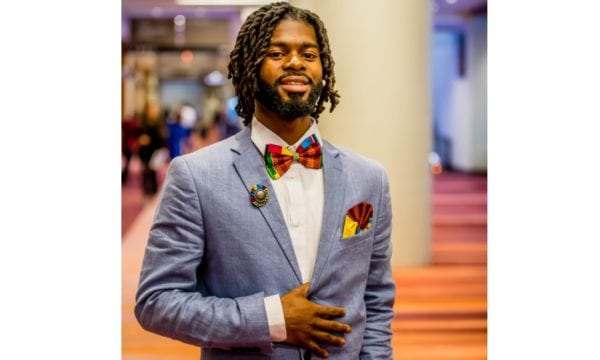 For the first time ever, Ontario has a poet laureate.

Scarborough, Ontario, spoken-word artist Randell Adjei was unanimously confirmed to the role by members of provincial parliament on Wednesday.

Adjei, 29, says he feels grateful to have been chosen as the inaugural provincial poet laureate, and hopes that this news brings a bit of light to those who hear it.

“I feel as though there’s something brewing, something happening amidst all of the challenges that we’ve been facing throughout the past year,” he says. “It’s nice to know that there’s some positive news that many of us are hearing at this point in time.”

He hopes to use the role to champion poetry across the province, and also to connect Ontarians and help them learn more about one another.

“I want Ontario to know about Ontario. A lot of people in Toronto have never been to Sudbury, Thunder Bay,” he says. “Art brings people together, period, and I’m hoping that my poems and the work that I’m able to do can literally do just that.”

Although his plans for his first composition are tentative, he says he will be looking to “inspire folks around resilience right now.”

He plans to use his two-year tenure as poet laureate to elevate the profiles of poets across the province, and is interested in developing a poetry map of Ontario that would keep people informed about poetry happenings in their communities. Adjei is also committed to bringing poetry and creative arts to students in the province.

A member of the League of Canadian Poets, Adjei first discovered poetry through the support of a Grade 8 teacher. He was facing some challenges at the time, and she introduced him to the idea of writing as a way to express himself and work through them.

“I realized that I didn’t have to be so angry all the time: there was a medium, an opportunity that I could use to express myself,” he tells Q&Q.

He has continued to hone his craft since then, and published his first collection, I Am Not My Struggles, in 2018. In 2012, he founded R.I.S.E. (Reaching Intelligent Souls Everywhere) Edutainment, an arts organization that runs programming that gives youth across the Greater Toronto Area access to safe and inclusive spaces to explore self-expression through the performing arts. Adjei’s work in the arts has led to a number of awards, including Best Spoken Word at the 2014 Black Canadian Awards and CBC Metro Morning‘s Torontonian of the Year in 2015. R.I.S.E. was awarded the Toronto Arts Foundation’s Arts for Youth Award in 2018.

Windsor-Tecumseh NDP MPP Percy Hatfield introduced the Poet Laureate of Ontario Act (In Memory of Gord Downie) in honour of the late Tragically Hip frontman in 2019. The act passed unanimously in December of that year. Adjei told Q&Q he is thankful for Hatfield’s persistence in championing the role, and thankful for Downie’s legacy of using poetry to bring attention to stories of social injustice.