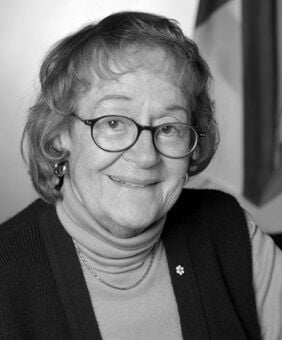 The Nova Scotia writing community is grieving the loss of Budge Wilson, prolific children’s book author, who passed away on March 19, 2021. She was 93.

“The world shines brighter because of Budge’s generosity of spirit and her child-like curiosity, both of which played a pivotal role in her writing,” says Carol McDougall, author and board member of the Canadian Children’s Book Centre.

Wilson’s illustrious writing career began with the publication of her first book, The Best/Worst Christmas Present, in 1984. She followed the milestone with more than 30 books. Her 1990 short-story collection The Leaving won the Canadian Library Association Young Adult Book Award.

“She was a long-time friend of the CCBC, touring as a part of Canadian Children’s Book Week in 1989, 1991, and 2002,” says McDougall. “One of Canada’s greatest literary treasures, Budge’s stories always captured the complexity of the human spirit.”

It’s Wilson’s spirit that Sarah Sawler, marketing manager at Conundrum Press, recalls with great affection, “I’d won this special opportunity in a writing contest put on by the school,” she says. “Budge read the story I’d written, and gave me her feedback. I wish I could remember what she said, or even which story I’d submitted. But in the end, it doesn’t really matter because the most important part – the part I still remember vividly today – was her warmth, her care, her openness, and her encouragement. For a nine-year-old with a budding love of writing, the takeaway was this: I wrote a story, and this kind, approachable published author liked it enough to tell me to write more.”

In 2004, Wilson was made a Member of the Order of Canada and was awarded the Distinguished Alumnae Award from Halifax’s Armbrae Academy.

“A true pioneer for Canadian children’s writers, she helped pave the way for other writers and put Canadian stories on the world stage,” McDougall says.

Wilson’s books have been published in 13 countries and translated into 10 languages. One of her most successful books was 2008’s Before Green Gables, a prequel to L.M. Montgomery’s famous series.

“I know I’m not alone,” says Sawler. “Over the decades, I’m sure Budge had plenty of library lunches with budding writers, and this is a legacy all its own. While she leaves behind an incredible body of work, the care she took when interacting with young writers will have a long-lasting impact as well, as these writers continue to write compelling stories of their own.”