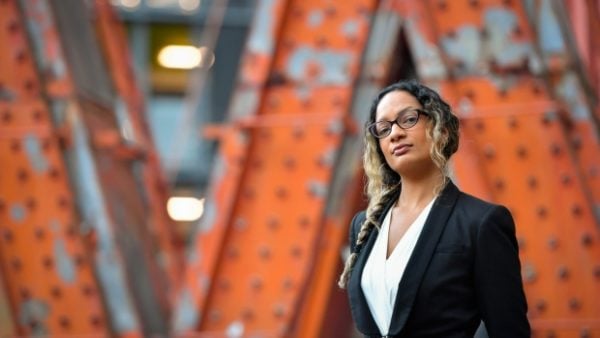 According to Room’s publisher, Meghan Bell, the festival was conceived in 2014, well before the Trump presidency and #MeToo, and is an action, not a reaction to what’s going on in the world or in CanLit. “It’s an opportunity for emerging writers and very established writers to share the stage in a safe, supportive, feminist environment,” she says.

New this year was a stronger focus on writing craft. Chelene Knight, the magazine’s managing editor and the festival’s programming director, says the programming committee added more writing workshops, and introduced manuscript evaluations for the first time. Sixteen one-on-one timeslots were made available for writers to discuss their work with established authors and poets Anna Ling Kaye, Adèle Barclay, Jen Sookfong Lee, and Knight herself.

“I’ve attended so many conferences where I felt I was just a number, and this was a way for people to participate and feel a part of it,” Knight says. “We wanted to give something to our supporters they don’t get elsewhere.”

Add-on fees for the manuscript evaluations were kept to $35 each because financial accessibility in an expensive city is important to the festival organizers. Attendance at the rest of the conference was by donation this year. “People were far more generous than I expected,” she says. “They’re allowing us to keep the festival free for the people who wouldn’t otherwise be able to attend and I think that’s incredible.”

Growing Room also received funding from the BC Arts Council, the City of Vancouver, and the Access Copyright Foundation. One of its sponsors, HarperCollins Canada, supplied the “I read badass women” buttons delegates wore all weekend.

Another sponsor, however, almost cost organizers the festival. SchoolCreative – Institute of the Arts offered its fully wheelchair accessible venue to the festival for no charge. Yet mere weeks before the festival was set to begin, Bell received an anonymous email warning about sexual harassment allegations against Michael Coleman, one of the school’s co-owners. Bell immediately forwarded the email to The Globe and Mail to investigate, even though with no funds allocated to finding another venue on such short notice, it could have jeopardized the festival.

As Globe reporter Marsha Lederman was investigating allegations against Coleman, he stepped down. Growing Room’s leadership team, who had worked with the school’s president Scott Gamble all along, decided the festival would go ahead as planned. For most participants, that drama remained behind the scenes.

“I wouldn’t have been comfortable keeping events in a space co-owned by somebody with those allegations,” Bell says, adding that ensuring the festival is safe for all participants is a priority for its organizers. “It’s an ongoing project to make the festival safer, more comfortable and more inclusive every year,” she says.

Bell says the stand-out panels this year included a celebration of Indigenous writing brilliance, a “love in lit” panel that deconstructed relationship clichés, and a discussion on how writers can take care of themselves when writing about trauma.

Author and panelist Farzana Doctor says she left Growing Room feeling heartened: “Those of us in the margins, and our allies are building the new literary landscape this country needs.” Another author and panelist, Gwen Benaway, says the festival shifted away from mainstream feminism to offer space for intersectional feminist conversations. “That was my take-away from the festival: how different we all are and how the literary work being generated by female writers in Canada right now is a reflection of that difference.”