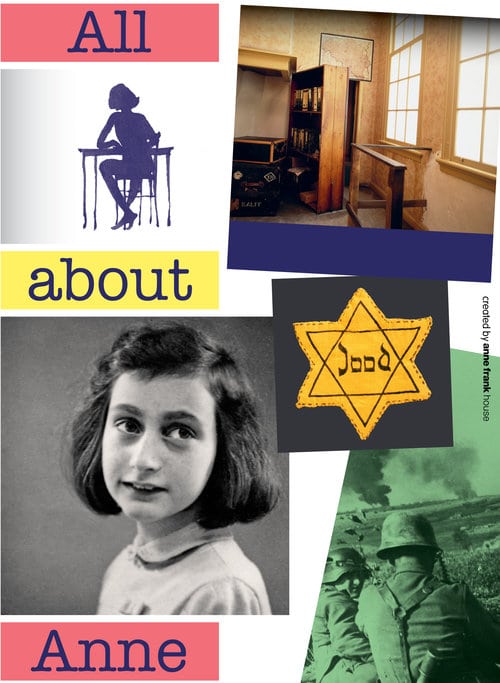 In the pantheon of Holocaust literature, a few seminal titles dominate: Night by Elie Wiesel, The Boy in the Striped Pyjamas by John Boyne, Maus by Art Spiegelman and The Diary of a Young Girl by Anne Frank. Seventy-one years after the latter was first published, Anne Frank House – the organization behind the museum in Amsterdam – created the non-fiction children’s book All About Anne, with illustrations by Huck Scarry, son of kidlit giants Richard and Patricia Scarry. Margie Wolfe, publisher of Second Story Press, talks about the new book, Holocaust literature for children, and her personal connection to Anne’s story.

There are a lot of books about Anne Frank. Why did Anne Frank House want to create this one?

They decided they needed to respond to kids’ questions about the war, why it started, why Anne Frank’s family had to leave their home, why she was killed. Kids know about the diary, but this book gives greater context, more detail to children who have read the book and visited the house. It was put together from materials that had never seen the light of day before. Anne Frank House fills in a lot of the holes that no one else can really do. They are the experts.

How did Huck Scarry get involved as illustrator?

He was brought in by Anne Frank House. Huck Scarry has been a supporter of the museum. They had their archivist dig deep looking for images, and anything they had missing, he created images for. They take the text and give it an added depth that they would not have had without his beautiful work.

How did All About Anne come to Second Story Press?

We have been meeting with people from Anne Frank House for a number of years at Frankfurt and Bologna [book fairs]. About a year ago, they asked if we would possibly be interested in this book for Canada. With a little bit of chutzpah, we said we’d like North American rights.

We could have done a number of Anne Frank books before and we haven’t. This project was impossible not to do.

What does All About Anne mean to you and to Second Story?

For Second Story, it fits exactly what we do: girl-focused books, human-rights books, justice books. It means a huge amount that Second Story was trusted to do this book and to treat it in a way it deserved.

Personally, partly why I do all of this is my own family background. My parents were survivors, I was born in a displaced-persons camp at Bergen-Belsen. It’s different than the concentration camp [where Anne Frank was killed]; the displaced persons camp was down the road, but there’s the obvious connection. But even if I wasn’t, who wouldn’t want to do this book?

How do young readers react to Holocaust stories?

We have now had two decades of experience publishing Holocaust books for young readers. We learned from the very first book that it is about how it’s told. The first, second and third books – The Secret of Gabi’s Dresser, Clara’s War and Hannah’s Suitcase – were all major prize winners. Kids read those books from cover to cover, they were pulled in by the content, they didn’t go away and cry. They felt compassion and empathy, they connected with the characters.

What are your plans for the book?

We are trying to cover all the potential bases — trade, educational, library, and other specialty markets. This is not a time-sensitive book, so we hope during the course of the year to bring one of the writers from Anne Frank House to Canada. The book has been purchased by Scholastic book clubs and School Library Journal and Junior Library Guild are putting their stamp of approval on it. And we’ll be attending all of the major international events.

What do you think will surprise/move young readers?

If you’ve only read the diary, you’ve read about a child in misery, in hiding, trying to live as best she could, but basically a prisoner of her circumstance. Here there are also so many images and stories about Anne and her family, what a happy child she was. I think readers will see “this could be me.” You’re trying to understand the circumstance to this child’s life and death and all the horrible things that happened to her just because of her religion. I think anybody would be moved by that.

Why are books like All About Anne still important?

The lessons from this book are so relevant today because of all the intolerance, racism, anti-immigrant, anti-Semitism, and bullying. There is a real urgency to have kids understand the consequences — the worst consequences — of people treating each other badly.

A couple of years ago I went to Bergen-Belsen. There is a gravestone for Anne and her sister that’s in the middle of nothing. You see notes that people have left, flowers from people who have come from all over the world. This story is so important. It keeps the lessons of Anne alive.