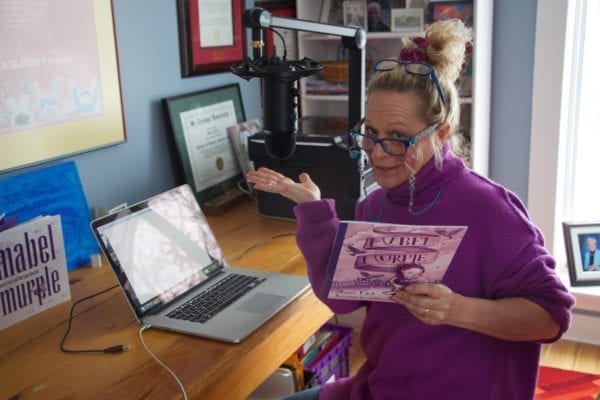 Sheree Fitch is talking utter nonsense. She believes that is what is going to get us through these difficult times. The River John, N.S., children’s writer, poet, and bookstore owner has embraced podcasting as a reaction to the isolation of COVID-19. Her show, Mabel Murple’s Popping Purple Wordspinning World, is all about the pure joy that wordplay and tongue-twisters can bring us.

“Words can spin you away into other worlds and, for a little while, we can have a distraction from the chaos, a safe place to be together,” says Fitch. “I do believe that listening to human voices telling stories is the creation of a safe place. So even if this is a 10-minute distraction for somebody, I think it’s a good thing.”

In each episode (and they are coming at a furious pace of one every two days), Fitch tells the story behind one of her books or nonsense poems; reads the story or poem in her musical tongue-tripping way; and ends with a gentle suggestion for listeners who want to try writing a poem or some other creative endeavour themselves.

Fitch never intended to do a podcast; in fact, she’d never even listened to one. But one day she was unsuccessfully trying to upload to the internet a clip of herself reading a poem and the next day, Stephen Hurley – creator of the education-focused internet radio/podcast site, voicED Radio – reached out to ask if she would be interviewed for his latest podcast, I Value Canadian Stories, featuring Canadian children’s authors. Fitch mentioned her technical difficulties and her desire to read her poems online. A partnership was born.

“I used to work in radio years ago and I am a bit of a stickler for good sound quality,” says Fitch. “And I didn’t want to show my face and do that page-turning thing. I just think it’s magical to hear words and make the pictures in your own head. I wanted to continue the oral tradition that I grew up with, of my mother singing nonsense songs and how we used to ask my dad to ‘tell stories with your mouth talking’ – which meant no pictures, no book.” 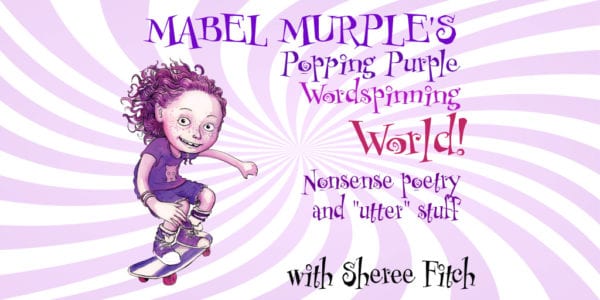 As a listener, it’s hard to believe that such a professional-sounding podcast (clear audio, tight editing, music, and an eye-popping visual on the landing page) came together in just a week. After Fitch connected with Hurley, he told her she needed a good quality microphone (i.e. a Blue Yeti mic, which runs about $150). Fitch’s tech-savvy friend Nick Gunn not only ordered the mic but also put together the podcast’s graphic, which features a Sydney Smith illustration from Fitch’s Mabel Murple book (Nimbus Publishing). When the microphone arrived, Gunn left it at the doorstep as social distancing demands, and Fitch’s husband, Gilles Plante, set it up when Fitch went out for a walk. Then she and Hurley recorded the first episode, with Hurley at his home in Milton, Ont., and Fitch at hers in River John, using the podcast-interview software from Zencastr.

Fitch admits that she did get some constructive feedback from someone who works at the CBC, telling her she needs to be more focused and to figure out who her audience is. But Fitch has got her own way of approaching this: “I’m not doing polished scripts, I don’t want it to be that,” she says. “I’m basically just going, ‘Okay, today I’m doing There Were Monkeys in My Kitchen, and I’ll tell the story behind the story of how that came about, and I’ll pretend that who I’m talking to is, well, anybody.”

According to Hurley, it’s working: “I press record and let her go – and the magic just happens. It’s almost as if you’re there at the kitchen table with her. I didn’t anticipate that it was going to be this popular. But it blew up our website, tripled our visitors at least. The audience that she has is loyal. You have adults that grew up with this stuff, who introduced it to their kids, and grandparents who are coming back to it. It’s really kind of a glue for people.”