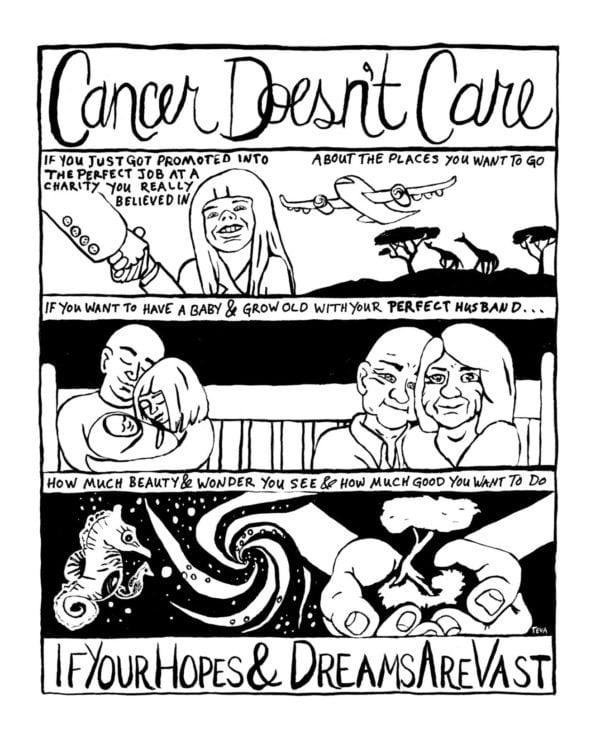 When it comes to creating art, Teva Harrison believes idea dictates form. As an artist whose experience ranges from stop-motion animation to painting to comics, she says it’s the unconventional form of her latest project that allows it to keep evolving.

Four years ago the Toronto author and illustrator was diagnosed with Stage 4 metastatic breast cancer. Her book In-Between Days – part graphic memoir, part essay collection – is a stripped-down, intimate observation of life with a terminal disease. The project has taken on various iterations, most recently as an art exhibition featuring illustrations from the book, currently on display at the Winnipeg Art Gallery. “It’s so exciting to me that it’s a book that is half essays and half comics,” Harrison says. “All these different opportunities, because the book has this unusual form.”

In-Between Days eluded categorization even before being published in 2016 by House of Anansi Press. In fact, Harrison didn’t even set out to write a memoir. She began drawing as a form of therapy, for no one else but herself and her psychiatrist. When she showed her illustrations to two friends who were also living with metastatic breast cancer, “they both independently had the same reaction, which was: if you could see your way to sharing these, I think they could help people feel less alone,” she says.

Harrison created a blog and went on to have her work published online by The Walrus before being contacted by an editor at Anansi. The book was a finalist for the 2016 Governor General’s Literary Award, the 2017 Joe Shuster Award, and winner of the 2017 Kobo Emerging Writer Award.

“This project, it’s got a flexibility depending on what I’m applying it to that makes it fun in an ongoing way,” she says.

Harrison relishes the opportunity to recreate the project in new forms, such as featuring experimental musicians at live readings. She recently narrated an audiobook of the memoir, briefly describing the illustrations she felt were necessary alongside the essays. So when Stephen Borys, CEO of the WAG, approached her, it was an opportunity to explore another medium. Borys had seen Harrison’s work in The Walrus and The Globe and Mail and asked her where she had exhibited it. She replied nowhere.

“And at that very moment I thought, wow, I’d love to do an exhibition. It’s a very powerful story,” he says.

Curated by Borys, the exhibition – which opened Nov. 11 and runs until Jan. 13, 2018 – showcases 40 of approximately 60 drawings selected from throughout the book. Harrison says having her work exhibited in the WAG is a dream come true: “It was a moment of my life, for sure. Like a capital ‘M’ moment.”

More than that, it’s given Harrison an opportunity to explore a new medium and a chance to broaden her audience and create new conversations. In-Between Days has turned Harrison into a committed advocate. She’s spoken at medical centres in Toronto and gave the keynote address at a metastatic breast cancer conference in New York City. She believes it’s important to bring these discussions into cultural centres and other places as well, “because what we talk about is what gets funded,” she says.

Creating conversations is important to Borys, too. The WAG is inviting community organizations and schools to the show, and partnered with Cancer Care Manitoba for the opening and a Q&A with Harrison.

“For me putting those drawings in the gallery, it’s true it takes it to a different level in terms of, okay, it’s in a gallery now, you look at it differently,” Boys says.

At the end of the exhibit is a space for visitors to leave a story or drawing in response to the work. By virtue of the number of cards left in the first week, Borys says, he can already tell Harrison’s work is making an impact. “This doesn’t always happen, people are sharing stories and thoughts. That’s a whole other dynamic of a museum exhibition.” 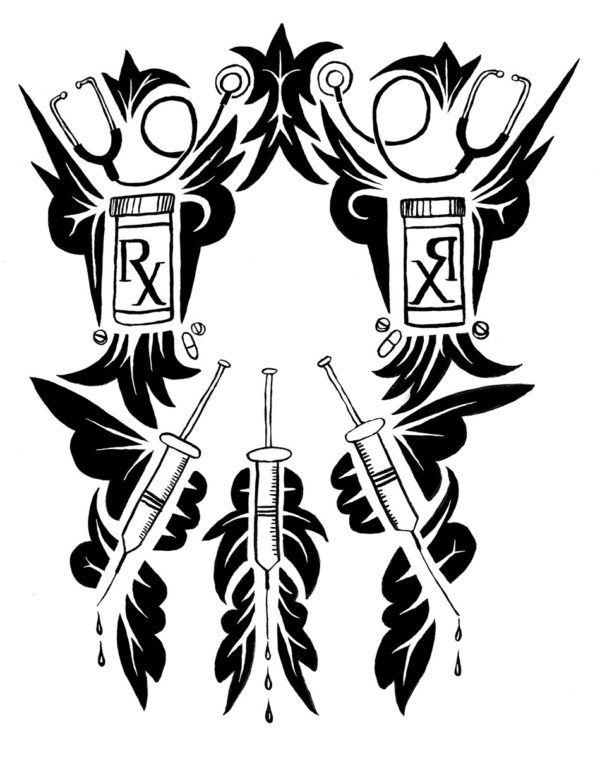