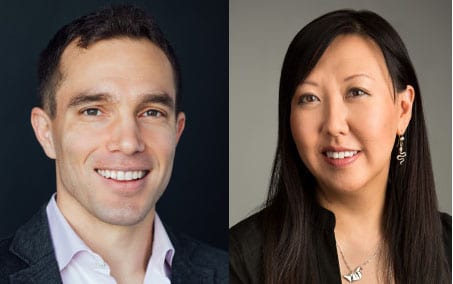 After David Albertyn’s debut thriller Undercard (House of Anansi Press) came out in early 2019, fellow authors were advising him to organize appearances at book clubs. Though his novel was critically well received, finding book clubs to speak at wasn’t an easy task. Albertyn did receive four invitations, but he already had some kind of personal relationship with each group.

On Christmas Eve day, Albertyn had lunch with fellow Toronto author Ann Y.K. Choi, whose 2017 debut novel, Kay’s Lucky Coin Variety (Simon & Schuster Canada), was popular on the book-club circuit. They lamented how challenging it was for authors to find private book clubs to speak at, and how wonderful it would be if there was a place where the two groups could connect.

“It dawned on us that if the book clubs were keen on having us and the authors wanted to reach them, this seemed like an amazing opportunity to act as the bridge,” says Choi.

By the end of the lunch date, the two had formed the idea for The Authors’ Book Club, an online hub for clubs and authors, where prospective hosts can view participating writers’ profiles and make a direct connection via the website.

Excited by the idea, Choi began research that night, contacting clubs to learn more about their specific needs.

“A lot of them had thought about inviting authors but were too intimidated,” says Choi. “The vast majority really wanted to connect with authors.”

Choi also began scouring the websites of Canadian and Indigenous authors to gauge the interest in book clubs.

“We really want people to read more Canadian and Indigenous authors, and we really want them to care and to make that connection on a deeper personal level,” says Choi. “I think everything we’re doing is about building relationships.”

Within a few weeks, the site was launched, and the number of writers continues to grow. To date, more than 35 have come on board, including bestselling authors such as Uzma Jalaluddin, Jesse Thistle, Marissa Stapley, Samantha Bailey, and Jenny Heijun Wills, who won the 2019 Hilary Weston Writers’ Trust Prize for Nonfiction for her memoir Older Sister, Not Necessarily Related. Choi and Albertyn credit Fiona Ross – a teacher librarian and a member of the planning committee at the Festival of Literary Diversity – for her enthusiastic promotion of the initiative on Twitter. (Ross is now listed on the website as an organizing member.)

“The responses came so quickly, clearly a lot of people have been feeling this way,” says Albertyn.

The Authors’ Book Club doesn’t set rules or rates – those are negotiated directly – but the website offers etiquette rules and tips for authors on how to keep a healthy life balance and to avoid fatigue while promoting their books. There are future plans in the works for events, a newsletter, and an online book club led by the roster of participating authors.

“We can’t underestimate the power of the private book club,” says Albertyn, “and how healthy it is for the industry.”