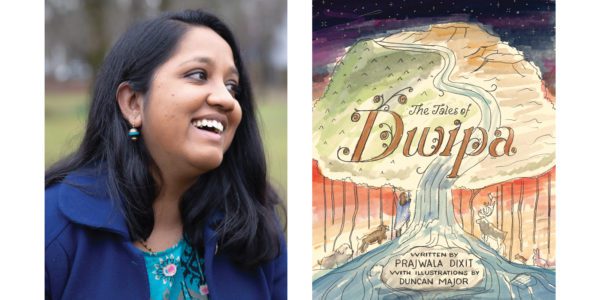 Prajwala Dixit; The Tales of Dwipa

I can still recall the lilt in my Ajji’s voice when she recounted the tale of the monkey and the crocodile from the Panchatantra, just like women before her had done for centuries. This ancient collection of short tales is my inheritance from the country in which I was born and raised, and I wanted to share it with the country I now call home.

Stories have always been a powerful way to deliver drops of knowledge and hold a mirror up to society. The Panchatantra was no exception to this. Consuming these stories as a child allowed me to understand the socio-cultural ecosystem I was growing up in. In addition to Ajji’s retellings, small leaflet books with a single fable from the interwoven tales were available for about five rupees at roadside markets and railway platforms in India, a cheap thrill that became a staple of my reading diet.

When I became a mother, I longed to share these stories with my daughter. But a quick scan of bookstores and libraries revealed that, while the literary heritage of the East has reached other regions of the globe, the West isn’t (yet) so permeable to the rich cultural legacy of its sister societies. In an effort to provide my little one with a pluralistic and global imagination, I began work on my adaptation.

The vast geography, culture, ecology, and languages of the places I have inhabited in India and Canada offered themselves up to be married in my imagination and led to the formation of the mythical island, Dwipa, where the book is set. Besides switching up the animals in the stories and merging the natural ecosystems of both countries to suit the geography of Dwipa, I tapped into the unique lexicons of India and  Newfoundland and Labrador. Words from Kannada, Hindi, English, Marathi, Sanskrit, and Newfoundland dialect all have a place in these stories, which follow the adventures of Mima (a feisty young girl), Neena (a Newfoundland dog), and Lok (a Labrador retriever) across their island. The trio’s journey across Dwipa allows them to expand their knowledge of their home and empathize with the creatures they encounter – from a vegetarian orca to kind and supportive neighbour voles. My stories retain the original structural narrative of the Panchatantra but differ both in how they unfold and in how they end.

The Panchatantra was written before 300 BCE by Pandit Vishnu Sharma in an effort to impart Neeti Sastra, the scripture on wise conduct, to the dim-witted sons of a king. While they illustrate important values, they are not free of misogyny, patriarchal abuse, sexism, shadeism, or classism. The endings, especially, are quite morbid, usually resulting in death, much like Grimms’ Fairy Tales.

In retelling these stories, it became imperative to address the apathy, division, and intolerance that exists in humanity to pass down my inheritance in a manner that befits the world where my child (and others both like and unlike her) will receive it.

Through this collection of stories, my goal is to introduce issues that may appear too complex for younger minds (but are no less pertinent) in an entertaining fashion, with a strong melanin-rich protagonist, all while preserving the innocence of childhood.

What began as a means to allow my daughter to enjoy the richness of her heritage led me closer to my roots, as well as to my chosen home. My hope remains that The Tales of Dwipa will invigorate the imagination, provoke thought about the lives we lead, and provide meaningful enjoyment and engagement for all, regardless of their age.

Prajwala Dixit is an award-winning journalist, author, filmmaker, and playwright living in and working from St. John’s and Bangalore.