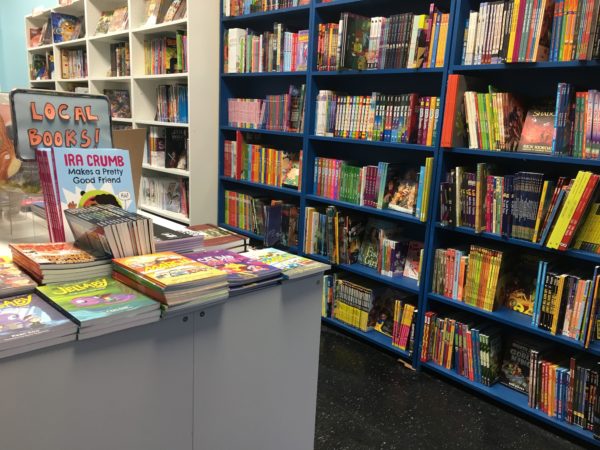 Just over a year after closing its former Mirvish Village location, Toronto children’s comic bookstore Little Island Comics has a new home. The kid-focused offshoot of the comic shop the Beguiling shut its doors at the end of 2016 when redevelopment of the Honest Ed’s site and the surrounding block began and both stores were forced out of their original locations.

Little Island Comics’ new space is located at 323 College St. on the northern edge of Kensington Market, two doors down from the Beguiling at 319 College St. Last summer, the Beguiling expanded into the retail space between the two locations, which is used for exhibitions and special events. The three adjacent storefronts are all connected indoors.

According to Little Island store manager Andrew Woodrow-Butcher, plans weren’t always clear for the store. “We’d sort of retired the brand or, as it turns out, sent the brand on vacation,” he says. “Because we weren’t really sure if we were going to find an opportunity like this.”

The reopening was “a bit of a combination of plan and luck. The questions were always real-estate questions,” he says. “The space opened up next door to our new grown-up shop, and we just seized the day.”

Woodrow-Butcher views the new space as a full-service comic store for readers from board books upwards, where Little Island readers can move on to the Beguiling as they advance to teen and adult content. “I think the value of Little Island in its old iteration and its new iteration is that it has a bit of a different feel and it is inviting to kids and to grown-ups who are bringing their kids in,” he says. “We’re maintaining that separate feel; we have a different colour scheme; a different team of booksellers who work in there who are the specialists in the stuff for young people.”

The Little Island sales staff also oversee the Beguiling’s library-services division, and had been working exclusively in that capacity throughout 2017. “They were still talking about kids’ comics all day, every day, but just not in a public-facing way,” says Woodrow-Butcher. “So we’re super happy to get back and have retail customers in addition to our school and library customers.”

The new Little Island store had a soft opening in late February, but the official launch takes place during the March Break week, with 20 per cent off all books from March 10–18. An event is planned for March 17, featuring children’s comic creators Scott Chantler, Naseem Hrab, Brian McLachlan, Ryan North, Kean Soo, Britt Wilson, and Tory Woollcott.