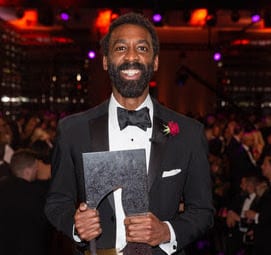 Ian Williams, who tonight was named winner of the 2019 Scotiabank Giller Prize for his novel Reproduction (Random House Canada), told Q&Q in January of this year that he is planning to call his next novel Disappointment.

The Vancouver-based, Brampton-raised writer, poet, and professor may want to rethink that title after being named recipient of the $100,000 prize, the richest accolade in Canadian literature.

Reproduction was selected by Donna Bailey Nurse and Randy Boyagoda (jury co-chairs), José Teodoro, Aminatta Forna, and Aleksandar Hemon, who read 117 submissions before picking the winning title. In a statement, the jury said of Williams’s debut novel: “It’s an engrossing story of disparate people brought together and also a masterful unfolding of unexpected connections and collisions between and across lives otherwise separated by race, class, gender and geography. It’s a pointed and often playful plotting out of individual and shared stories in the close spaces of hospital rooms, garages, mansions and apartments, and a symphonic performance of resonant and dissonant voices, those of persons wanting to impress, persuade, deny, or beguile others, and always trying again.”

During his emotional acceptance speech, Williams gave a shout-out to Margaret Atwood, who celebrated her 80th birthday at the ceremony, which was broadcast live via CBC Television. “Margaret Atwood over there is the first book I bought with my own money at a bookstore in Brampton. And I bought that book because I had good public school teachers who pushed poetry on us.”

Williams also acknowledged the legacy of Giller Prize founder Jack Rabinovitch, who initiated the prize in honour of his late wife Doris Giller.

“There’s been a lot of talk about the evil of capitalism, but every once in awhile we find people like Jack Rabinovitch,” Williams said. “People who can work within the system to do things that follow the passion of things they love.”

The other Giller shortlisted authors were: