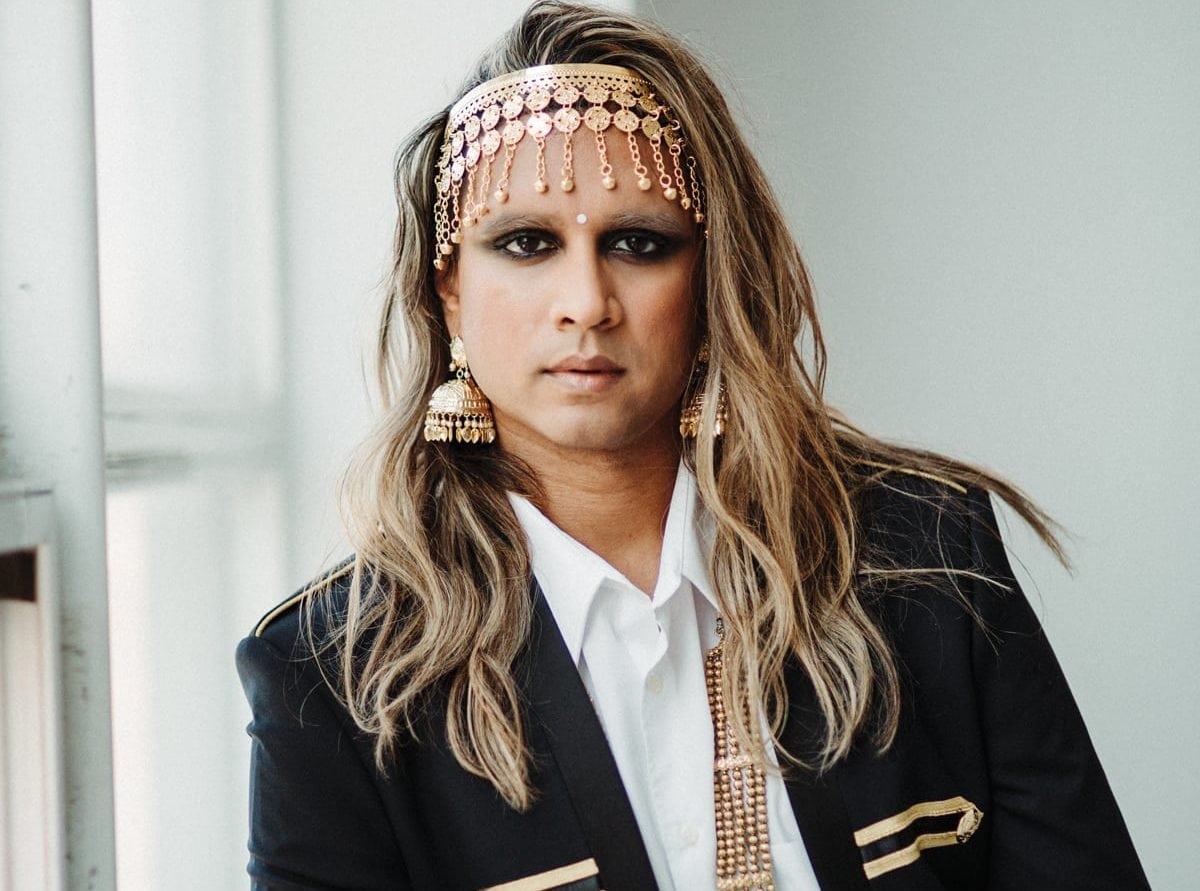 Before Vivek Shraya boarded her flight from Calgary to Toronto for Quill & Quire’s photo shoot, she tweeted a GIF of Beyoncé posing, fist defiant in the air, as a car explodes behind her. “Mood,” Shraya wrote.

Self-empowerment has been on the 37-year-old multidisciplinary artist’s mind as she prepares to launch her memoir-manifesto I’m Afraid of Men (Penguin Canada) on Aug. 28. The volume shares its title with a song on Part-Time Woman, Shraya’s Polaris Music Prize–longlisted EP with the Queer Songbook Orchestra. But “I’m afraid of men” also serves as a thesis statement for her confessional, confrontational critique of our male-centred culture.

The 13,000-word book sports a trim size akin to a small notebook, a format inspired by the popularity of Chimamanda Ngozi Adichie’s incendiary 2014 call-to-action We Should All Be Feminists. Penguin Canada managing editor David Ross reached out to Shraya in August 2017 as part of an initiative to actively recruit more LGBTQ writers. As they discussed potential projects, Shraya’s ideas crystalized around the notion of masculinity. The year before, on her birthday, she began using the pronouns “she” and “her” and speaking publicly about her transition, an experience that sparked fresh insight on the restrictive culture of gender.

In the book, the University of Calgary creative-writing professor reflects on her everyday anxiety around men through vignettes that demonstrate how male intimidation has cultivated this fear.

“For me, one of the beautiful things about the book is that it’s complicated,” Shraya says, following her photo shoot. “I am also queer. I am attracted to men. I love men. [But] men and masculinity have harmed me, which has created a fear in me.”

The book was announced last October, in the wake of the Harvey Weinstein sexual-assault accusations, though Shraya’s deal had been finalized before #MeToo went from trending topic to cultural reckoning. As she wrote, daily revelations of men abusing their power unfolded. Shraya was concerned that a reader might expect one central, terrible incident of violence from her own story. Instead, she shares a lifetime of tiny traumas that beat her down until she was bruised to the core.

“In the morning, as I get ready for work, I avoid choosing clothes or accessories that will highlight my femininity,” Shraya writes. “Doing so will make me feel unsafe on public transit. On the hierarchy of harassment, staring is the least violent consequence for my gender nonconformity that I could hope for. And yet the experience of repeatedly being stared at has slowly mutated me into an alien.”

This passage comes from a section that details how Shraya grapples with gender in seemingly small ways all day, every day. The material resonated with Shraya’s friend and early reader Trisha Yeo, who teaches sexual diversity studies at George Brown College in Toronto. She intends to use it to show her students how pervasive gender codes really are.

“Because we’re so immersed in gender, I find it’s challenging sometimes to get students to really see the impact of gender in their lives,” Yeo says. “I think it would be interesting to go through that piece with students, to motivate us all to reflect more critically on the ways gender shapes our daily lives.” 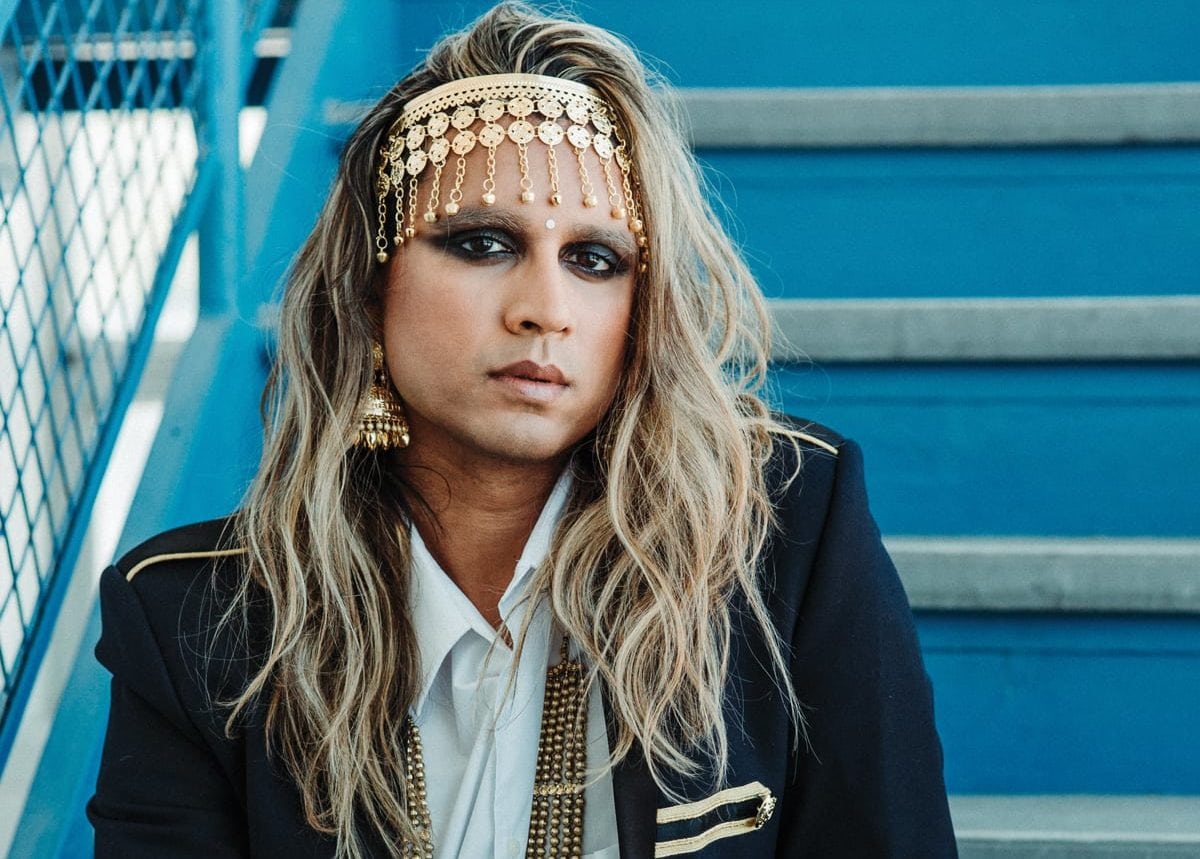 In addition to Shraya’s four previous titles for adults and young people, she has produced short films, photography exhibitions, and music both as a solo artist and in the duo Too Attached (with her brother Shamik Bilgi). Penguin Canada was eager to link the book to Shraya’s wider artistic output, which is how the author and publisher settled on the title.

“It kind of terrified me to be honest,” Shraya says. “Which is funny. I was afraid of the title.” Her publisher worried, too. “At one point someone suggested just Afraid of Men, but I’m Afraid of Men brought a personal element to the title that I found stirring,” Ross says. “There have been times where I worried about the vulnerability of it. And our solution to that was the back.” He flips the book over, exposing the back cover, which reads, “Men are afraid of me.”

Growing up in Edmonton, Shraya felt alienated by her differences and used the arts, particularly music, as a shield. “I used to sing a lot in my religious organization,” she says. “Singing was the thing that often protected me. In junior high and high school, singing was the thing that made me friends with other girls. By learning the songs that they were interested in, suddenly they became friends with me and that became a form of protection. Having the popular girls like me because I could sing Joey McIntyre and New Kids on the Block meant that when Jock Bro was calling me fag, one of the girls would step in.”

Though Shraya surrounds herself with a rich community of female allies, one of the book’s most powerful sequences comes at the end, when she steps back to survey the women who stood silently by as she was targeted by male aggression. “In transness, I’ve certainly had a lot of fantastic women supporters and allies, but I have also experienced all kinds of policing from women,” she says. “I thought that it was very important to name that.”

In transitioning, Shraya hasn’t swapped one closet for another. Rather, she continues to confidently break gender binaries. Take the photo shoot that accompanied Part-Time Woman, for which Shraya posed in a leather jacket over a sequined purple dress, cut low to expose her chest hair.

“Because I spent so much of my life trying to figure out how to be a boy, now that I’ve come out as trans I really don’t want to spend the rest of my life trying to assimilate to what our conventional ideas of womanhood look like as well,” she says. “I want to be able to just leave my house and feel good about myself and not worry about my safety.”

M. McLean, an instructor in the Assaulted Women’s and Children’s Counsellor/Advocate program at George Brown and one of Shraya’s close friends, says that kind of first-person perspective is vital. “These conversations are relatively new and getting them into print, as with Vivek’s book, is extraordinary,” McLean says. “We know very little about how transwomen experience male violence. We know statistics, usually based on murders. Microaggressions, everyday experiences of violence and intimidation, those things we don’t have a lot of knowledge of. That needs to be there. I can’t say what needs to be said, but I need to hear it.”

Even as she shares her own story, Shraya has committed to elevating other marginalized voices. She is currently reviewing submissions for VS. Books, her imprint with Vancouver’s Arsenal Pulp Press, which publishes and mentors writers of colour ages 18 through 28. The imprint’s first work, a short-story collection from Scarborough, Ontario, writer Téa Mutonji, will be published in spring 2019. Shraya is also at work on her anticipated follow-up to the 2014 novel She of the Mountains, which was published by Arsenal Pulp.

Despite the vulnerability in her writing, Shraya wants to embrace the power that comes from firing shots. Hence the military jacket today — Shraya is a general in a gender revolution. “I’m afraid of men, but I’m here and I’m resilient,” she says. “I live my life every day despite that fear.”