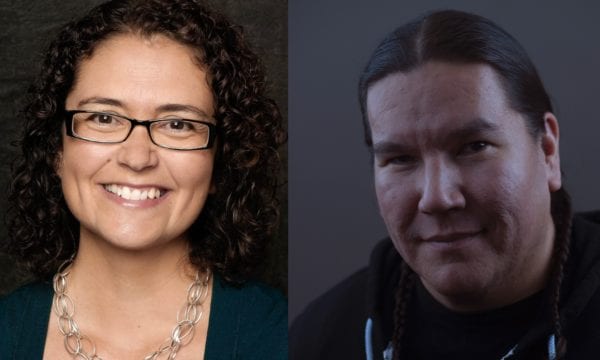 Storykeepers, a new monthly podcast about Indigenous literature by co-hosts and authors Waubgeshig Rice and Jennifer David, aims to bring conversations about Indigenous books to a wider audience in an audio book-club format.

“We are all story keepers in various senses,” says Rice, the Sudbury-based author of Moon of the Crusted Snow (ECW Press) and a member of the Wasauksing First Nation near Parry Sound, Ont. “It’s our responsibility collectively, as readers and as writers, to make sure that those stories go forth for future generations.”

David, the Ottawa-based author of Original People, Original Television: The Launching of the Aboriginal Peoples Television Network and a member of the Chapleau Cree First Nation in northern Ontario, first raised the idea of teaming up on a podcast about Indigenous books years ago when Rice was also living in Ottawa, but the timing wasn’t quite right.

She brought the podcast idea up with him again last fall, thinking he might have more time for a project like this since stepping back from his broadcast journalism role at the CBC last May to focus on his literary career.

“It was an opportunity to talk about books, because I do that on a regular basis anyway,” Rice says. “And I figured, why not record these chats that we have? We’ll bring in other friends too and make that accessible to everybody else.”

As they resumed their conversation about how they could make a podcast like Storykeepers work, they discovered an Ontario Arts Council grant that could help them cover the overhead costs that they’d been planning to pay themselves.

The funding was approved in January, Rice says. As well as paying for recording equipment and web-hosting costs, they also plan to use it to pay guest hosts an honorarium and fund book giveaways for listeners.

“We want to encourage literacy in all communities, but specifically First Nations and Indigenous communities, and just give people an avenue to think about how they can enjoy and engage with books and have discussions on their own,” he says.

In the first episode, released March 4 on Apple and Spotify, Rice and David discuss Daniel Heath Justice’s Why Indigenous Literature Matters, “an important entry point for any reader who wants to understand the importance of Indigenous literary works,” Rice says.

David and Rice have a list of about 30 books to discuss in future episodes that includes canonical works as well as newer titles. Although they will mostly be discussing fiction, they also plan to include nonfiction, poetry, and plays. The pair plans to feature a guest host with each episode, who will have a chance to promote their own book on the show.

The April episode will feature a discussion of Maria Campbell’s Halfbreed.

Rice, whose aunt first introduced him to Indigenous literature when he was a teenager, says he would be delighted if Storykeepers serves as a similar introduction for the next generation.

“My aunt has since passed on, and I’ve always given credit to her for what I have been able to do over the course of my literary career,” he says. “If I can sustain and extend her legacy in that way, that’s a big honour.”