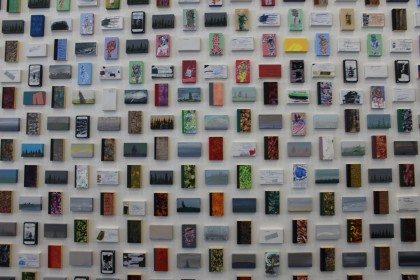 A collage of library-card-sized paintings

Winnipeg-based artist, curator, and professor Cliff Eyland’s paintings may be small – the size of a 3″ x 5″ library card, to be exact – but their effect is monumental.

Eyland, who died on May 16, four years after a lung transplant, was a well-known figure in the Canadian art world. He was a lifelong fan of libraries, which appeared frequently as a conceptual theme or location for many of his works, dating back to the 1980s when he was a student at the Nova Scotia School of Art and Design in Halifax.

In 2005, more than 1,000 of his card-sized paintings were installed at Winnipeg’s Millennium Library. He topped that number in 2014, when 5,000 of his miniature works were hung in the public foyer and on the fifth floor of the new Halifax Central Library. That same year, his 600-painting installation opened at the Meadows library in Edmonton.

In 2014, Eyland spoke to Q&Q about his Halifax installation and his fascination with libraries: “I was brought up by working-class parents who took us to the local library. I love libraries for lots of reasons, and early on I was imprinted with a deep passion for public libraries. I read myself out of the Dartmouth library, and a little later I read everything in the Amherst, Nova Scotia, library.

“But when as a teenager I visited Mount Allison University’s library across the marsh from Amherst – I knew I couldn’t ever read myself out of that. So I would spend my free time paging, for example, through every issue of every bound set of art magazines in Mount Allison’s collection in a hopeless attempt to read everything they had on art.”