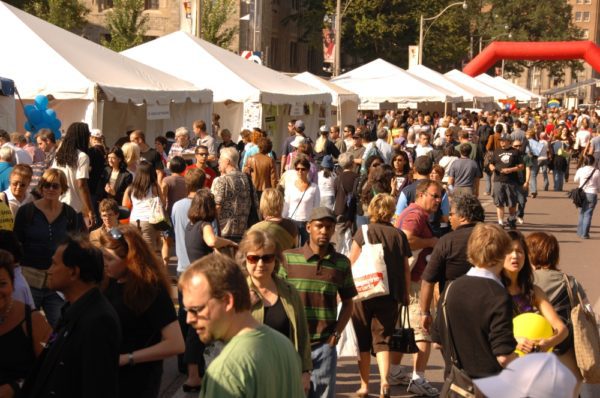 After two years as a virtual festival, Word on the Street will return to the street this spring, as announced by the organizers of the Toronto festival on March 17. “We’re excited to reconnect with our roots at Queen’s Park and welcome back our community of readers, writers, publishers, and booksellers to celebrate storytelling, ideas, and imagination,” stated festival director David Alexander in the announcement.

For the first time in its history, Word on the Street will take place in June instead of September. “During the pandemic we had the opportunity to rethink some of our traditions, and we decided to shake things up a bit,” says Rebecca Diem, WOTS Communications Manager. “Our new spring date is better aligned with the school year and for readers looking to shop for summer reads, Father’s Day gifts, and more.”

The 33rd edition of Canada’s largest open-air book and magazine festival will run June 11–12, featuring readings by more than 100 authors and the traditional outdoor marketplace.

This year will also see the event return to Queen’s Park Crescent, between Bloor and Wellesley Streets. In 2015, the festival shifted to Harbourfront Centre during the remediation of Queen’s Park North.

The festival will also continue year-round virtual events and a few special in-person pop-ups at smaller sites throughout the city. Full festival details will be announced in the coming months, including on the festival website.

Tags: Word on the Street Toronto