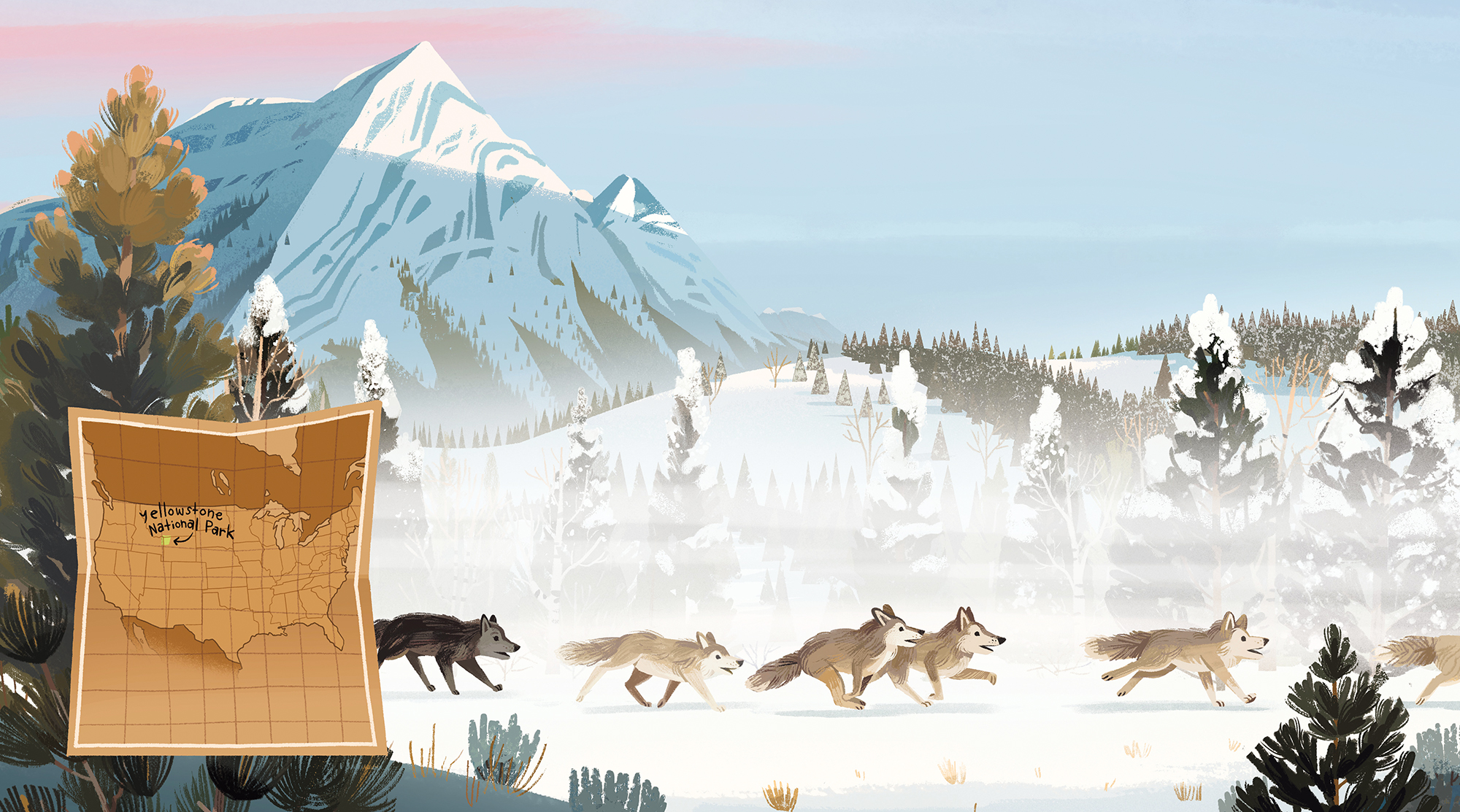 Bringing Back the Wolves
Jude Isabella and Kim Smith, ill.
Kids Can Press

Bringing Back the Wolves is not your typical animal-facts book. This is a mesmerizing non-fiction narrative about how, 30 years after grey wolves were killed off in Yellowstone Park, this apex predator was reintroduced and an ecosystem was changed in many unexpected, fascinating ways. The wolves’ co-dependence on bears, songbirds, beetles, and so many more plant and animal inhabitants of the park is simply and beautifully detailed in this page-turner about interconnectivity. 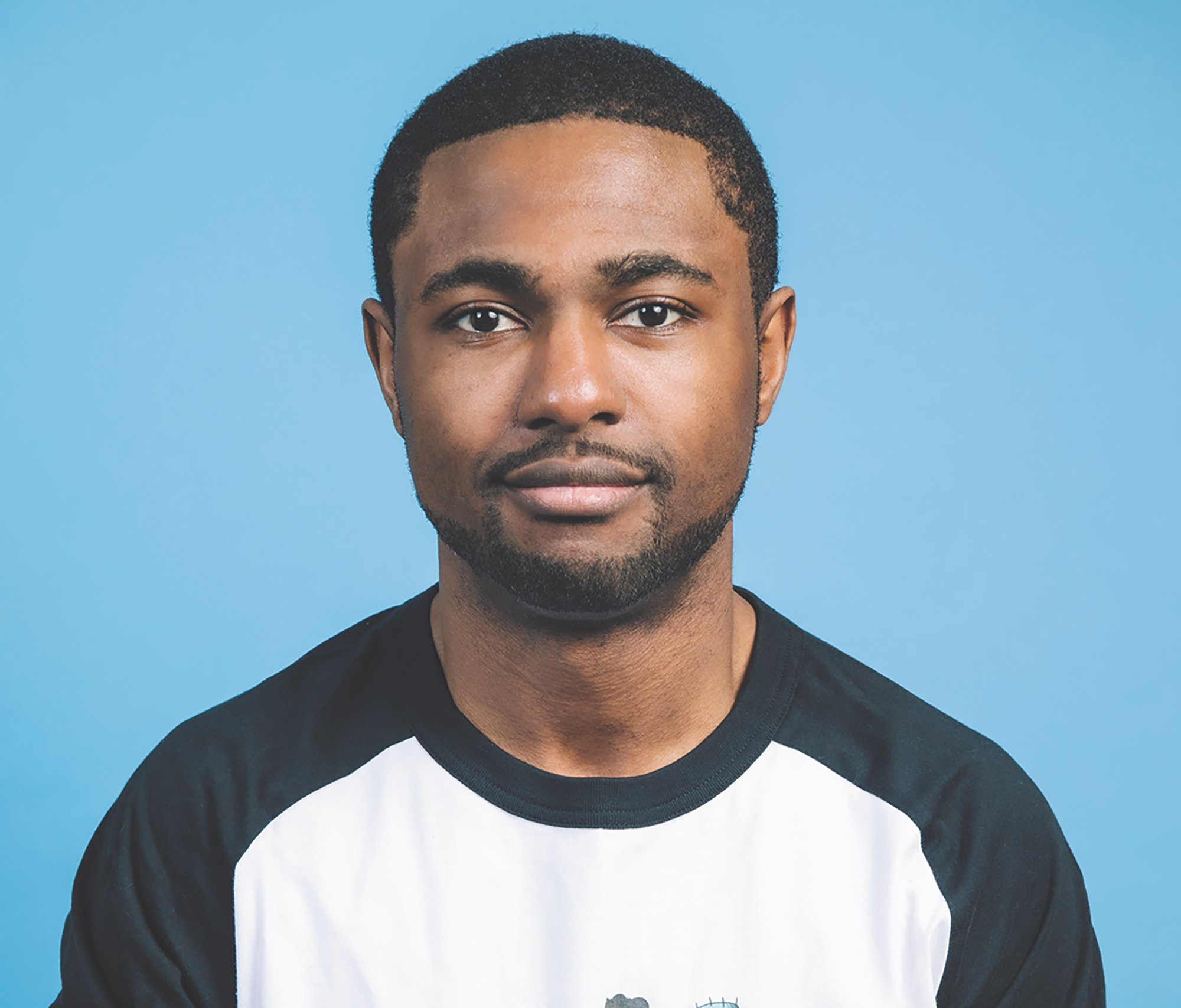 In the span of two novels, Ben Philippe has become the voice you didn’t know you were missing: sarcastic, neurotic, well read, quick with the pop-culture references, and hilariously observant. Here, Philippe tackles class and race in New York’s Upper West Side as two Black teens fall in love while waiting for their college acceptance letters to arrive. A Columbia grad himself, Philippe brilliantly exam-ines the Ivy League-or-bust mentality. 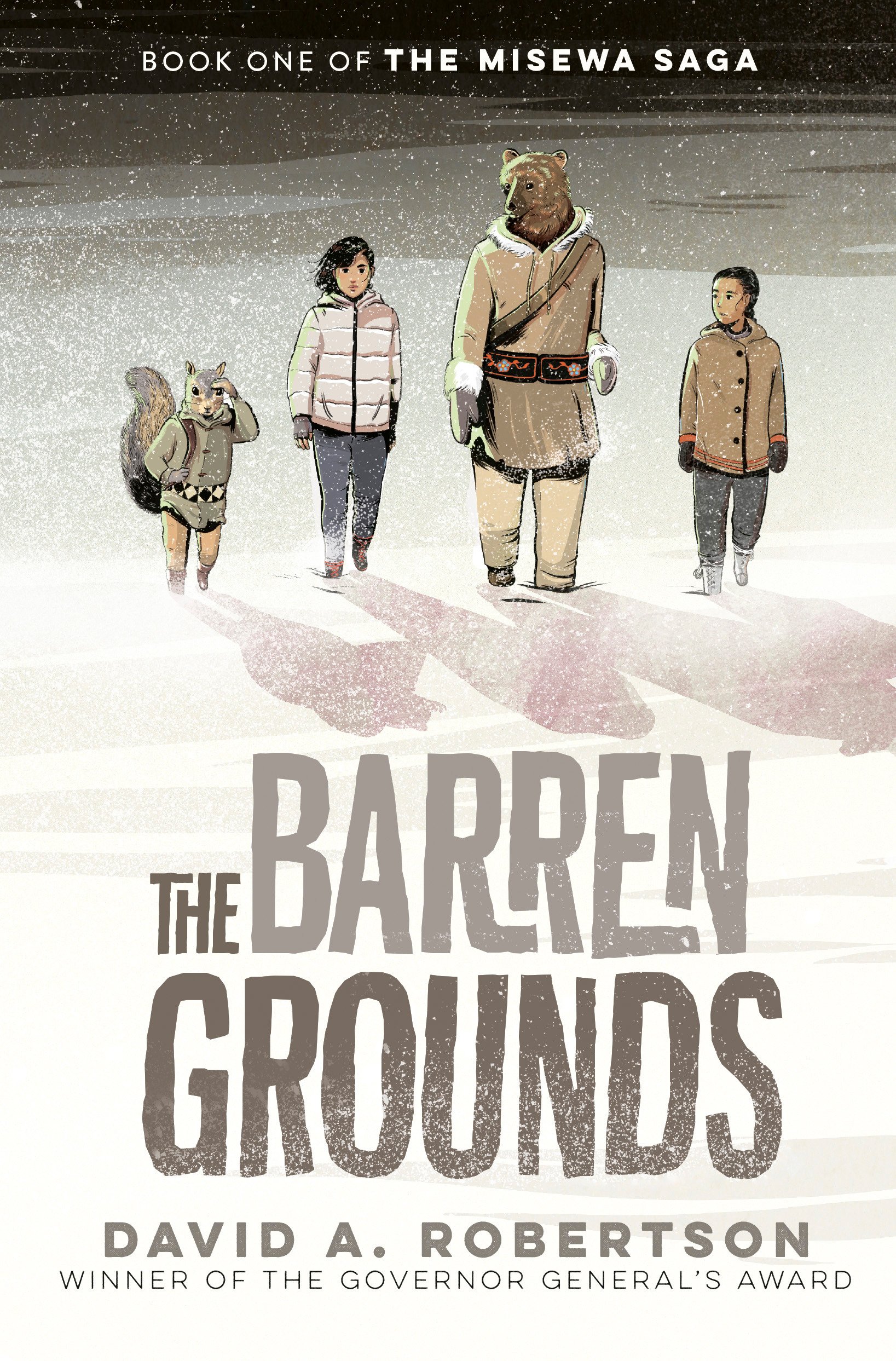 In The Barren Grounds, prolific author David A. Robertson proves that middle-grade fantasy is his jam (well, on top of YA, graphic novels, and picture books). With its Indigenous worldview, wisecracking animals, and thrilling canoe-chase climax, this work of speculative fiction speaks to readers way beyond its intended audience. Nor does it confine itself to the realm of fantasy: following two Winnipeg foster-kid protagonists, it shines a fictional light on the reality of far too many First Nations’ children.

Fifteen writers contributed short stories on the theme of Eid celebrations. The pieces are diverse in tone, set in various places around the world, and feature families who couldn’t be more different. While tradition and faith are weaved throughout, the emotion-filled collection mostly speaks directly to what kids appreciate about any celebratory holiday: family and community, good food and sweets – and presents.

This untraditional picture book has no kids and no plot – just random moments (a nature walk, a cup of tea, a nap) in the life of an old woman and her dog. But it captivates. Nahid Kazemi offers textured, rosy-hued illustrations, featuring intricate patterning and a visceral symbiotic body language between owner and pet, while Joanne Schwartz’s quiet, contemplative story gives kids a new perspective on people their great-grandparents’ age. 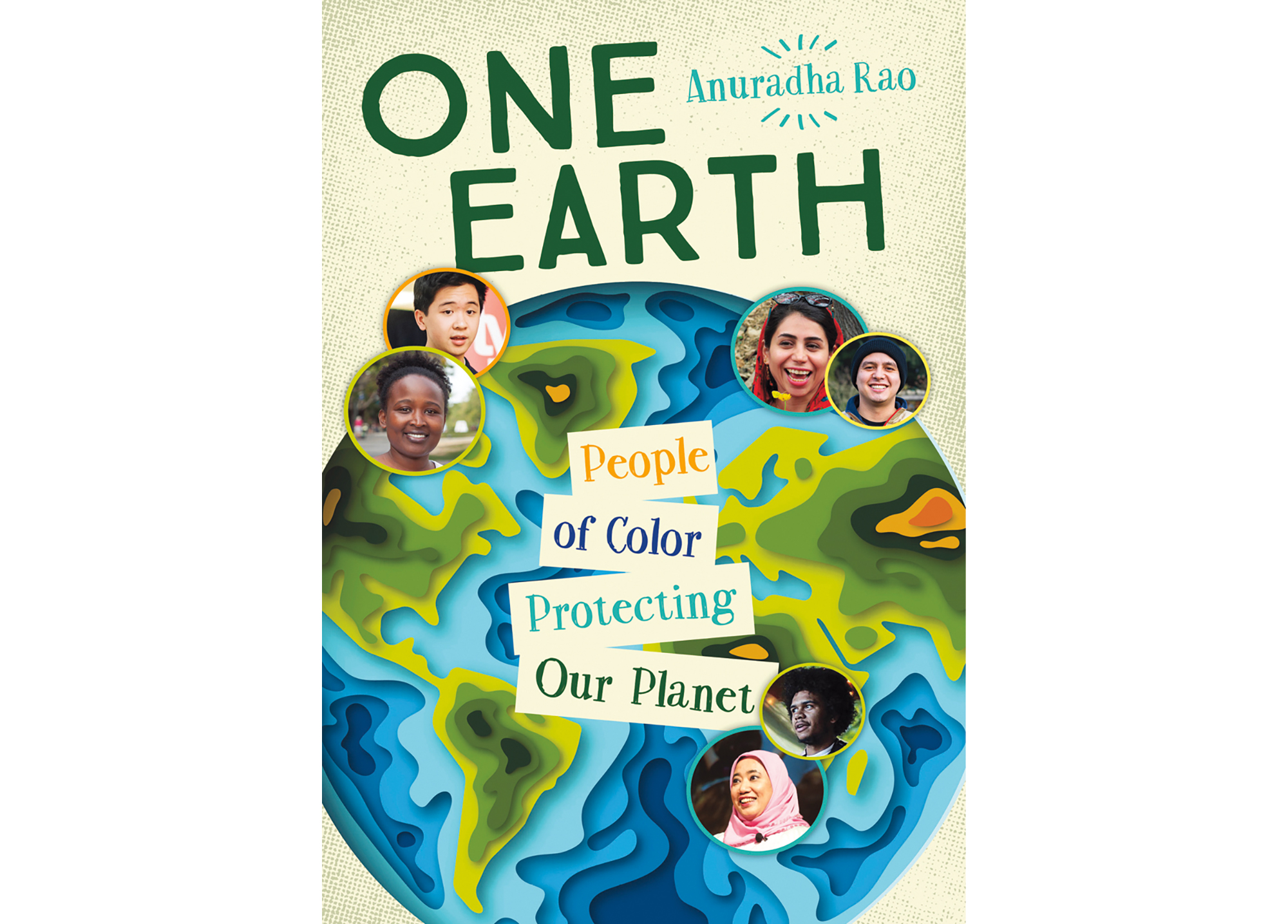 Given the dire tones of much environmentalism coverage, this inspiring non-fiction collection is a refreshing and accessible empowerment-focused narrative that is optimistic without downplaying the importance of changing our current environmental situation. –Lorisia MacLeod, The Alberta Library

A young girl walks down the street, peering up at some interestingly shaped windows in this wordless picture book. But when readers open the flaps to those windows, what’s revealed is a totally surreal, deliciously bonkers wonderland that makes Tim Burton and Picasso look bland. You have to see it to believe it. –Shannon Ozirny, West Vancouver Memorial Library

Protectors of the Planet: Environmental Trailblazers from 7 to 97
Jamie Bastedo
Red Deer Press

Author Jamie Bastedo shines a spotlight on 11 fascinating Canadians, including Anne Innes Dagg, who in the 1950s became the first person to study giraffes in the wild. Another subject of particular interest to Northerners is Cornelia Hahn Oberlander, a landscape architect who designed the grounds of our very own NWT Legislative Assembly. –Barb Paquin, Yellowknife Book Cellar

Inspired by the autobiographical writing of artist Emily Carr, Lauren Soloy’s debut picture book is beautifully made, from the case cover to end pages. The rhythmic and lively writing, along with detailed yet playful collage and watercolour illustrations, sets the reader right into the artist’s world of nature and wonder. –Angela J. Reynolds, Annapolis Valley Regional Library

Featuring a teen Muay Thai fighter, the novel does a wonderful job of showing the physical, mental, and emotional strength of women and girls. Plus, it describes the Caribbean/West Indian experience and culture – the food, music, celebrations, and more – in a way I connected to on a personal level. –Jonelle St. Aubyn, teacher-librarian in Brampton, Ontario

A young violinist reluctantly spends her summer in the Tasmanian rainforest with her uncle in this middle-grade novel, which beautifully incorporates music into the natural world setting. It’s a gentle read and does a fantastic job weaving family history with Australia’s killing of the Tasmanian tiger into extinction. –Ardo Omer, FOLD Kids Book Fest, Toronto

Ciel is a breezy novel about the life of a gender non-conforming trans preteen as they are about to start a new school. Ciel is such a charming character you want to spend time in their world, learning about their friends, family, and even their favourite brand of chips (spoiler: cottage cheese and pickle). –Khary Mathurin, Another Story Bookshop, Toronto 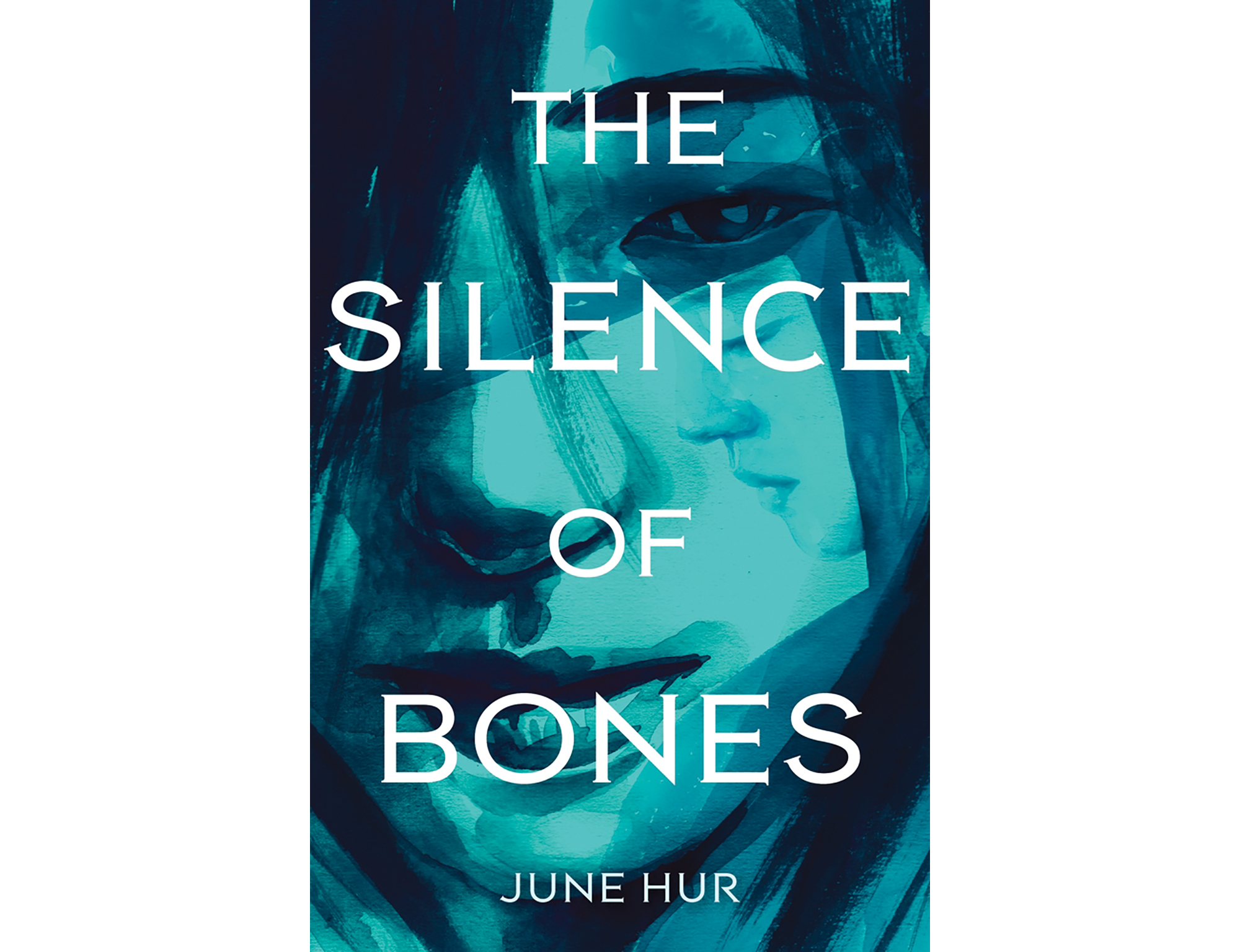 Set in 1800s Korea, a 16-year-old girl indentured to the Capital Police Bureau involves herself in a murder investigation to vindicate an inspector she deeply respects. Debut author June Hur effectively and thrillingly transports readers into the dynastic kingdom of Joseon, resulting in one of the most surprising breakout books of the year. –Helen Kubiw, CanLit for Little Canadians blog, Eden Mills, Ontario

Goerz recasts Sherlock and Watson as Shirley and Jamila, two 10-year-olds who solve (kid-sized) crimes. Featuring a Pakistani-Canadian protagonist and artwork that revels in its Toronto setting, this graphic novel brightened our summer and is the perfect start to a new series. –Hilary Atleo, Iron Dog Books, Vancouver 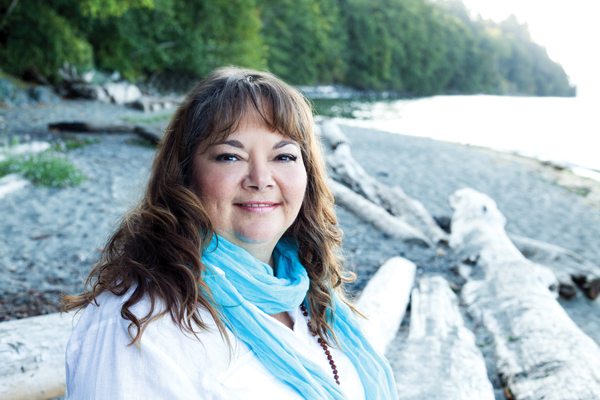 This picture book celebrates empathy, gratefulness, and kindness – both the giving and receiving. With its emphasis on how we are all related, including animals and the Earth, this is a must-have for home, classroom, and public and school libraries. –Colette Poitras, Indigenous Public Library Outreach, Edmonton

This Is Your Brain on Stereotypes: How Science Is Tackling Unconscious Bias
Tanya Lloyd Kyi and Drew Shannon, ill.
Kids Can Press

This concise yet substantial introduction to stereotypes and biases includes pivotal historical and current events, an overview of key scientific studies, accessible explanations of psychological phenomena, and prompts for self-reflection. Given our contemporary climate and pressing need to address our prejudices, this is indispensable reading. –Michelle Callaghan, Fab Book Reviews blog, Vancouver

This magical graphic-novel mystery has a Hardy Boys feel, and is a brilliant beginning to what I can only hope is a similarly long-running series. Toronto duo Nathan Page and Drew Shannon have crafted a rich, substantial story that’s both fantastical and retro. –Andrew Woodrow-Butcher, Little Island Comics, Toronto

Tags: 2020 Books of the Year, books for young people