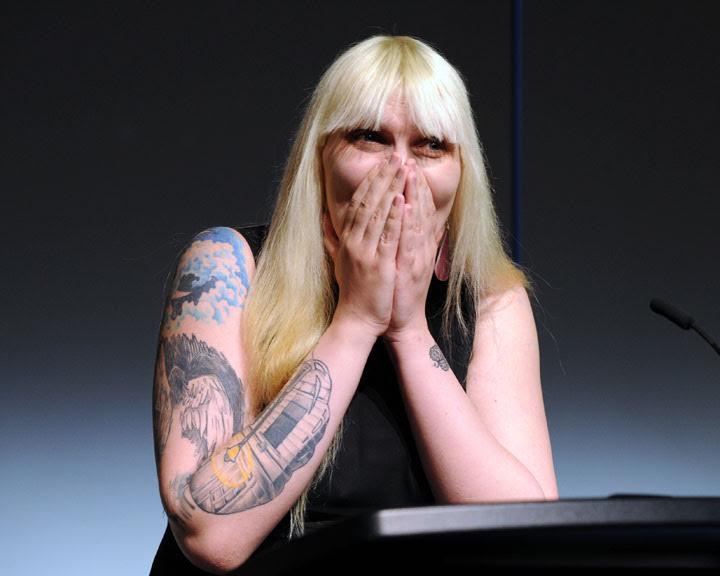 Windsor, Ontario, writer Casey Plett has won the $60,000 Amazon First Novel Award for her debut work of full-length fiction, Little Fish, published by Arsenal Pulp Press. Set during a Winnipeg winter, the novel tells the story of a 30-year-old trans woman who discovers that her grandfather might have been trans himself.

Plett, who previously won a Lambda Literary Award for her short-fiction collection A Safe Girl to Love, was greeted with an enthusiastic standing ovation when her name was announced last night at an award ceremony at the Globe and Mail Centre in downtown Toronto. The author expressed thanks to readers who have embraced “this story about a young, poor, sex-worker transsexual in Winnipeg dealing with poverty, addiction, and mental health.”

A jury composed of authors Diane Schoemperlen, Dimitri Nasrallah, and Doretta Lau selected Plett the winner from a six-person shortlist. In addition to Little Fish, Arsenal Pulp had another title in contention: Joshua Whitehead’s Jonny Appleseed.

The other shortlisted titles were:

Writing in Q&Q, reviewer Jonathan Valelly said of Little Fish, “For those of us outside [the trans] experience, we can only count ourselves lucky to have Plett’s novel, a book that invites us to witness something so important, so complex, and so tender.”

Also at last night’s ceremony, Jenniffer Meng was presented with the second annual Youth Short Story Award for her story, “Where Do All the Birds Go,” selected by juror (and former First Novel Award winner) Alix Hawley. Sixteen-year-old Meng thanked her teachers for providing her with the skills and opportunity to write and went on to decry the current Ontario government’s cutbacks to education in the province.

This year marks the 43rd anniversary for the First Novel Prize, which has previously been won by Michael Ondaatje, Rohinton Mistry, Anakana Schofield, and Katherena Vermette. Last year’s winner was Michael Kaan.

Of the experience judging this year’s prize, Schoemperlen said, “With so many great books to choose from, I have come away from the judging process feeling more confident than ever before that the future of the Canadian novel will continue to be vibrant, passionate, and always illuminating.”