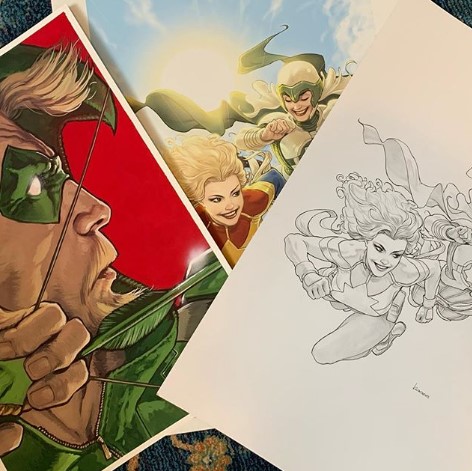 Some heroes wear capes, others just draw them. As booksellers across the country struggle to make rent after closing their retail spaces in compliance with COVID-19 precautions, a new online auction aims to raise money to keep friendly neighbourhood comic shops in business.

One hundred per cent of proceeds will go to Canadian comic-book stores, with auctions closing April 29 at 12 p.m. EST. The initiative mirrors #Creators4Comics, an American fundraiser that has raised hundreds of thousands of dollars for American retailers.

Along with mandatory closures, comic-book stores have faced inventory challenges since Diamond Comics Distributors abruptly stopped delivering new comic books after March 25. Diamond has since announced they will resume delivery in mid to late May.

#Creators4Comics adjacent! #Canucks4Comics! I’m starting an auction today (April 20) for one week to help some local stores. 2 pieces! Published OA variant covers! One is earmarked to Emerald Phoenix Comics and the other is for #Canucks4#Comics. Bidding only in my Instagram comments below. Winner announced end of the day on Monday April 27th! Please share! Green Arrow #43 is a variant cover and hand painted in acrylic gouache. Life Of Captain Marvel #5 was a 1:25 variant cover is hand rendered in pencil and ink and includes a digital printout. Bidding starts at $50 per piece. Please identify which one you are bidding on in comments! @juliebenson @shawnambenson #greenarrow #captainmarvel #dccomics #marvelcomics #originalart @awastudiosofficial … and if anyone knows how to change the order of my posted pics so I’m not opening with a giant eyeball in my Instagram thumbnail pleas post below! 😹 Full video over on my little YouTube channel— link in bio.