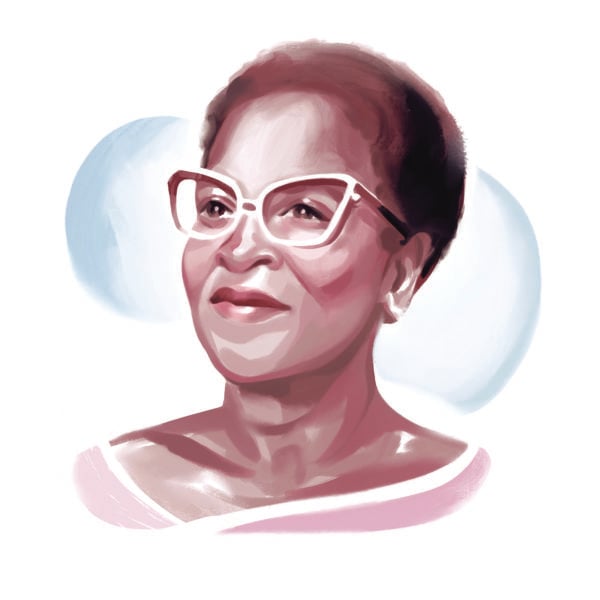 “Maybe we were crazy to buy a bookstore when bookstores were clearly going out of the marketplace,” says Itah Sadu, co-owner of Toronto’s A Different Booklist. Sadu and her partner, Miguel San Vicente, took over the Bathurst Street store in 1999, a year before the closure of the nearby Black-owned bookshop Third World Books. “I think, in hindsight, what made us get into the book business [was] not necessarily because of our love of literature and books, but for the conversation,” Sadu says. “We wanted to encourage the narrative that young people of African descent in Canada read more when they see themselves reflected in the books.”

A Different Booklist currently occupies a temporary 2,000-square-foot space at 779 Bathurst, almost directly across the street from its old location. The storefront boasts 10-foot-high windows and shelves full of texts. The new location is also home to A Different Booklist Cultural Centre: The People’s Residence. Created in 2016, the non-profit hosts author talks, lectures, children’s programs, and visual art exhibitions, among other events, all of which are free to the public.

The corner where the bookshop was formerly located now looks like a ghost town. The 2017 demolition of the historic Honest Ed’s department store and the accompanying Mirvish Village – which has turned the entire block into an unsightly hole – will eventually make way for condominiums and a market.

Sadu and San Vicente hope to purchase permanent space in the new development after its anticipated completion in 2021. In 2017, they launched a $2 million fundraising campaign, offering $100 memberships to the cultural centre that include access to professional learning and workspaces. They are also running a GoFundMe campaign to support the relocation and asking community members for help.

But despite the ongoing social and political changes in the neighbourhood, the store itself has remained a constant.

The store was opened in 1995 by Wesley Crichlow, a professor at University of Ontario Institute of Technology who specializes in Black LGBTQ criminology, critical equity, and diversity studies. He envisioned an alternative bookstore that combined books from his field with community outreach. In the intervening years, A Different Booklist has served as a nexus for inspiring Toronto’s Black diaspora, providing literature that centres Black authors, thinkers, poets, illustrators, and advocates.

When Crichlow decided to return to academic work, Sadu and San Vicente saw an opportunity. “We came to the bookstore because I was involved in the world of storytelling,” says Sadu, a children’s author who has published picture books with Scholastic Canada, Three O’Clock Press, and Groundwood Books. San Vicente was engaged in community organizing and labour politics. The two decided to combine their worlds and create a bookstore that would also serve as a meeting place focusing on literature, art, and activism.

Sadu refers to their strip of Bathurst as the “mecca of our history.” For 150 years, the street has been home to many Black establishments, including Mascoll Beauty Supply, Third World Books and Crafts, Too Black Guys, Joyce’s, and Lloyd’s Barber Shop. In his groundbreaking 1997 text, Black Like Who?, activist and academic Rinaldo Walcott described the street as a “ritualist locus” for Black migrant people who lived in “the in-between, neither here nor elsewhere.”

When Sadu and San Vicente took over A Different Booklist, the neighbourhood was going through a variety of changes. “[The bookstore] was coming at a time where this immediate community of young families were emerging, new families were moving in, [there was growing] diversity in the university,” says Sadu. “There was a big explosion of writing, especially people out of the Caribbean ancestry. We were also into a new generation of African writers from the continent.”

Today, the store continues to be a hub for the city’s Black diaspora. In 2018, the shop’s top sellers are primarily Canadian texts, including Policing Black Lives: State Violence in Canada from Slavery to the Present (Fernwood Publishing) by Robyn Maynard; Scarborough (Arsenal Pulp Press), the debut novel by Catherine Hernandez; and Africville (Groundwood), a picture book by Shauntay Grant and Eva Campbell.

Writer Kyrell Grant has worked at A Different Booklist for almost two years and is largely responsible for ordering titles. “I try to focus on Black women writers, like Angela Davis, Christina Sharpe, and Dionne Brand, and children’s books,” she says.

In addition to operating as a bookseller, the store’s reputation as a community centre (or what CBC journalist Amanda Parris calls an “organic” hub) has continued to grow. “You could look across the bookstore, and suddenly you see [your] cousin or a person you hadn’t seen in five or 10 years,” Sadu says.

In 2016, after sending out word in a newsletter of the impending move, 150 people volunteered to help Sadu and San Vicente carry boxes of books across the street to its new location. It is all part of the love and enthusiasm that has developed around A Different Booklist. “People come here and dare [to] imagine a filmmaker from Cuba showing their films or a visual arts show,” Sadu says.

What Sadu calls “the resilience of Black people” is on full display in the ongoing vitality of the shop and its cultural outreach. “People saw that a physical place could become a space.”