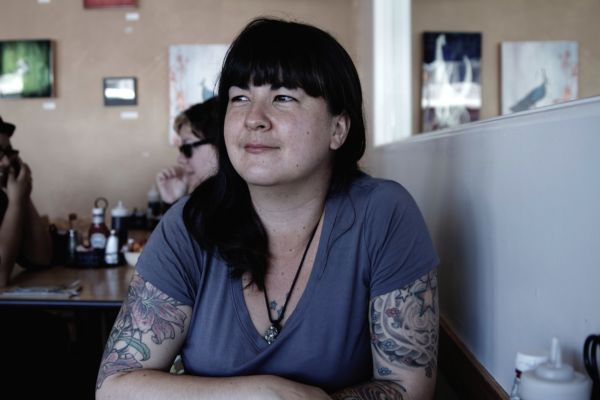 Mariko Tamaki really couldn’t have asked for a better October. The celebrated graphic novelist behind Skim, This One Summer, and the Lumberjanes series was in the midst of promoting her new DC Comics graphic novel, Harley Quinn: Breaking Glass, when she learned she had won a Harvey Award for her YA graphic novel Laura Dean Keeps Breaking Up With Me, which was illustrated by Rosemary Valero-O’Connell. Also this month, Tamaki announced her entry into the publishing world via Surely Books, an imprint with New York publisher Abrams Books.

Surely Books will be dedicated to publishing queer creators and, although Tamaki targets her own writing at teens, she primarily plans to publish a wide range of fiction and non-fiction titles for an adult audience.  Starting in the spring of 2021, the imprint will publish three to four books per season, two seasons a year. The inaugural lineup will include a biography of American novelist and short-story writer Patricia Highsmith, a deep dive into the life of Revolutionary War hero Baron von Stueben, and a fictional graphic novel by Terry Blas and Claudia Aguirre.

How did Surely Books come to be?
My partner came up with the idea. I’d been talking about the sorts of books that I want to exist, especially in terms of queer history. And I’ve been so inspired by the ways that comics have been able to take a piece of queer history, or a piece of history in general, and make it part of the current pop culture conversation.

There are different books that I wish I could read, but I don’t want to write. Still, I thought somebody could write them. And my girlfriend was like, can you start an imprint? So I ended up talking to Abrams about it. I’ve had really positive experiences working with Abrams on the Lumberjanes books. I enjoy and respect the people I work with there. And it just sort of worked out.

Why name it Surely Books?
It came from somebody at Abrams. We were brainstorming names, and she came up with it, and I liked it – I love that it’s so light and silly. But it also seems like “surely this will happen.” It’s just very positive, and it’s growing on me as I say it to more people. It’s a name that makes me smile, like it does for most people. I’m into that.

Why did you choose to start with two biographies?
They’re both people living in different times. The Baron von Steuben biography is a story of what it meant to be queer before it was socially accepted. The two authors, Josh Trujillo and Levi Hastings, wrote this really incredible short comic about Baron von Steuben, and this is a chance to expand that story.

And I think the Patricia Highsmith book is a very complicated story, because Patricia Highsmith was a very complicated person. I think knowing more about queer lives and what queer lives look like is important. What kind of life is behind that kind of creative output? I think it’s really interesting. And Grace Ellis is just an incredible comic book writer and I’m super excited to see her work on something of this scale.

How about the graphic novel by Terry Blas and Claudia Aguirre? Everything I’ve read teases us with group of friends who make a surprising discovery – and that’s all. Can you tell us anything else about it?
I will tell you I think that Blas is a dynamic, incredible writer. He has such a great way of writing an ensemble cast, and the stories he tells are so full of amazing ideas. So I’m very excited for people to read his book. I’ll also say that when I read the pitch for this book, I shrieked because I was so into it. So, I hope other people like it too.

Now that you have your own imprint, what’s your dream project?
I’m a big non-fiction fan. I’ve been really interested in the history of the AIDS crisis, and the legal history that’s associated with the queer population. I’m calling all nerds, really, whether you’re an archive nerd or queer history nerd or whatever you are. Part of what I’m hoping for are projects that really dig into our history and present something complicated.