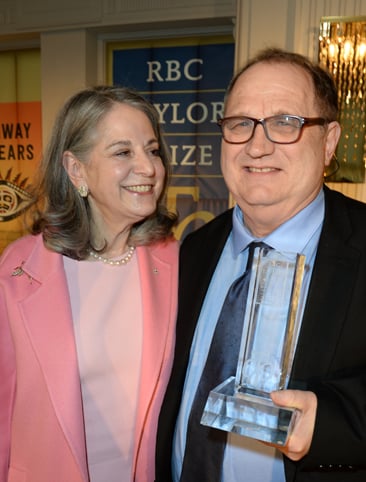 Ottawa journalist and historian Mark Bourrie is the 20th and final winner of the RBC Taylor Prize for literary non-fiction. He takes home the $30,000 purse for his latest book, Bush Runner: The Adventures of Pierre-Esprit Radisson, published by Biblioasis.

The book was selected from a shortlist of five titles by a jury comprising author Margaret Atwood, English professor Coral Ann Howells, and writer and translator Peter Theroux, each of whom read all 155 submitted titles. Atwood – who was in Perth, Australia, promoting her novel The Testaments – was unable to attend today’s luncheon event at Toronto’s King Edward Hotel. Howells, who previously sat on the jury in 2014, described this year’s selection process as “slightly more brisk” than her last Taylor jurying experience. She praised the breadth of all the submissions for their overall strong narrative interest.

Prize founder Noreen Taylor received a standing ovation as she addressed the crowd for a final time. She reminisced briefly about the prize’s inception and thanked its staff before turning to this year’s awards. “This is not a day for reflection on the past,” said Taylor. “It’s about the present.”

Bourrie is the author of several books including Kill the Messengers: Stephen Harper’s Assault on Your Right to Know, and currently teaches history at Carleton University and Canadian studies at University of Ottawa. The jury compared Bourrie’s writing in Bush Runner to “Jonathan Swift at his edgiest,” calling Radisson a “humane con artist of heroic stamina and fluid loyalties.”

“For a long time I wondered if anybody cared about what I wrote. People do,” said an emotional Bourrie. He recalled how the manuscript had been making the rounds to various publishing houses for 14 years before editor Janice Zawerbny brought it to Biblioasis publisher Dan Wells.

Each of the Taylor Prize finalists takes home $5,000. The shortlisted books were: